Why Basquiat Still Matters 30 Years After His Death 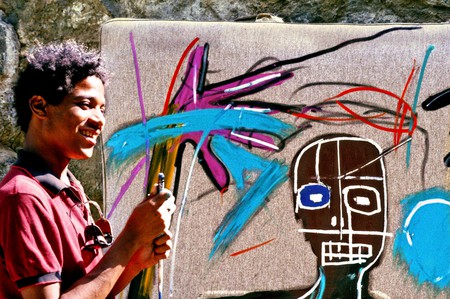 This is how Jean-Michel Basquiat pervaded the art world at 20, beguiled the industry’s leading figures and became the most expensive American artist at auction.

In May 2017, the late Jean-Michel Basquiat made history at Sotheby’s New York when his untitled painting of a menacing skull sold for $110.5 million – the highest sum ever paid at auction for an American artwork. The sale dethroned Basquiat’s close friend and professional advocate Andy Warhol, whose Silver Car Crash (Double Disaster) (1963) sold in 2013 for $105 million. So, the question is: what makes Basquiat’s work worth such a dizzying fortune?

“You have to consider the landscape [in which] Basquiat appears,” says Alex Rotter, Chairman of Post-war and Contemporary Art at Christie’s New York. The artist’s emergence in the late 1970s was primed by the emotive spontaneity of ’50s Abstract Expressionism, the ’60s Pop-art movement (an elevation of pop culture to high art) and the conceptual Minimalism of the ’70s, which distilled exalted subjects into fundamental shapes and colors. “Then the ’80s came around,” Rotter says. “In pop and art culture, every expression was allowed. Suddenly [art] didn’t have to be heavily intellectual anymore.” 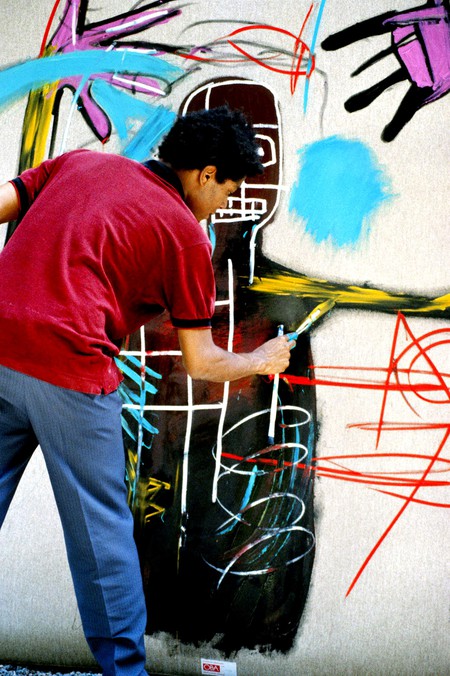 It was 1980 when a vagrant high-school dropout with confidence beyond his years approached Andy Warhol in a Soho restaurant to sell the illustrious Pop artist a postcard of his work. By that time, Basquiat had whipped up intrigue as one half of SAMO©, a short-lived but locally recognized street-art collaboration between the artist and his friend Al Diaz that ceased around 1979. Basquiat’s big break came only months after his first encounter with Warhol, when he was included in the 1980 Midtown exhibition, The Times Square Art Show.

Basquiat’s genius was immediately noted by critics, but Warhol became one of the painter’s first notable champions when he recognized how revolutionary Basquiat’s oeuvre was. “Basquiat made references to black culture and his style of painting was really radical – nobody had ever seen this before,” Rotter tells Culture Trip. His paintings were composed of “deep, random thoughts,” and “he used the canvas as a blackboard with words as well as painterly expression.”

Basquiat’s erratic, unexplained symbols – the crown, the skull, the boxer – enthralled the art world. “The definitions of each symbol are based on the interpretation of art historians,” says Rotter, though Basquiat’s intention to elevate his African-American heroes with marks of strength and royalty was apparent. Black musicians and athletes like boxer Muhammad Ali and drummer Max Roach figured heavily in Basquiat’s work. He was deeply moved by jazz in particular, which inspired paintings such as Bird on Money (1981) – a tribute to saxophonist Charlie Parker, whose nickname was ‘Bird’ – and King Zulu (1986), which depicts trumpeter Louis Armstrong dressed as ‘King Zulu’ at Mardi Gras in 1949. 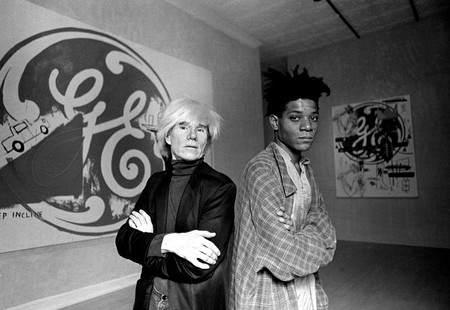 By ennobling other influential African-American figures, Basquiat became one of the most respected and sought-after artists of color in history. “There were other African-American artists before him – he was not the first one – but he was the first one that was accepted into high society,” Rotter says. Despite this, Basquiat remained “hugely, uncomfortably, constantly aware of the racist ways he was constantly being pigeonholed,” as curator Eleanor Nairne explained to The New York Times ahead of the 2017 Boom for Real exhibition at London’s Barbican Centre.

Basquiat was only 22 when he painted Untitled (1982), which features a raging black skull grimacing against a blue background detailed with letters and tally marks. Writing for The Guardian, art critic Jonathon Jones says of the piece: “Perhaps the street mathematician was calculating how many Africans died on slave ships in the 18th century, or how many people lived in slavery in America, or how many young black men have been killed by police guns in the last few years.”

Basquiat used his cultural authority to defy the racist limitations established by American history and society. He commanded the attention of gallerists like Larry Gagosian and rockstars like David Bowie. His tireless hustle released him from homelessness. He went on to date Madonna. He was the youngest artist to exhibit at the prestigious Whitney Biennial in 1983. He landed a New York Times cover in 1985. When he died of a heroin overdose at his East Village studio in 1988, his tragic demise marked the burnout of New York City’s brightest art star – ‘The Radiant Child’, as Artforum’s Rene Ricard famously dubbed him. 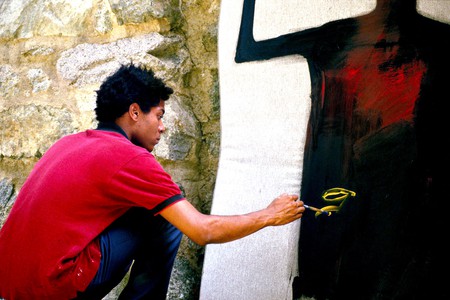 A scene from 'The Radiant Child' (2010), directed by Tamra Davis | © Pretty/Kobal/REX/Shutterstock

Basquiat’s career was staggeringly impactful, despite lasting only eight years. August 12 2018 marked 30 years since the artist’s death at 27 years old. In less than a decade, Basquiat infiltrated an exclusive and predominantly white industry with a voracity that had never been seen before. Fearless youth, heightened creativity and insatiable drive made Basquiat the cultural messiah everyone had been waiting for. He beckoned a new age of unbridled artistic expression and came to define New York City culture in the 1980s.

“He had eight years of a career, which was shorter than any other major artist,” Rotter notes. “He was wild – he got everything out of life and everything out of painting. In his last two years, he knew what was going to happen. His last painting was called Riding with Death – and in 1988, he died.” Basquiat embodied the grit and promise of 1980s New York, and his priceless contributions to the city’s culture put that $111 million price tag in perspective.