Where Was the #MeToo Movement at New York Fashion Week? 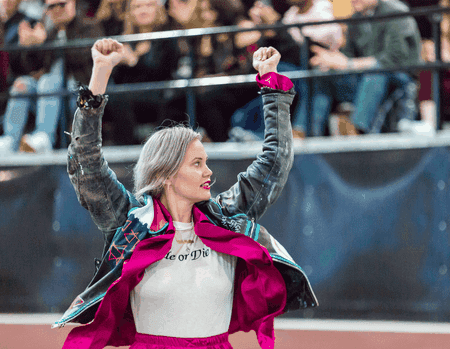 At a recent event at Soho’s chapter of The Wing, New York’s women-only social club, veteran designer Diane von Furstenberg in conversation with Instagram’s Eva Chen, told women to “denounce the pigs!” and, in the same breath, urged them to “cherish and water your strength.” The room was packed wall-to-wall with feminists and fashion activists, eager to politicize the clothes on our backs. Yet three months later, with the Time’s Up and #MeToo movement showing no sign of relenting, its presence remained on the fringes of New York Fashion Week (NYFW). 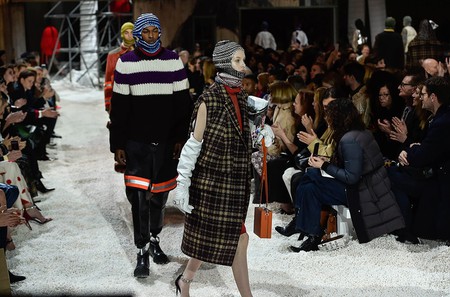 On February 13, Raf Simons for Calvin Klein staged an elaborate show where the runways were made of popcorn, a curious metaphor in such politicized times. Last season, political slogans emblazoned on garments, diversity in models on the catwalk, and campaigns dedicated to raising funds for Planned Parenthood positioned fashion as one of the most woke industries in Trump’s America. With Simons’s popcorn runway, has fashion week become merely a spectacle, entertainment to be consumed? 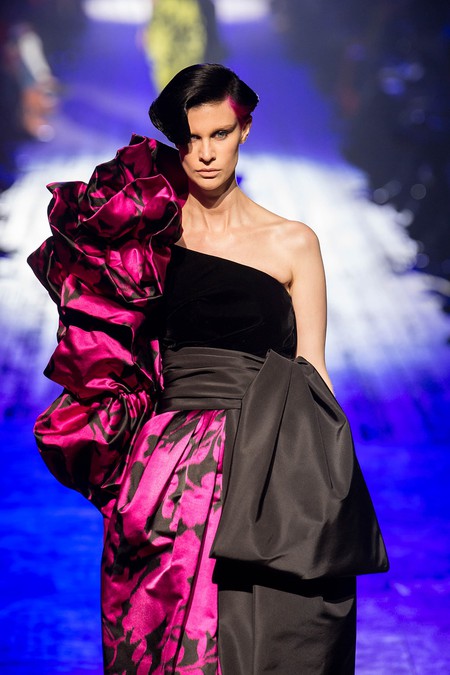 And at Marc Jacobs, the maximalism, from oversized shoulder pads, baggy trousers, and an abundance of fuchsia weren’t the only things channelling an ’80s vibe, a time when Reagan’s promise of “Morning in America” eclipsed the failure of the Equal Rights Amendment a decade prior. Outside Marc Jacobs’s show at Park Avenue Armory, PETA demonstrators protested the designer’s use of fur in his AW18 collection. What happened to Time’s Up?

Where was the #MeToo movement?

Earlier in the week at Brock Collection, helmed by Kristopher Brock and Laura Vassar, the look was undeniably romantic, recalling classic Lagerfeld (a look the designer himself returned to last month for Chanel’s dreamy princess gown collection at Paris Haute Couture Week). Is #MeToo having a backlash on the runways? How strange a turn from last year, when politics were the agenda of every major show.

This is not to say that the #MeToo movement had no presence at New York Fashion Week AW18. Prabal Gurung had the founder of the #MeToo movement Tarana Burke sitting in the front row. Gurung’s collection drew inspiration from China’s matriarchal Mouso tribes and northern India’s Gulabi Gang of female activists. According to an interview with AOL, Gurung said his color palette for this collection was inspired by the latter’s pink saris, which are “symbolic of their self-proclaimed power and fearlessness.”

Gurung, who brought political messaging to the catwalk with a collection of slogan T-shirts for AW17 (“Love is Love,” “Girls Just Want to Have Fundamental Rights,” “This is What a Feminist Looks Like”), not only continued to knit fashion and activism this season, he evolved it. Sloganism is easy; it’s accessible. By drawing on the dressing habits of matriarchal cultures, Gurung shows his investment to the civil rights of women worldwide, while also inviting wearers to see garments as more than the clothes on our backs. To Gurung, they should be seen as markers of identity that refuse to be silenced, a hallmark of the #MeToo movement. 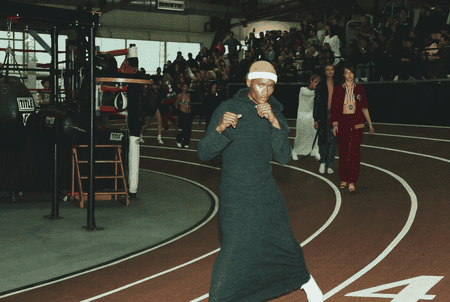 At Músed by Lindsay Jones, transgender models took to the track at Chelsea Piers in a collection called Team Planet Earth, a response to the current political climate. “Team Planet Earth is about Gaia, Earth, and Medea—matriarchy meets planet Earth,” Jones, an ardent activist and single mother says. Recently, Jones spoke out about an experience she had in 2007 with photographer Terry Richardson, when she was assisting at labels like Marc Jacobs and Zac Posen, as well as modeling. Jones went on record in a December 2017 HuffPost article alleging that Richardson sexually assaulted her at a meeting arranged to discuss ideation of a potential photo shoot. Before she barely got through the door, Jones told the Huffington Post that Richardson pulled out his penis, asked her to “suck his d*ck,” and then stuck his penis in her eye socket.

This season, Jones took to the track wearing a vintage leather jacket, on which she hand-painted recycling symbology, one of the collection’s statements: exploring notions of sustainability and up-cycling the past. In her final walk, Jones is unmistakably triumphant.

Finally, the most visibility the #MeToo movement saw at NYFW AW18 was not something designed for the fashion set, editors, influencers, or bloggers. It was a fashion show specifically dedicated to representing the voices of women who are survivors of sexual assault, rape, and harassment. Thrown at the Yotel Hotel by designer Myriam Chalek, creative director of the label American Wardrobe, dressed sexual misconduct survivors in her line, as well as that of designer Minika Ko. To conclude the models’ traipse down the runway, women then handcuffed themselves to male models wearing pig heads. They then told their stories. Chalek’s designs featured a range of leather and lace, to signify the how women can be both fragile and warriors at the same time.

The event felt less of a fashion moment and more of a town hall meeting, where approximately 200 attendees listened to the voices of the #MeToo movement, and Von Furstenberg’s words—which came from the French iteration of the #MeToo movement—were literally heeded. The pigs were denounced. The world of fashion has always flirted with fantasy, yet simultaneously served as a mirror of social consciousness. What this editor took away from NYFW AW18 is that maybe we were so woke, we fell asleep again. Personal experience rather than cultural zeitgeist seemed to determine the extent to which Time’s Up, at least at this NYFW.