Where and When To See Manhattanhenge 2020 in New York City 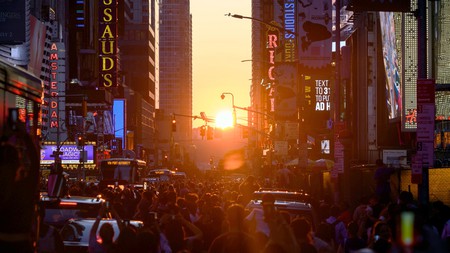 Manhattanhenge is a stunning sight, when you can watch the sun set down the street | © JOHANNES EISELE / AFP via Getty Images

At certain times each year, the streets of Manhattan fall under the solar spell of what’s known as the Manhattan Solstice – when the direction that the sun rises and sets aligns with the borough’s east-to-west gridded streets. It’s an incredible phenomenon, when nature and the urban landscape collide – and here’s how best to view it. 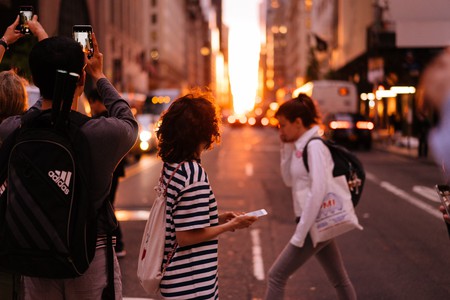 What is Manhattanhenge and how does it happen?

Manhattanhenge occurs when the sun aligns perfectly with Manhattan’s grid streets. It’s a spectacle that draws thousands keen to snap the sun between the skyscrapers, and it occurs four times a year, twice at sunrise and twice at sunset, at some time around the summer and winter solstices. The remaining date for the sunrise this year is roughly November 29-30, according to USA Today, while the sunset is expected to occur on July 11-12.

When city planners created the New York borough’s grid in the 1800s, they designed long north-to-south streets on the island of Manhattan with the short cross streets at a 90-degree angle. It means that from many of these cross streets, looking either east or west, you get to see the sun either come up amid the skyscrapers, or melt away if you’re looking west. The streets are actually on a 29-degree slant, so they don’t go from due west to due east.

The sunset is generally a lot more spectacular, because there’s less going on in New Jersey, especially by the Hudson River, than in the east, according to astrophysicist Jackie Faherty, who calculates the exact dates and times the henge takes place. It varies slightly each year because of events such as leap year. “People plan their vacations around coming to NYC to see it,” she told USA Today. And when you look at the pictures of this impressive event, you can see why. 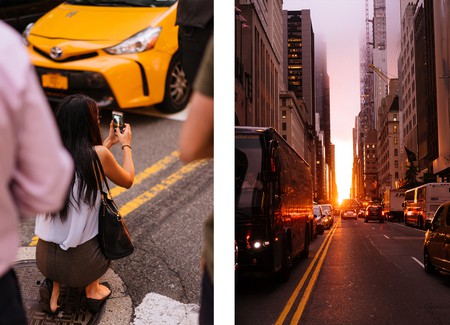 When and where can you see Manhattanhenge in 2020?

The first of this year’s Manhattanhenge sunsets occurred on Friday May 29 at 8.13pm EDT, when Manhattanites witnessed a half sun on the grid if they stood on an east-west numbered street and looked west towards the Hudson River. The following evening, on Saturday May 30 at 8.14pm EDT, you could see the full sun on the grid, with the entire outline sitting on top of the horizon, perched between the buildings. 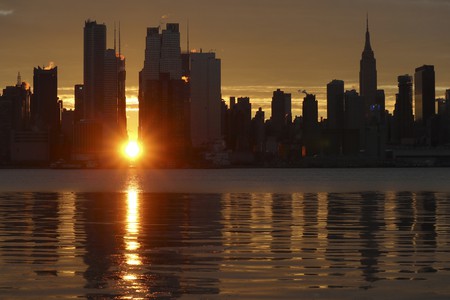 According to the American Museum of Natural History, the best locations to have a clear view of Manhattanhenge include intersections at 14th, 23rd, 34th, 42nd and 57th, and a number of streets next to them. For particularly spectacular views, head to the Empire State Building on 34th, or the Chrysler Building on 42nd Street. 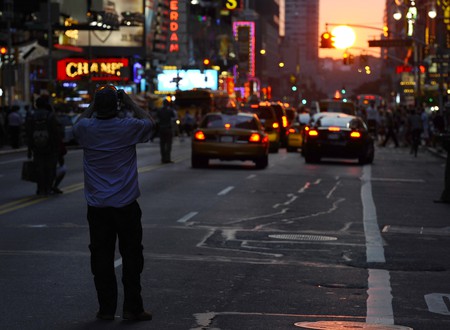 Why is it called Manhattanhenge?

The term was coined by astrophysicist Neil deGrasse Tyson and it refers to Stonehenge, the neolithic monument in southwest England that was constructed 5,000 years ago to align with the midsummer sunrise and the midwinter sunset, and by which Tyson, a native New Yorker, said the concept of Manhattanhenge was inspired by a childhood visit to the ancient stone structure in Wiltshire. In 2019, Manhattanhenge was officially added to the Oxford English Dictionary. 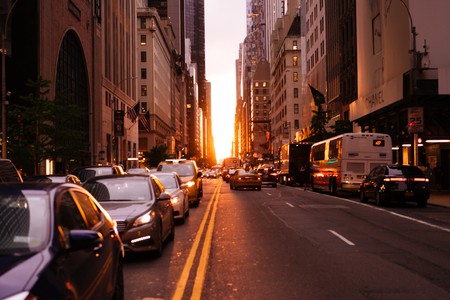 However, whereas Stonehenge served a purpose throughout history to help people understand the time of year, Manhattanhenge is accidental.