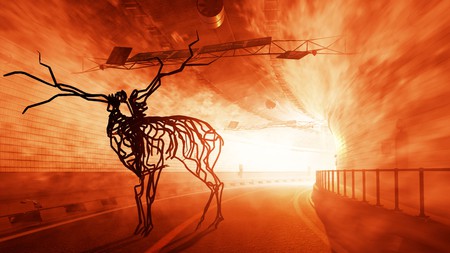 A still from Apex | Courtesy of Wevr

Standing on a city rooftop, I shuffle slowly towards the edge of the building and look nervously down. My eye is suddenly drawn to a ball of flame on the horizon, hurtling towards me at an alarming speed, prepared to end the world as I know it. Luckily, I’m not about to be incinerated in a nuclear blast: this is virtual reality.

Arjan van Meerten’s new film, Apex, puts users in the middle of an apocalyptic nightmare. The striking visuals, including gigantic human-type figures, skeletal deer, and lots and lots of fire, rush at you at high speed, while van Meerten’s original score adds to the feeling of exhilaration crossed with catastrophe.

The result is an extremely powerful, and immersive, film.

“The key was to have something that overwhelms you with a lot of force and that’s why everything comes at your face and everything is complete destruction,” explains van Meerten. “The aggression and the energy of this undetermined power was something I also envisioned with metal music when I was young. For me it’s like the feeling I had when I experienced a metal concert when I was young and the feeling I wanted to recreate.”

The film was produced in partnership with Wevr, an L.A.-based company helping bring virtual reality projects to life. “We’re constantly looking for artists that are deeply creative and are exploring the medium,” says Wevr co-founder, and Apex Executive Producer Anthony Batt. 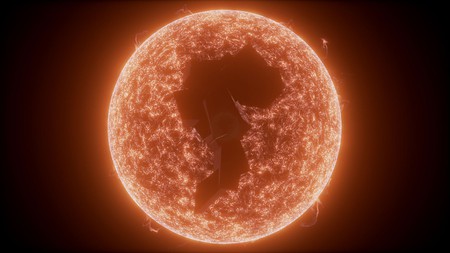 Apex is van Meerten’s follow up to his debut film, Surge. It was the reaction to that film around three years ago that made Batt and Wevr keen to work with the Dutch director.

The film is exceptional, but it’s also short, and the narrative, as with a lot of virtual reality films, is loose and open to a lot of interpretation. That doesn’t take anything away from the dream-like experience of Apex, but does speak to the direction virtual reality movies could take in the future.

“As time goes on I think people are going to create more experiences that really sit you down in them, figuratively,” says Batt. “This is the beginning and artists like Arjan are really just exploring this. If you look down the road in years to come these projects are going to be a lot longer and you’re going to have more connection with them as you spend more time in them.”

Many believe immersive filmmakers will have to solve the problem of narrative in order to keep audience engaged, but van Meerten doesn’t see it as a priority.

“You don’t need to have a strong narrative to keep people captivated for a long period of time, the interactivity of the viewer is a strong part of VR. If you can interact with the surroundings it’s more captivating for people wanting to stay there,” he says.

Apex is being shown at this year’s Tribeca Film Festival, as part of the Immersive collection of films. This is Immersive’s second year at the New York festival, and shows a willingness from the film industry to embrace virtual reality as a platform.

“Film festivals like Tribeca and Sundance and Toronto, they know that their audience of film viewers are shifting to use technology more and more. They’ve spotted VR as a narrative trend that has a corollary with filmmakers rather than video games,” says Batt. “There’s been a warm embrace.”