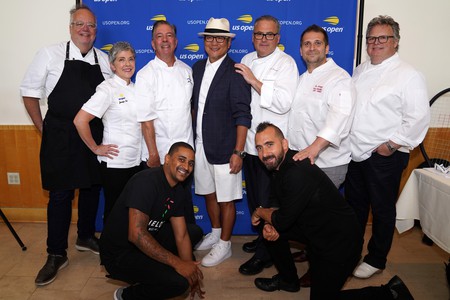 The US Open is celebrating its 50th anniversary in 2018. In honor of that milestone, the United States Tennis Association (USTA) and hospitality partner Levy have introduced several new dining options for patrons around the USTA Billie Jean King National Tennis Center grounds in Flushing, NY.

More than 700,000 guests are served annually at the Food Village, various restaurants and other on-site concessions areas at the US Open. Everything from piri piri salmon with pineapple black rice to lemongrass chicken bánh mì is on offer for visitors to the 2018 event.

Here are the culinary masterminds behind the mouthwatering fare at the 2018 US Open and a sample of what they’re cooking.

Chef Brown has worked in some of the most celebrated kitchens around the world for more than 30 years. His work has been acknowledged by numerous New York Times stars and he has received a Michelin star. The 1983 graduate of the Culinary Institute of America reconceptualized ACES by Ed Brown, the premium seafood restaurant that operates during all 14 days of the US Open.

One of the pioneers of contemporary American cooking, Burke blurs the lines between chef, artist, entrepreneur and inventor. A graduate of the Culinary Institute of America and a student at Ecole Lenotre Pastry School in Plaisir, Burke has worked with legendary chefs in France and New York.

Always causing a racket. Celebrating my 10th year at the @usopen !

Capon is the executive chef partner behind Downtown NYC favorites Lure Fishbar, B&B Winepub, ElToro Blanco and Bowery Meat Company. After cutting his teeth at Burke’s Park Avenue Cafe, Capon was offered an exchange opportunity to work in Europe and spent the following year crafting his skills in restaurants throughout France, Italy, Germany and Spain.

Chef Chang is the founder of Momofuku, which boasts restaurants in New York City, Washington DC, Sydney, Toronto and Las Vegas. Chang has been honored with five James Beard Foundation Awards since opening the first Momofuku in 2004. Momofuku Ko has two Michelin stars, which it has retained since 2009.

Making his US Open debut, Forgione is the chef/owner of Restaurant Marc Forgione and American Cut. He won the third season of Food Network’s The Next Iron Chef, becoming the youngest winner in the show’s history.

Johnson is a James Beard-nominated chef known for cooking the food of the African diaspora. He is previewing his new restaurant FIELDTRIP – opening in fall 2018 in Harlem – at the US Open this summer.

A James Beard award winner, Mantuano has been instrumental in defining true Italian cuisine in the United States. He is a chef and partner at Spiaggia and River Roast, both in Chicago.

Morimoto bridges the culinary traditions of his native Japan and the US. Morimoto first competed on Japanese show Iron Chef in 1998 and became a star of Food Network’s Iron Chef America in 1999. He has restaurants in Mexico City, Bangkok, Las Vegas and New York City.

US Open highlights: Chef’s sushi and sashimi of the day

Samuelsson is the acclaimed chef behind Red Rooster Harlem, Ginny’s Supper Club, Streetbird Rotisserie and Marcus’s Bermuda at the Hamilton Princess and Beach Club. Samuelsson is the youngest chef to receive a three-star review from the New York Times and has won multiple James Beard Foundation awards.