At The Met, How Thomas Cole's Foreign Roots Made Him an Americana Art Star 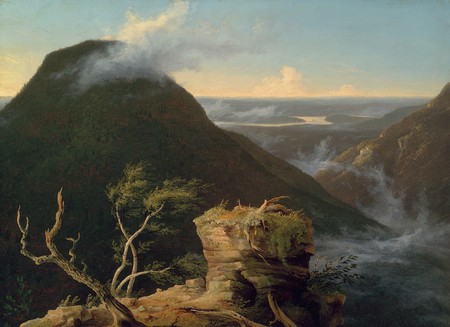 Thomas Cole. View of the Round-Top in the Catskill Mountains (Sunny Morning on the Hudson), 1827 | © Museum of Fine Arts, Boston

Credited with founding the mid-19th-century landscape art movement known as the Hudson River School, Thomas Cole’s (1801–1848) romantic oeuvre is one of unbridled pastoral grandeur. His untamed vistas showcase the sublime natural beauty of New York, New England, and beyond—yet The Met’s current survey of Cole’s influential practice, titled Thomas Cole’s Journey: Atlantic Crossings, is keen to remind viewers that the artist was not native to the lands he so skillfully painted.

Thomas Cole’s unparalleled renderings of the East Coast wilderness possess a clear reverence for the North American landscape. Indeed, how else could Cole have painted with such exuberance without sincere admiration for the terrain? However, his appreciation of these bucolic panoramas was also in direct juxtaposition to his upbringing in northern England. 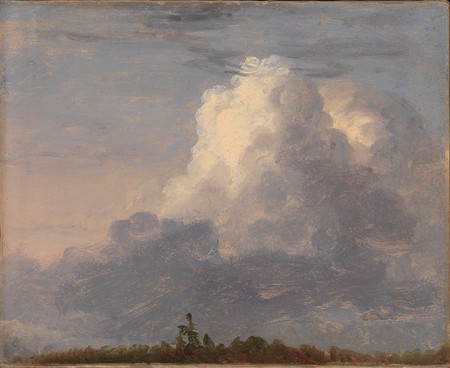 Born just outside of Manchester during the thick of the Industrial Revolution, Cole was raised in a fire-and-brimstone age of smoggy harbors and infernal mills. There, he was subjected to a childhood of pollution, overpopulation, and economic hardship; the failure of his father’s business prompted a teenaged Cole to find employment in a cotton mill, and later as an engraver in a factory producing blocks used to print designs on fabrics.

Cole and his family moved to the equally tumultuous city of Liverpool in 1817, where the artist-to-be toiled in an engraver’s workshop. Printed works that circulated the studio likely piqued his growing interest in pursuing art professionally. While many Romantic artists sought to escape the horrors of the machine with portrayals of the Arcadian countryside, paramount art historical figures such as J.M.W. Turner took inspiration from the hellish cityscapes of their day. At The Met, Turner’s expressive depictions inform the “demonic spectacle” (as an exhibition label describes it) that was industrial Britain—and provide visual context for the environment in which Cole grew up. 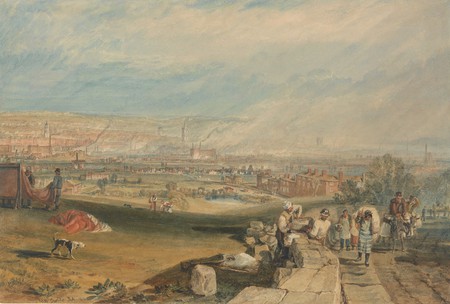 It was 1818 when the Coles left their arduous lives in England for the promising shores of the United States, where landscape art—an already established art form in the United Kingdom—was a virtually unexplored realm. Cole initially settled with his parents and three sisters in Philadelphia before moving to New York in 1825, determined to find success as one of America’s preeminent landscape painters.

Early works by the burgeoning artist exhibit supreme luminosity and exquisite detail. In the summer of 1825, Cole traveled up the Hudson River by steamboat, taking the Catskill region as his muse. Omitting signs of settlement in most of his renderings, Cole’s New York was primal and verdant. It was everything that the life he left behind in England was not. 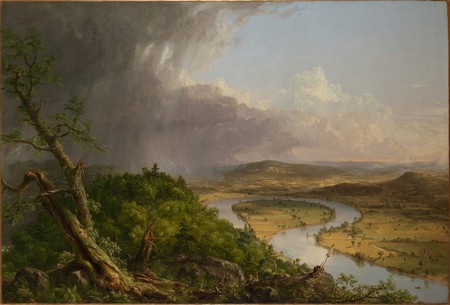 Yet it was in London that so many prized works were being exhibited, and in the summer of 1829, Cole returned to his native country—this time to England’s capital, which he visited for the first time. From the National Gallery to the Royal Academy, Cole took in the splendors of his predecessors and contemporaries; particularly John Constable, a distinguished landscape painter whose Hadleigh Castle (1828-1829), a serene depiction of a ruined castle in Essex, England, “haunted Cole for the rest of his life.” Cole and Constable would eventually form a friendship, and Cole would take long-lasting inspiration from Constable’s body of work.

Cole’s work in London, however, flew largely under the radar. So he moved on to Italy in 1831, following a brief stint in Paris. In Florence, Cole studied the human figure and sketched the unparalleled Tuscan countryside. In Rome, he was awed by the city’s magnificent feats of ancient and Renaissance architecture. It was during his time in Italy that Cole found patronage and worked prolifically. Upon returning to the United States in 1832, he would continue to draw and paint ancient ruins. 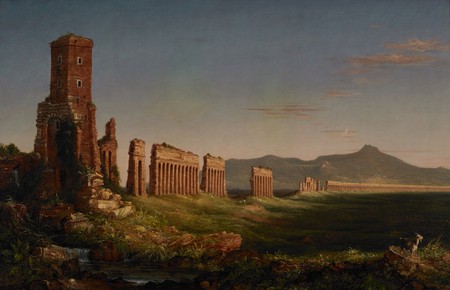 Cole’s return to the American East would also prompt the execution of his magnum opus: a series of five spectacular paintings that merged everything he learned during his time abroad. An allegorical masterpiece narrating the cyclical nature of human civilization, The Course of Empire (1833-1836) is one of Cole’s most arresting works, and the highlight of The Met’s comprehensive retrospective.

Classical architecture inhabits a North American landscape, detailing the rise and fall of society. The first light of dawn illuminates The Savage State.The sun rises in The Arcadian and Pastoral State, and radiates over a prospering society in The Consummation of Empire. The sun setsamid the burning fires of Destruction. Finally, in Desolation, the moon rises over the silent ruins of a once great capital. The landscape, identifiable through the ages by an enduring mountain in the background, takes over once more. “The Course of Empire is a moral fable in which ingenuity is undermined by a venal love of wealth and luxury,” explains the wall text. “Human progress is self-destructive, and the natural world prevails. Cole issued a clear warning to modern America.” 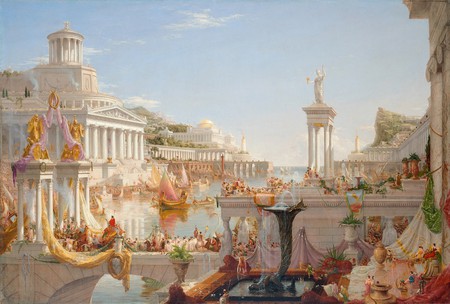 Thomas Cole. The Course of the Empire: The Consummation of Empire, 1835–36. | New-York Historical Society, Gift of The New-York Gallery of the Fine Arts (1858.3). Digital image created by Oppenheimer Editions 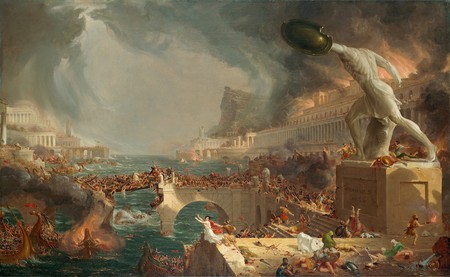 Cole’s body of work challenged the insatiable human pursuit of money and power, and the inevitability of breakneck modernization. And while he was, of course, unsuccessful in slowing the effects of industry through cautionary illustrations, the artist’s antiquated oeuvre is surprisingly relevant—if not prophetic—in the context of its present-day showcase. Thomas Cole bequeathed to the United States one of its most breathtaking and influential schools of art—and it was his global perspective as an immigrant that fueled it.