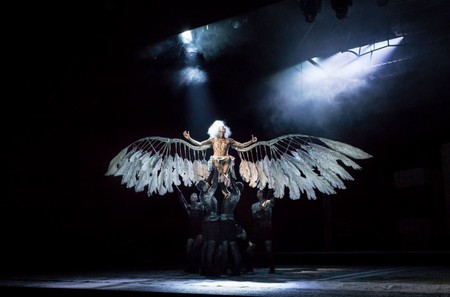 Now in revival, Tony Kushner’s shattering diptych proves as relevant as it was in 1991.

Angels in America is a confusing work in many ways. Ghosts haunt the living, characters encounter each other “on the threshold of revelation” in interwoven hallucinations, and couples form, separate, and change partners with a swiftness reminiscent of a Shakespearean comedy.

But the most intriguing part of Tony Kushner’s opus, revived on Broadway in a gripping production imported from London’s National Theatre, is how undeniably relevant it feels 27 years after it first opened. Directed by Marianne Elliott and playing at the Neil Simon Theater, the two plays—Millennium Approaches and Perestroika, performed in repertory by a stunning ensemble—pulse with an urgency that speaks to audiences in 2018 with startling clarity. 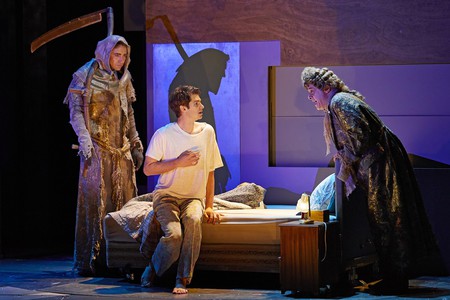 Set in New York City in 1985, Millennium Approaches follows the intersecting stories of the following characters: Prior Walter, a young man just diagnosed with AIDS; Louis, Prior’s lover, who struggles to support him; Joe Pitt, an upright Mormon attempting to deny his homosexuality; Harper, his agoraphobic, Valium-addicted wife; Roy Cohn, a controversial real-life figure who demands that his diagnosis of AIDS be recorded as “liver cancer”; and Belize, Prior’s former lover and a nurse at the hospital where Prior and Cohn are treated.

The world these people live in is verging on a cataclysm, or, as the ghost of the executed Soviet spy Ethel Rosenberg says, “History is about to crack wide open!” AIDS is ravaging the gay community. President Ronald Reagan is ignoring the pleas for help, and, as we learn when the second play begins, God has abandoned Heaven. 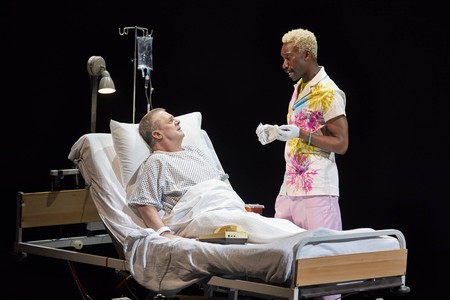 Unapologetically extravagant, Angels in America: A Gay Fantasia on National Themes—to give it its full title—encompasses historic events, political actions, and spiritual struggles, and it trades in grief and joy. The threat of death is present at every moment: HIV/AIDS has become a plague, and while Prior battles for his life, he attends funerals for friends who have died. The drug AZT is a new possibility but it’s available only to the rich and powerful.

Yet the decades of change (including medical improvements) do not make this production seem outdated. Once the outstanding cast invites the audience into Kushner’s complex milieu, it’s difficult to leave. Andrew Garfield’s Prior is a fusion of sarcasm, fear, and braggadocio. He is deeply moving during his moments of vulnerability, but he is at his best while posturing as a prophet dressed in sparkling black robes and enormous sunglasses and trembling with indignation and anxiety. 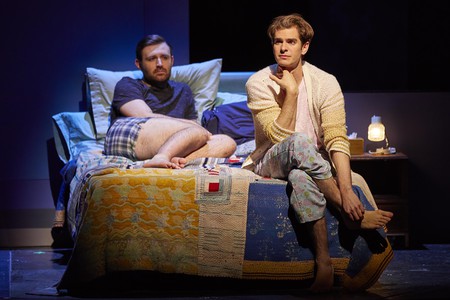 As Louis, James McArdle is compelling as he retreats from and eventually abandons his sick partner. His self-hatred is masked by frantic and often offensive political rhetoricizing. This is met with disgust by Belize, who is played with effortless grace by Nathan Stewart-Jarrett.

Louis’s guilt drives him into the arms of Joe, whose guilt-ridden acknowledgement of his sexuality is beautifully portrayed by Lee Pace in an enthralling performance. Denise Gough excels when evoking Harper’s Valium-fueled hallucinations and delivering her obsessive musings about the ozone layer. Susan Brown is doggedly determined as Harper’s pragmatic mother-in-law, Hannah, who lets go of her strict religious beliefs to help her son when her eyes are opened to what for her are unfamiliar New York lifestyles. 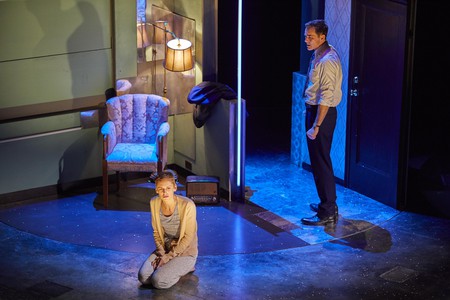 Pace’s mild temperament as Joe is a foil to Nathan Lane’s bombastic portrayal of Roy Cohn, who had the joint distinction of serving as Senator Joseph McCarthy‘s monstrous counsel during the second Red Scare and as Donald Trump’s mentor. Best known for his grandiose comedic performances, Lane unflinchingly delves into Roy’s tortured closeting of his sexuality as well as his desperate denial of the illness that will kill him.

The acclaimed actor gives a performance unlike anything he’s done on Broadway before. His theatricality is evident in every line of Cohn’s profanity-packed monologues, but he subtly inspires sympathy for the man clinging to his telephone—and his last shreds of power and control—until the last moment. His death, realistically enhanced by Rick Caroto’s makeup, is truly painful to witness.

Staged in various offices, apartments, and hospital rooms, Elliot’s production moves swiftly, with numerous moveable multicolored frames, designed by Ian MacNeil, serving as walls and barriers. Emphasizing how lonely the characters are, Paule Constable’s lights pick out and isolate them in the frequently dark scenes. 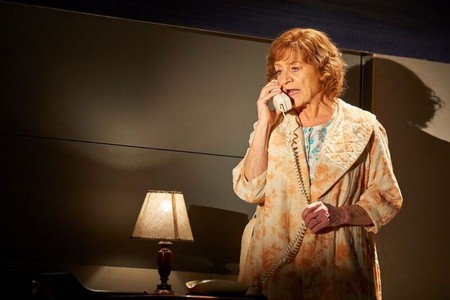 There are moments that could call for visual opulence, but Central Park’s Bethesda Fountain, which features in the climactic scene, is represented by just a few blue and purple neon lights. Played by Amanda Lawrence, the Angel (who tells Prior he’s a prophet) is a haggard creature dressed in a metallic corset with wings operated by a team of people credited as Shadows. (The costumes are by Nicky Gillibrand and the puppetry that assists Lawrence is by Finn Caldwell and Nick Barnes.)

Kushner asks a lot of his audience, and not just in terms of the plays’ combined length. Seeing them is an intellectual and emotional investment. Witnessing the overlap of time and space, the ghosts of historical figures returning to haunt those who wronged them, and the physical and mental deterioration of people we’ve grown to care about over the past several hours is an exhausting process. But it is also exhilarating.

Questions about faith and humanity will never cease, nor will the need for justice, respect and love. In a year charged with tension and fear, and with so many people facing threats to their well-being and their dignity, the idea of a world with no center resonates harrowingly. Kushner’s necessarily optimistic conclusion hangs in the air of the theater long after Angels in America has ended.