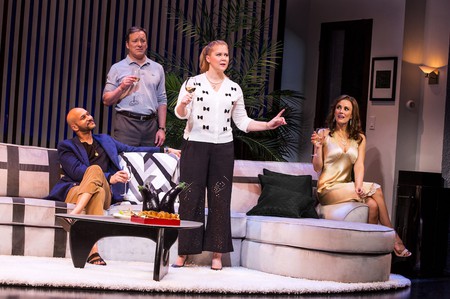 First written in the 1990s, Martin’s examination of marital bliss and stability has opened at the Booth Theatre, with Hollywood A-lister Amy Schumer making her Broadway debut. Despite its formidable ensemble, the Jerry Zaks-helmed play is disappointing, boasting too many witty one-liners and too little substance.

It opens in the living room of the appropriately named Corky and Norm, played by Schumer and Jeremy Shamos. Beowulf Boritt has rendered their home in tastefully muted shades of grey and white, symbolic of the couple’s pleasantness and blandness. Their costumes, designed by Ann Roth, echo the same quality.

Together for 19 years, Corky and Norm are comfortably secure in their marriage, which is founded on years of therapy, tapes, seminars, and rituals that involve holding hands while maintaining eye contact and repeating affirmations of their love for each other.

Much to their excitement, Corky and Norm are hosting another couple in their Ojai home. Gerald and Laura, played by Keegan-Michael Key and Laura Benanti, are visiting to watch the Perseid meteor showers. The sight of the two couples, which have access to Corky and Norm’s prominently displayed and well-stocked liquor cabinet, immediately inspires thoughts of Edward Albee’s boozed-soaked night of marital destruction, Who’s Afraid of Virginia Woolf? Martin’s play is much lighter and shorter—only 80 minutes—than Albee’s work, but it is not nearly as satisfying.

Destruction is what Gerald and Laura have in mind, as they state before entering Corky and Norm’s house, and the guests waste no time in needling, triggering, and intimidating Corky and Norm, disrupting every layer of their carefully cultivated life together.

Witnessing this attack is undeniably entertaining thanks to the ensemble’s considerable talents. But the nonlinear structure of Martin’s play, which jumps back and forth in time, is confusing and at times frustrating. The meteor shower, visually created by Natasha Katz’s lighting, punctuates a script that lacks sufficient purpose to invite investment in the characters and sufficient tension to make up for the lack of purpose. 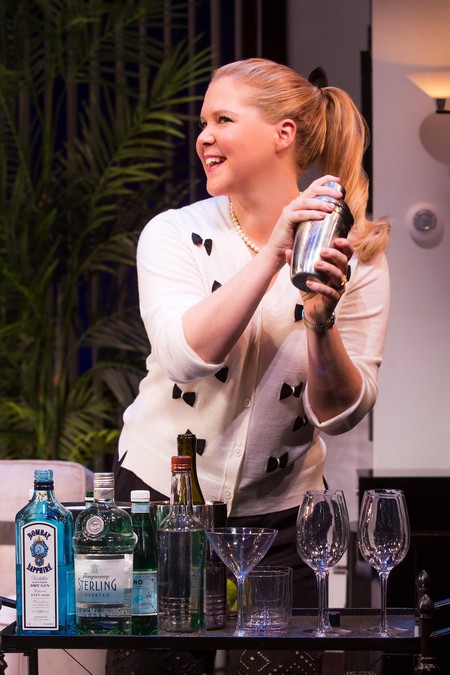 It plays instead as a series of jabs. The one-liners are funny, but the audience’s laughter lasts only as long as each zinger, as when Corky complements Laura’s dress and Laura replies, “I get so tired of looking awful! Don’t you?” In one of the better exchanges, Laura asks, “Aren’t you glad you’re not a man?” and Corky deadpans, “Oh, so relieved. I couldn’t stand all the advantages.”

Much has been made of Schumer’s casting, and the award-winning comedian makes an impressive stage debut in Meteor Shower. Excited but nervous to have guests in her home, the plain-spoken Corky is as perky and prepared as her tightly curled ponytail, which is adorned with a perfectly tied ribbon. Schumer often pokes fun at her appearance in her stand-up routines, and she brings the same self-deprecation to her scenes with the stunning Benanti; the humor in them feels organic rather than overused, however. The comedy is at its best when Corky and Norm turn the tables on their aggressively hostile guests.

As the soft-spoken and ambivalent Norm, Shamos gives a powerfully understated performance until the moment arrives when he and Corky go on the offensive to protect their marriage. Norm’s transformation into a stealthy predator who, nestled in a pation chair, smoothly insults and threatens Gerald’s masculinity is a delight to witness.

Benanti’s impeccable timing and languid sensuality land every joke solidly. Whether Laura is belittling Corky or attempting to seduce her, she is a force to be reckoned with. Only Key, who gives a boisterous performance as Gerald, feels out of synch with his co-stars. Pulsing with energy and shouting his lines, he comes across as more obnoxious than menacing.

One might observe—and it is later stated—that Gerald and Laura are not so much an external threat, but products of Corky and Norm’s subconsciousness: projections of the self-destructive instincts that threaten to unravel all the work they proudly reference when discussing the challenging aspects of marriage. A questionable metaphor about Velcro, for example, raises concerns about Corky and Norm’s dangerous co-dependency.

With its clunky final-scene revelation delivering little in the way of a payoff, Meteor Shower unfortunately resembles an extended Saturday Night Live skit rather than a complete play by one of the country’s foremost comedians. “If you don’t deal with your subconscious, it will deal with you,” Gerald warns Corky and Norm throughout the evening. Perhaps the same warning should be given to playwrights.