The Whitney Museum Of American Art: A Reflective NYC Institution 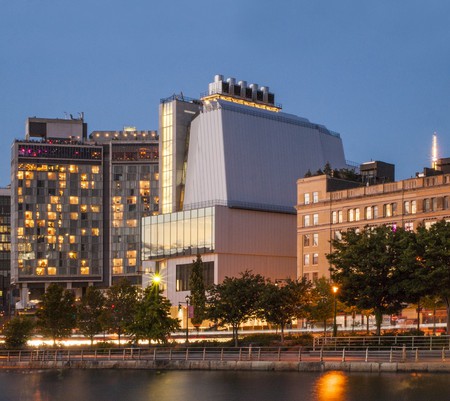 Forty years ago, downtown Manhattan was the home of Trisha Brown performances on fire escapes and Philip Glass concerts in loft apartments. Today, the area is marked by major galleries like Gagosian and David Zwirner, and now, the Whitney – a NYC institution. In May 2015, the Whitney Museum of American Art moved from its Upper East Side location to its new building in the Meatpacking District. Despite being the latest symbol of the area’s institutional takeover, the Whitney’s new home is a building designed by Renzo Piano, and pays considerable homage to the district’s character.

At first glance, Renzo Piano’s design might come off as an incoherent hodgepodge of architectural elements. Indeed, this has been one of the major criticisms against it, with New York Magazine’s review supposing that the building ‘might have arrived in an Ikea flat pack and then been prodigiously misassembled.’ But a closer analysis reveals the building to be a postmodern celebration of the area and its history.

Overlooking the Hudson River, the building’s west side juts awkwardly into the street and slopes back as it inclines. This is reminiscent of the hulls and masts of boats that used to line the Hudson’s coast, and this nautical appearance is aided by the boat-styled windows along its northwest façade. Countering this are references to the Chelsea Piers, former factories, and sanitation buildings along this part of the island’s coast, in the form of a commercial garage door and a block of exhaust grilles.

This factory aesthetic extends to the building’s north side, where large industrial windows span its top four floors, and a cluster of exposed pipes are seen climbing up to its roof. On the roof, Piano’s design highlights its cooling systems, shaped like the water towers of classic NYC apartment buildings. This loft-apartment building aesthetic is expanded on the building’s east side, where metal outdoor staircases provide a glossy likeness to the tenement fire escapes of those nearby structures. 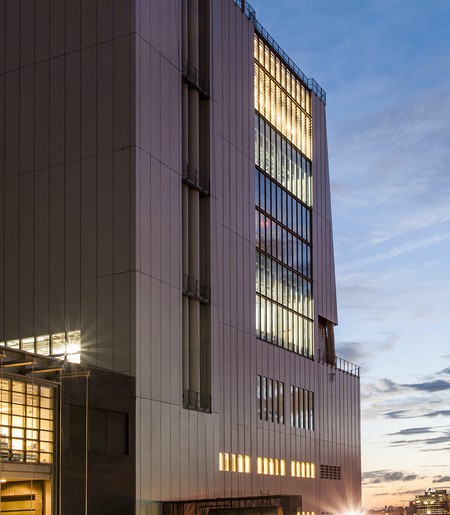 All of these nods to New York City’s multi-faceted history combine to create an edifice that eagerly reflects its environment. Though it may be a bit of a kockeputzi, it’s certainly an artful one, lovingly crafted to celebrate and, in a postmodern way, fit in with the surrounding area and its history.

‘Postmodern’ is a key word here, for this assemblage-like style is ripped straight from the book of pastiche. Think of the paradigm example of postmodern architecture, Johnson and Burgee’s AT&T Building (now the Sony Tower), and you will understand. There, a Renaissance arcade and an 18th century-style Chippendale pediment vertically bookend a modern-day skyscraper. An eclectic mix of forms come together to make a pan-historical architectural language. 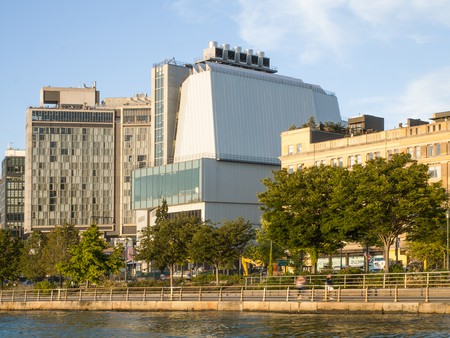 Piano’s museum, then, performs this pastiche not merely with historical forms, but with the neighborhood aesthetic. It is a piece of communal postmodern design, mimicking various elements of its surroundings in order to honor and take part in them. And ‘take part in’ is also key, as the building aims for communion not just with surrounding buildings, but with its people as well.

This is evinced by the enormous windows and stepped terraces designed to look out onto the High Line below and the skyline beyond. A sense of community between the interior museum space and exterior public space is established. People-watching is facilitated in either direction — from the High Line pedestrian to the museum patron, and back. And the museum-as-communal-center vibe is enhanced even further by the building’s dramatically cantilevered entrance, which opens up space on the sidewalk of Gansevoort Street, and creates a large plaza of museum-goers, restaurant customers, and High Line visitors.

In the words of the architect, the building is ‘a social place. You have a relationship not just with the art and the city but with other visitors too, like in those opera houses where you’re positioned to look at other audience members.’ Standing on its terrace, or sitting on its large sidewalk steps, an urbanite cannot help but agree. 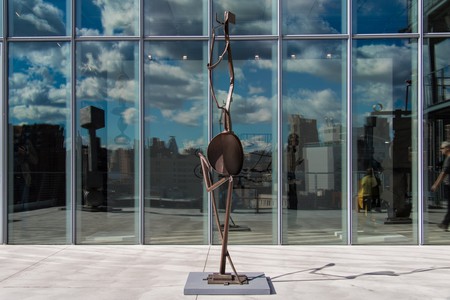 The Whitney continues to focus on 20th- and 21st-century American art, with a permanent collection of over 21,000 paintings, drawings, prints, photographs, sculptures, and films from more than 3,000 American artists. For more information about their collection and upcoming exhibitions, visit their website.