The Weird, Wild and Wonderful World of the House of Yes in Brooklyn

Tucked away in a warehouse in Brooklyn is the House of Yes – a performance-fueled nightclub and creative venue that showcases dance, circus, theater and cabaret shows.

In 2018, Time Out magazine compiled a list of the 50 best things to do in the world right now. Coming in at number two was the famous House of Yes nightclub. 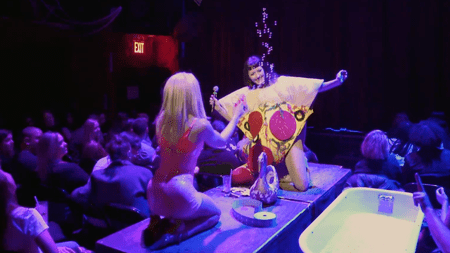 Anything goes at the House of Yes | | © Culture Trip

The magazine reported: “The name says it all: it is a place where anything goes, and it is keeping the city’s weird streak alive. On any given night, the house will be packed with body painters, aerialists, dancers and more – this is an eclectic hub where euphoric parties and taboo happenings are commonplace and the most liberated city dwellers feel right at home.”

History of House of Yes

The venue started operating as a club in 2015, but it started life as a run-down, hippie-punk squat house.

In 2007, Anya Sapozhnikova took the gamble to lease the building, knock down all the walls and turn it into a creative live workspace that would host occasional dance parties.

Disaster struck in 2008 when a fire burnt the entire warehouse to the ground. Devastated, Anya, accompanied by her best friend and then-housemate Kae Burke, looked for a different venue, and two months later, they signed a new lease on a former ice-house.

The House of Yes was reborn. Fashion shows, movie screenings, theater shows and circus spectacles were all hosted at the building until five years later, in 2013, when rent prices caused it to close once again. In 2015, it was reopened in a different location and rebranded as a nightclub of sorts.

According to the House of Yes’ website, the founders “have created this space as a temple of expression dedicated to connection, creativity and celebrating life.

The nightclub promotes four ideals. First is participation; the more you get in involved, the better your experience will be. Second is yes means yes; safe, consensual contact is all part of the party. Third is respect for the club and others around you. Fourth is being your best self in an environment free from judgment, fear, racism and sexism.