8 Amazing Things to Do and See in NYC's Chinatown 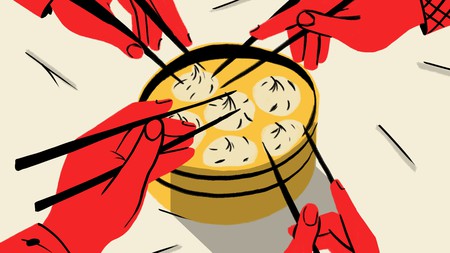 The streets of New York City’s Chinatown are teeming with bakeries, restaurants, boutiques, snack shops, herbal pharmacies, temples, and bars and nightclubs, which retain Shanghai flair, making visitors feel as if they have just stepped foot in a foreign land across the globe. For history enthusiasts, the gorgeous galleries, informative museums, and landmarks within the community capture the Chinese-American experience and tell the story of the immigrants’ history, growth, and successes within our nation.

Museum of Chinese in America 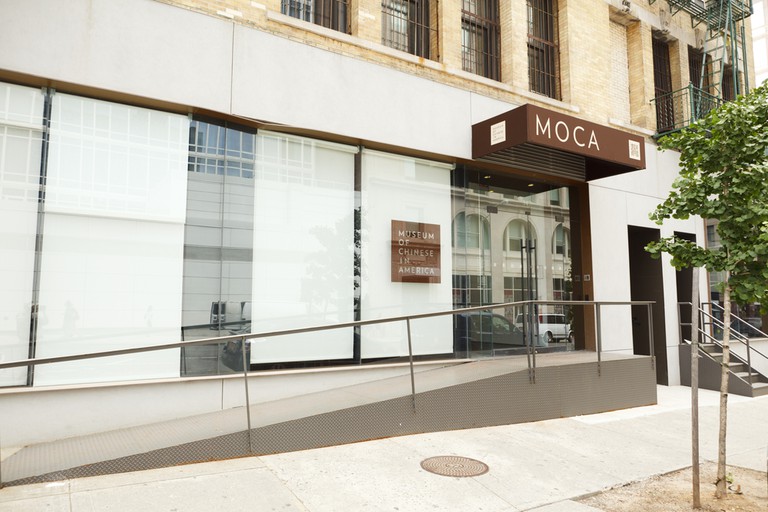 The Museum of Chinese in America on Centre Street in Lower Manhattan | © DW labs Incorporated / Shutterstock.com
The Museum of Chinese in America, founded in 1980, is devoted to preserving and presenting the history, heritage, and culture of Chinese immigrants in the United States. The museum has earned its place as being a national archive for the narratives of diverse Chinese-American communities. The permanent exhibition space is entirely dedicated to sharing the hardships that Chinese-Americans faced within our nation, beginning with the Chinese Exclusion Act of 1882, as well as demonstrating the growth and success that the Chinese population has contributed to our nation today. The range of exhibitions at the museum vary year-round and include floating projections, stunning photography, and interactive scenarios, which allow visitors to feel as if they are being questioned by immigration authority.
Open In Google Maps
215 Centre Street, Manhattan New York, New York, 10013, USA
+12126194785
Visit Website
Visit Facebook page
Give us feedback 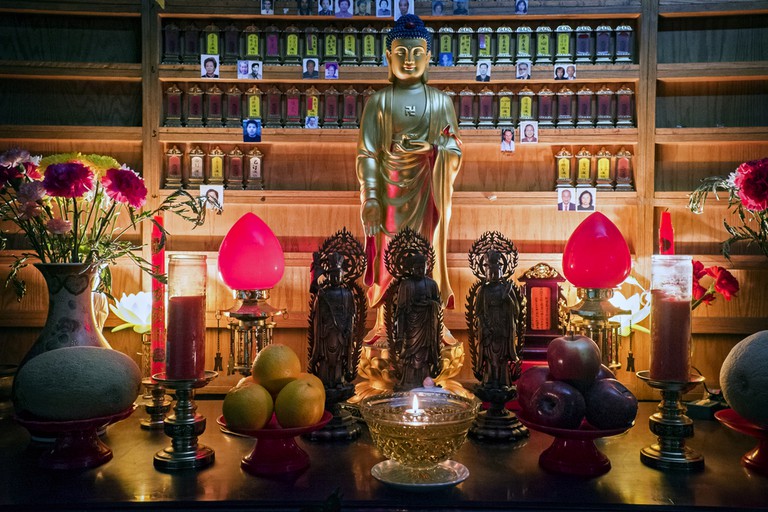 Buddhist altar in a Buddhist temple in Chinatown, New York City | © Keith Goldstein / Shutterstock
The towering, vibrantly colored Mahayana Buddhist Temple, lying near the iconic Manhattan Bridge, is New York City’s largest Buddhist temple. The interior of the holy institution, which is guarded by two majestic golden lions at the entrance, features a 16-foot tall statue of Buddha sitting atop a lotus flower, photos surrounding the walls portraying his various pivotal life events, and a large urn with aromatic incenses floating throughout the room. A special area with tables is also available for families and friends of deceased relatives to offer their prayers and sentiments. The temple provides a number of other services such as formal ceremonies on the weekends and fortune-telling, which is available for a low price.
Open In Google Maps
133 Canal Street, Manhattan New York, New York, 10002, USA
+12129258787
Visit Website
Visit Facebook page
Give us feedback

Shop, Store
Facebook
Email
Twitter
Pinterest
Copy link
Share
Map View
Aji Ichiban, an Eastern-influenced confectionery shop originating in Hong Kong, functions as an Asian snack paradise for New Yorkers wishing to satisfy their sweet tooth with foreign treats. The shop sells a large assortment of dried goods, including fruits, nuts, ginger, and jerky, as well as wasabi peas, Japanese rice crackers, shredded squid, and cuttlefish. More exotic, hard-to-find savory treats include lychee milk hard candies, sweet pickled plum, flan-filled marshmallow, haw-flavored candy, loquat candy, and kumquat pellets as well as nostalgic Western candies such as Pop Rocks. Fortunately for customers, Aji Ichiban is very liberal with in-store munching and sampling and lays out bowls of snacks throughout the store, so visitors leave with their absolute favorite treats of the stock. Also, products are sold individually instead of in packages, which allow visitors to mix and combine a large variety of their favorite snacks rather than having to choose one out of many.
Open In Google Maps
37 Mott Street, Manhattan New York, New York, 10013, USA
Give us feedback

New York City is a haven for fashion lovers and style enthusiasts, offering a seemingly endless selection of chic boutiques and trendy clothing steals. However, for those who think they have seen it all, Chinatown’s Canal Street offers an exciting new shopping experience, with its open-air-bazaar feel, vendors willing to bargain and haggle, and an impossibly wide assortment of goods for sale. This overwhelmingly long strip of stalls and shops is known for its gray-market vendors selling knockoff designer purses (they have it all: Louis Vuitton, Prada, Coach, Gucci, Chanel, Michael Kors, and more!) alongside bootleg DVDs and unique jewelry pieces at ridiculously low prices. New Kam Man, a two-level marketplace located on the strip, sells knick-knacks, kitchenware, beauty products, home décor, cheap New York City souvenirs, specially displayed for tourist eyes, and cuisine from around the globe. 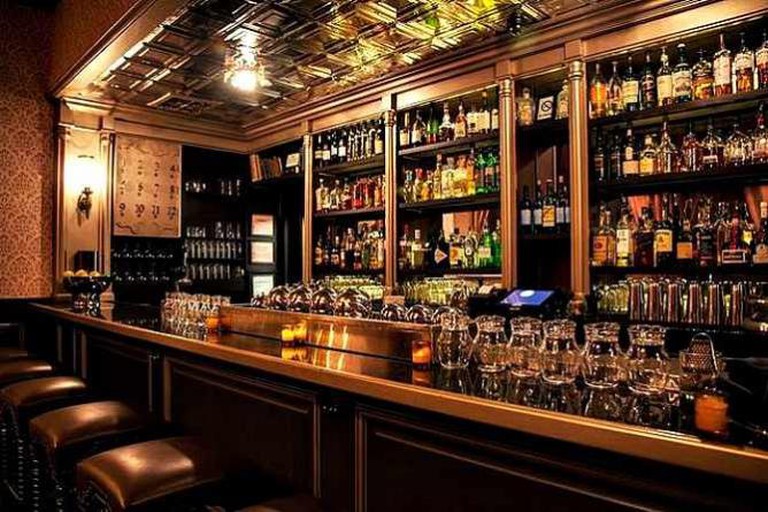 Apotheke, Doyers Street | Courtesy of Raines Law Room
Inspired by the history and art of the apothecary tradition, which originated in Europe, Apothéke is far from your average New York City bar experience. The bar resembles a theatrical chemistry lab, with old vials dotted around the interior, and over 250 cocktails, which are referred to as ‘prescriptions’ and are separated into categories such as health and beauty, painkillers, stimulants, and aphrodisiacs. Bartenders who are dressed as the role of mad scientists in white lab coats mix margaritas rimmed with Himalayan salt and ignite flames onto Apothéke’s signature drink, the pyromaniacal absinthe. The interior space, made from imported Carrara marble, features a hand-carved back bar, as well as medicinal jars and bottles collected from foreign lands.
Open In Google Maps
9 Doyers Street, Manhattan New York, New York, 10013, USA
+12124060400
Visit Website
Give us feedback 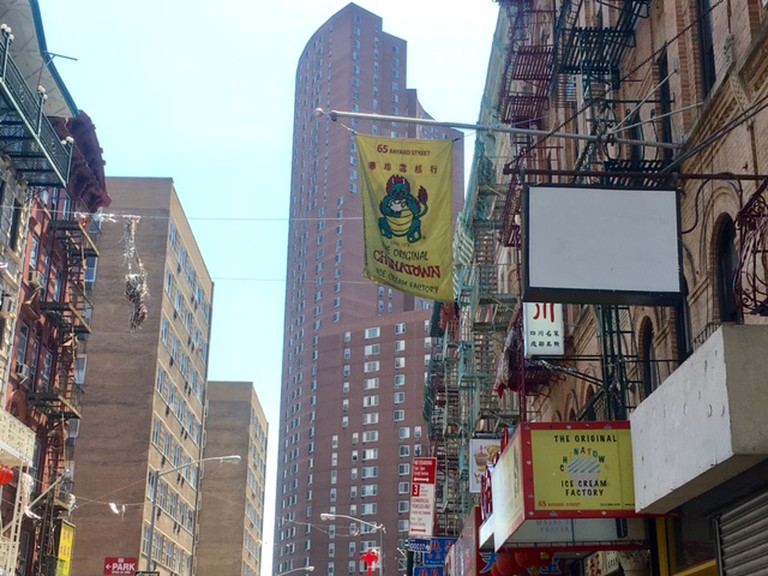 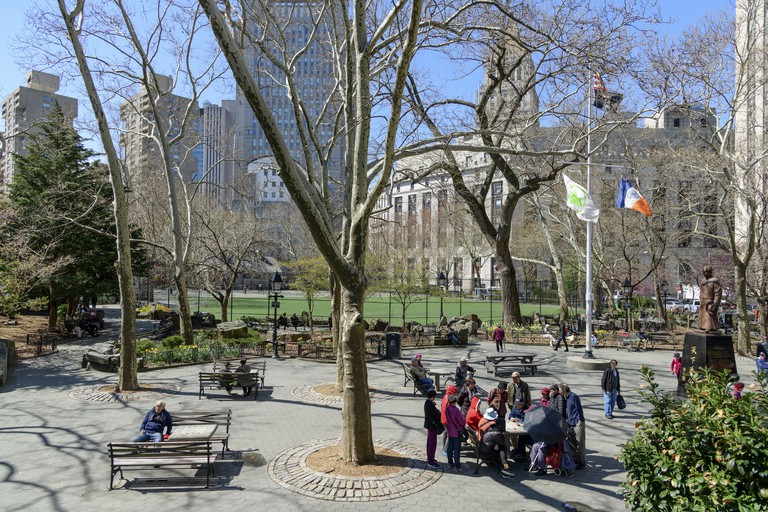 Columbus Park in Chinatown, New York, USA. | © Ganesha / Alamy Stock Photo
This historically significant park located in the heart of Chinatown is the ideal demonstration of the neighborhood’s rich diversity and mingling of residents from all different backgrounds and walks of life. The north side of Columbus Park is reserved for Asian card players and masters of mah-jongg, while amateur troupes of Chinese-opera performers are found throughout the park, and tai chi and kung fu practitioners strike a few moves on the grassy lawns. The park’s three-acre sports facility includes an Astroturf field for soccer, volleyball, and impromptu baseball, as well as a basketball court and a well-equipped playground with sprinklers and a wading pool to occupy the children while the parents relax and lounge about.
Open In Google Maps
Baxter Street, Manhattan New York, New York, 10013, USA
+12126399675
Visit Website
Give us feedback

Bakery, Chinese
Facebook
Email
Twitter
Pinterest
Copy link
Share
Map View
This neighborhood favorite has been serving Chinese delicacies since 1968, and it is famous for its unbeatable roast pork buns, which will have customers lining up at all hours of the day. Mei Li Wah Bakery’s tasty variety of buns, pastries, and sweets has earned the bakery a star reputation over the years. Neighborhood locals sit cozily in the small booths and counter stools, munching on egg-yolk buns, baked yam with cheese, tofu pudding, salty pancakes, congee with shredded calamari, cocktail buns, beef rice noodle rolls, and stuffed fried fritters, all while slurping up wonton noodle soups or taro tea with sago.
Open In Google Maps
64 Bayard Street, Manhattan New York, New York, 10013, USA
+12129667866
Visit Facebook page
Give us feedback
Give us feedback