The Times They Are A-Changin’: Can the Bohemian Spirit of Greenwich Village Be Saved?

On a sunny autumn afternoon, Washington Square Park attracts a typical array of performers; acrobats do flips and tricks, lone troubadours strum at guitars and a few middle-aged men limber up for their weekly alfresco yoga class. Among them wanders the never-ending flow of tourists clutching their guidebooks and dragging their selfie sticks, many in search of one thing: That magical, illusive land of Old Greenwich Village.

Nestled between the Hudson River and Broadway, Greenwich Village stretches roughly 14 blocks across and 12 blocks down. Although far from New York’s largest neighborhood, it is undoubtedly one of the richest in history and culture. Packed into this small patch of land is a musical past unrivaled across the city, a past that acts as both a blessing and a curse. The stories of Bob Dylan, Jimi Hendrix and Miles Davis give the Village its enviable artistic flair, but they also attract thousands of new residents every year who bump up rent and disrupt the native rhythm of life. Now one of the most desirable pieces of real estate in New York City, Greenwich Village appears to have grown away from its roots, gaining a reputation for overpriced stores and middle-class inhabitants. In the midst of this bourgeois invasion, is it possible that an authentic music scene still survives? 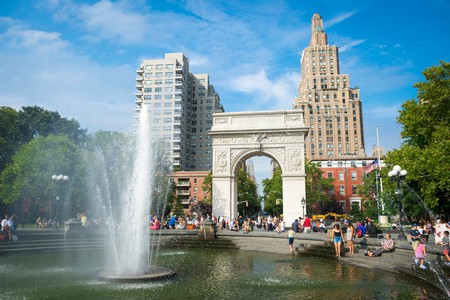 “Greenwich Village was a place where people were not driven by money,” says Steven Watson, a cultural historian. Watson’s books The Birth of the Beat Generation and Strange Bedfellows explore, in part, the Village of the early 1900s, explaining how and why it became home to a bohemian way of life that lasted for almost a century. While industrialization swept across the rest of New York City, the crooked streets and newly immigrated inhabitants of the Village left it relatively unchanged, and creativity thrived as a result. Back then, a room on the south side of Washington Square Park rented for $8 a month, and lunch at the neighborhood’s most popular café, Polly’s, was less than 50 cents. Throughout most of the twentieth century (until roughly the mid-eighties), rent and food prices remained relatively cheap, attracting artists to live and work.

But now, Greenwich Village is consistently ranked among the most expensive neighborhoods in the whole of New York City, often beating out high-end areas such as Gramercy Park and the Upper West Side. Ironically, it seems the gritty, bohemian style of the Village is something that people are willing to pay big bucks for. In October 2017, property company Zumper reported that the average monthly rent for a one-bedroom apartment in Greenwich Village was $3,800 (£2,690)—the kind of money most artists, and most previous inhabitants, could only dream of.

“It’s just ridiculous,” says Samantha Hall, publicity representative for Westbeth Artists Housing. Westbeth, a converted laboratory on Bethune Street in the West Village, was built on a fundamental ideal: Keep art alive. The idea was conceived in the 1960s by theatre producer Roger Stevens and New York philanthropist Joan Davidson “to help relieve the terrible struggle most artists face[d] to survive in New York City.” Westbeth was the first of its kind in the US, offering subsidized housing for artists who were being priced out of their homes and work spaces. And where better to implement this radical concept than Greenwich Village? 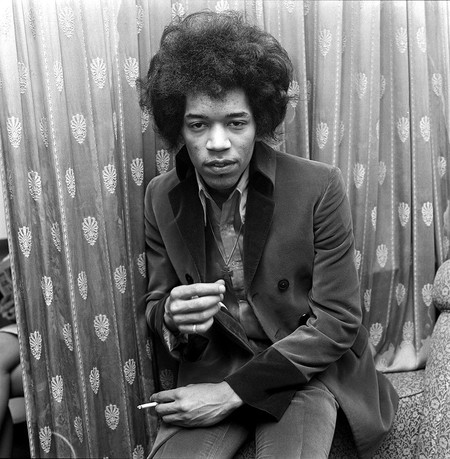 Now part of the National Register of Historic Places, Westbeth remains a space where all range of artists can work and live, paying rents within their means. “We’re the only poor people left in Greenwich Village,” says Hall, a museum curator who lives in the artists’ community with her husband, a painter. Their rent is fixed at $1,500 a month, something Hall says is “unheard of” in the Village. She points out that the original concept was for artists to live in Westbeth only temporarily. “But that never happened. Once you’re in, you’re in. The only way you’re leaving is if you die or get wheeled off to Bellevue,” she says.

Li’nard Jackson, a jazz and funk musician, moved out of the Village in the mid-nineties, a time of great change for the neighborhood. “The Village had a sense of peacefulness before then,” he says, “it wasn’t as commercialized as it’s starting to become. There were more places like this.” We are sitting at MacDougal Street’s Café Reggio, in central Greenwich Village. A couple of their famous cappuccinos sit on the marble tabletops in front of us. (Legend has it that the café’s original owner, Domenico Parisi, was the first to bring a cappuccino from Italy to America in 1927.) The small café is dimly lit, with calm, classical music oozing from the sound system. 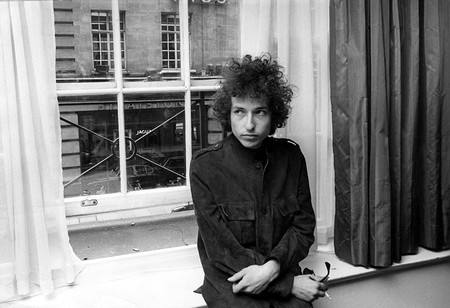 “This block in particular was very important for musicians,” says Jackson, explaining that MacDougal Street was once the beating heart of Greenwich Village. Right across from Café Reggio was Izzy Young’s Folklore Center. During the Bob Dylan days, dozens of musicians piled daily into Young’s store to buy instruments and records, or simply hang out and chat with the illustrious owner. Visit 110 Macdougal today, however, and you’ll only be in for a manicure or bikini wax at an upmarket salon. Walk a little further down the street, and there is no sign of the legendary Gaslight Café at 116 MacDougal. Once a musical nexus for renowned folk artists such as Tom Paxton and Phil Ochs, 116 is now the sleek and trendy Up & Up Bar, where you won’t find a cocktail for less than $14. All across Greenwich Village, vestiges of its mesmerizing past have disappeared.

“One of the major clubs was CBGBs on West 3rd and Bleecker Street. Then they started this whole ‘renovation’ of the area,” Jackson says. “It happened from the West Village to the far east side. You started to see places, historical places, like CBGBs, close. They started making condominiums and there was this weird influx of drug stores. Drug stores, everywhere! One of the most famous jazz clubs was The Village Gate, and now it’s a storeroom for CVS.” 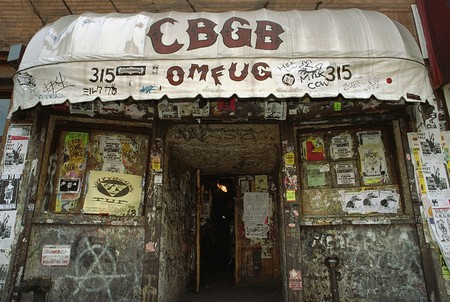 Mandatory Credit: Photo by Jim Cooper/AP/REX/Shutterstock (6543493a) An exterior of the rock club CBGB at 315 Bowery in New York City taken on CBGB'S, NEW YORK, USA

Natalie Gelman, a musician born and raised in the West Village, has also seen the landscape of her childhood change. Now living and performing in Ojai, California, she notices something different each time she visits home. “There are four or five Marc Jacobs stores within a two-block radius,” she says “I mean, who can afford that much Marc Jacobs?” She remembers the days when her walk to school meant passing by a building on the corner of 14th and 9th where prostitutes hung out of the window to smoke cigarettes or hail passing trade. “It seems crazy now,” she says, laughing.

Gelman also found that a change in landscape bought a change in lifestyle. “Some of my friends are willing to pay $10 for a coconut milk at some new organic café, but whenever I’m back, I just can’t bring myself to do it,” she says. As a child, Gelman was used to bargain hunting with her mother in the local grocery stores and bookshops, so she and her family have found it hard to adapt to the new routine. Her godmother, a Village native, once called her to complain about the new prices: “She said, ‘Natalie, you know I am willing to spend good money on food,’” Gelman recalls. “‘But it is just getting out of hand. I went into the store to buy a cucumber and it was $5! I said to them, if you expect me to pay $5 for a cucumber, it better vibrate!’”

Gelman’s family has called the Village home for many decades. Her grandparents owned a bakery on 12th Street, just down the road from where she grew up with her artist parents. After acquiring a fake ID at the age of 13, Gelman made the rounds at famous haunts such as The Bitter End, one of the few remaining relics of ’60s life. Every time she visits Greenwich Village, however, she sees less and less of what once made it so special—the sense of community. “The Village lifestyle seems so transient now,” she says. “People come for three or four years just to get what they want out of it and leave. No one puts roots down there anymore.” Gelman misses the time when neighbors helped neighbors and when she had the support of her musical compatriots. “You felt like you could take on New York because you had the Village behind you,” she says. “But it’s not like that now.” 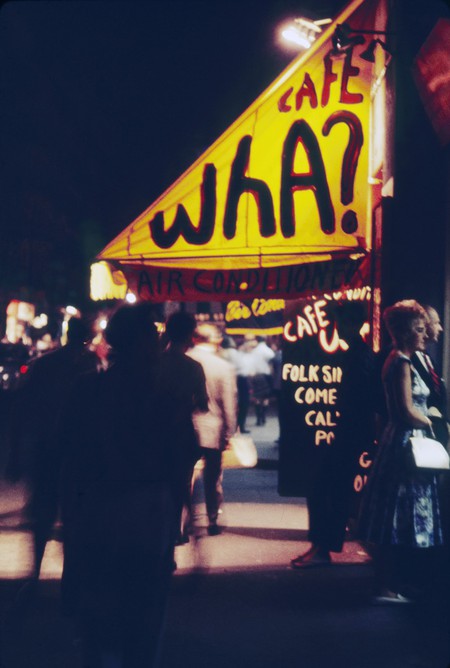 Search hard enough and you will find some remnants of the Village’s musical heyday. Café Wha at 115 MacDougal, where Bob Dylan performed his first New York gig and Jimi Hendrix perfected his picking, is still a Village staple. The club prides itself on its beatnik roots and hosts regular music nights to showcase new musicians. On any given weekend, The Blue Note on West 3rd will have lines stretching down the street, with jazz fans delighted to see a stage where the likes of Dizzy Gillespsie once played. Just up the road, funk club Groove hosts live music seven nights a week, providing a platform for old hats and fresh young talent alike. Outside Groove, a mural by local artist Rico Fonseca covers the wall. Fonseca depicts famous musicians both native and non-native to the Village. Hendrix sits aside John Lennon, for example, and Elvis Presley next to Miles Davis. Timeless lyrics from The Youngbloods are scrawled small in the corner: “Come on people, now. Smile on your brother. Everybody get together. Try to love one another. Right now, stop the hate.” A charming, albeit rather small, souvenir from the Village of the ’60s.

Wait in Washington Square Park long enough, and you are sure to be asked directions. “We’re looking for Old Greenwich Village,” they’ll say, eyes tracing the phrase in their guidebook. Try to let them down gently. They’re about 30 years too late.