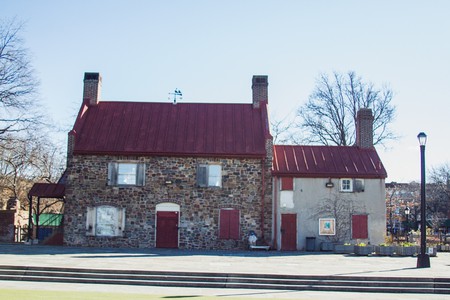 The Old Stone House viewed from the sports field on its west side in Park Slope, Brooklyn | Rachel Thalia Fisher / © Culture Trip

Park Slope, Brooklyn’s most tranquil residential neighborhood, witnessed some of the bloodiest fighting of the Revolutionary War. Today, you can still explore where the major battlefield moments occurred, including the old stone farmhouse – later the home of the future Brooklyn Dodgers – where the Battle of Brooklyn came to a head.

As the British army and its German Hessian mercenaries pressed for victory against George Washington’s Continental Army during the Battle of Brooklyn on August 27, 1776, American soldiers of the 1st Maryland Regiment made a heroic last stand in front of a Dutch Colonial farmhouse that stood in modern-day Park Slope. The Marylanders’ rearguard action cost 256 of them their lives, but it enabled Washington and most of his citizen soldiers to escape to Manhattan, which had a profound bearing on the Revolutionary War’s outcome.

The original two-story farmhouse, an oblong structure with fancy gable ends and high chimney stacks, was built in 1699 by Dutch immigrant farmer Claes Vechte or his son Hendrick. At the time of the battle, the house was occupied by Hendrick’s son Nicholas and his second wife, Abigail. 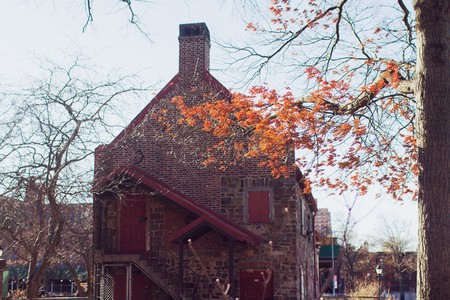 Remnants of it survive in the Old Stone House, the replica built between 1930 and 1933 owing largely to community leader Charles M Higgins (1854-1929), who had championed the memorializing of the neighborhood in the Battle of Brooklyn. A museum and educational center since 1995, the house sits between an artificially turfed sports field and a playground in Washington Park (between Fourth and Fifth avenues and Third and Fourth streets). Children’s swings in the park’s southeast corner denote where the house stood originally – it’s hard to imagine the carnage that occurred there.

Among the attractions in the recently refurbished museum are dioramas and an interactive map showing the progress of the battle. Paintings depict the once bucolic landscape – home to 200 farming families – that suddenly resounded with the crack of muskets and the roar of cannons. 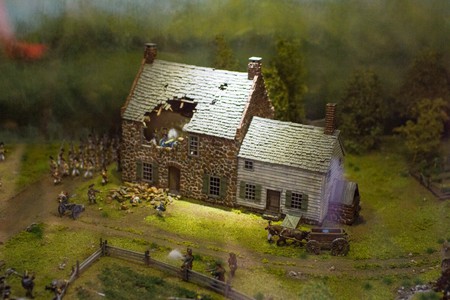 By 1861, the original house was being “used as a clubhouse for the Washington Skate Club [which had] the first private rink in the city,” notes Nora Curry at the New York Streets website. In the 1880s, the building became the clubhouse of the Brooklyn Baseball Club, later the Brooklyn Dodgers. What was left of the building after a military Gatling-gun demonstration was demolished around 1897. As part of the 1930s reconstruction of the house slightly to the northwest of its original position, it was made to face Fifth Avenue; the Vechte-Cortelyou House or the Stone House of Gowanus, as it had variously been known, had faced south.

The Revolutionary War’s first phase ended with the Patriots’ siege of Boston (April 19, 1775, to March 17, 1776), which forced the 10,000 occupying British troops to evacuate and escape by sea to Nova Scotia. Washington knew the enemy would next try to seize Manhattan and its harbor, a potentially vital link to British troops in Canada, a port for supplies shipped from England and a hub of trade routes. Controlling the harbor would enable the British to strangle New York’s economy and split the northern and southern colonies. Ahead of the British advance, Washington moved the majority of his forces to Manhattan to defend the island. He maintained a bulwark in modern-day Brooklyn Heights and redoubts from Wallabout Bay (near the Brooklyn Navy Yard) to Gowanus Creek. 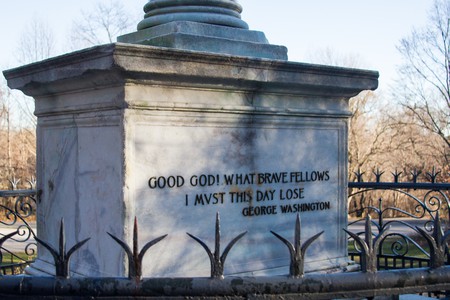 On August 26, 17,000 British soldiers under General William Howe and 6,000 Hessians and Highlanders advanced from Fort Hamilton and Dyker Heights in southwest Brooklyn. Howe’s goal was to crush the entrenched 11,000 Americans under General Israel Putnam. Around 8am on the 27th, a boat brought Washington, Putnam’s commander-in-chief, from Manhattan to Brooklyn Heights. The Americans had slim hopes of victory, and Washington would watch his army’s defeat either from the high ground of Fort Cobble Hill near Atlantic Avenue and Court Street (where Trader Joe’s now stands) or from Fort Box on Bergen Hill, at Pacific Street and Bond Street in modern Boerum Hill.

The British attack was three-pronged. On its right, the main force under General Cornwallis made a night march through the Jamaica Pass (in modern-day East New York) and captured Bedford Village (now part of Bedford-Stuyvesant). It then marched west along Jamaica Road, which roughly parallels today’s Atlantic Avenue, writes John J Gallagher in The Battle of Brooklyn, 1776 (1995). Where Jamaica Road joined Flatbush and Gowanus roads, Cornwallis’s men turned south (between modern-day Fourth and Fifth avenues) and seized the stone house.

A tree falls in Brooklyn

This successful flanking movement was aided by two diversionary attacks. Near Gowanus Bay, the British left-wing force of 5,000 was opposed by 1,600 Americans under General Stirling along a defensive line reaching from present-day 23rd Street to Green-Wood Cemetery. The markers on Battle Hill in the cemetery show how the battle evolved. After holding off the British for six hours, Stirling’s dwindling command was driven back to the stone house. He ordered most of his men to flee across Gowanus Creek and the surrounding marshland to safety in Brooklyn Heights; some drowned in the creek.

Hessians and Highlanders in the British center meanwhile attacked Flatbush Road. At Flatbush Pass – now commemorated as Battle Pass by a plaque on a boulder on Prospect Park’s East Drive – American soldiers felled the huge white Dongan Oak, a local landmark. They laid it across the road to impede the enemy’s advance, but in vain. The Americans were overcome by Hessians attacking from the front and by the British from the rear. The American General John Sullivan fought bravely with a pistol in each hand but was captured. The Hessians bayoneted to death hundreds of Americans in the woods and headed down the Port Road (across modern-day Prospect Park and Garfield Place), converging with the British left and right wings to attack the stone house. (A memorial to the Dongan Oak stands on the East Drive near Prospect Park Zoo.)

Built to withstand Indian attacks, the stone house was a robust fortification. When Cornwallis captured it, he placed a lightweight cannon inside to shell Americans escaping across Gowanus Creek; British marksmen fired on them from the windows.

Faced by Howe’s formidable reunited army, Stirling and Major Mordecai Gist led the 1st Maryland regiment – the so-called “Maryland 400” – in their last-gasp attacks. “Six times Stirling charged, and twice the assaults drove the British from the stone house,” writes Gallagher. But the Americans were soon overwhelmed, and Stirling surrendered.

Prospect Park’s Maryland Monument – a Corinthian column crowned by a marble orb – commemorates the “400.” Designed by the architect Stanford White, it stands at the base of Lookout Hill on Wellhouse Drive, south of the Long Meadow. The inscription on the pedestal cites words reportedly spoken by Washington watching the demise of the Maryland 400: “Good God! What brave fellows I must this day lose.” 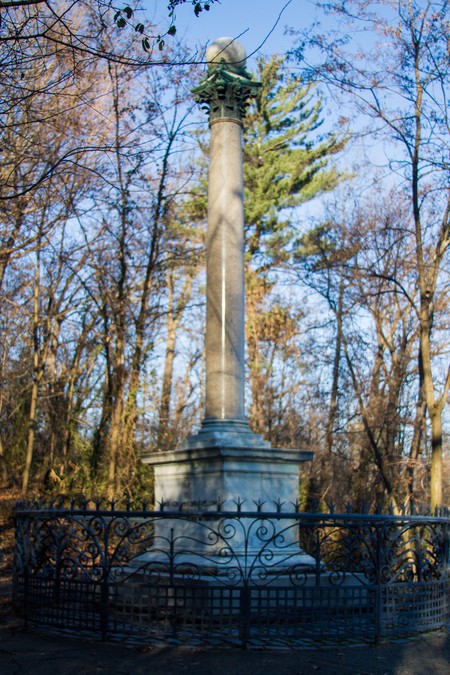 The battle’s casualties have often been exaggerated over the years. Barnet Schecter’s assessment in The Battle for New York (2002) is comparatively modest: “Howe reported only 61 killed, 267 wounded, and 31 taken prisoner or missing.” Hessian losses were two killed and 26 wounded. “Washington put his losses at ‘seven hundred to a thousand killed and taken,’ and later settled on the figures of 800 casualties, ‘more than three fourths of which were taken prisoners,” Schecter adds.

The British had vanquished the Continental Army in the first battle since the signing of the Declaration of Independence. Fearing further British casualties, however, Howe decided not to attack the 9,500 American soldiers he believed trapped in Brooklyn Heights. On the night of August 29, the Americans were ferried across the East River to Manhattan without a single casualty, Washington taking the last boat before 7am. He and his soldier-citizens lived to fight another day – thanks to the selfless courage of the Patriots who fell before the stone house.

The Old Stone House is open Friday 3pm to 6pm, Saturday and Sunday 11am to 4pm, or by appointment. The address is 336 Third Street, Brooklyn, NY 11215. info@theoldstonehouse.org.