The Power of Neon: Merging Streetscapes with Taiwanese Cuisine at 886 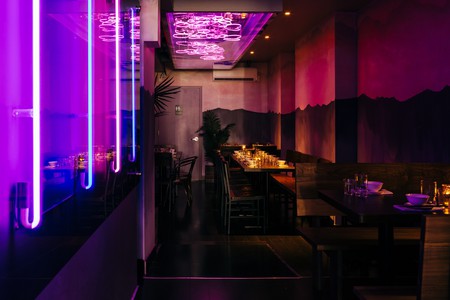 St. Marks Place has seen its fair share of changes over the years. What was once a grungy, punk-rock scene has evolved to cater to a predominately NYU student and tourist crowd – a quasi-cleaned-up iteration of its former self. But between the new vending machine ‘restaurants’ and overly polished, pink dessert shops are piercing parlors and grungy magazine stands, as well as neighborhood staples like Mamoun’s and Kenka; St. Marks is an ever-evolving, vibrating organism that refuses to bow down to big-box business and go quietly into the night.

New restaurant 886 emulates that St. Marks quality – resistant yet rebellious, hard-edged experimentation – perfectly, and has slipped in among its new neighbors with ease. The 42-seat Taiwanese eatery, with its moody lighting and narrow walkway, has managed to maintain the essence of St. Marks, while still introducing something new to the neighborhood. Although noisy and slightly cramped, the team at 886 don’t allow their tight quarters to interfere with the restaurant’s ambience. For designer Scott Kester, achieving that confluence of worlds on the aesthetic level came down to two things: infinity mirrors and neon lighting. 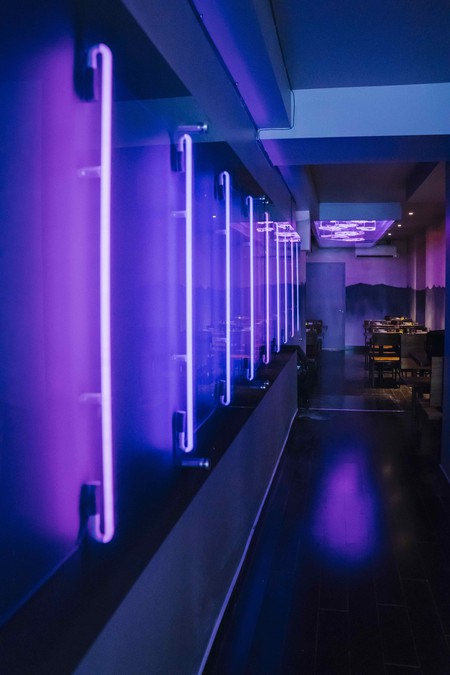 Inspired by streetscapes in Taipei, Singapore, Hong Kong and, of course, the East Village, Kester opted for a dimly lit purple design. A row of square, neon infinity mirrors line the ceiling, creating a convincing sense of expansion within the narrow corridor, while the walls radiate a purple and blue hue that further lends to the moody vibe.

Kester’s reason for the mirrors? “To freak everyone out,” he says.

But really, the use of mirrors and neon lights is a strategic, scrappy way of designing for a small space. “There’s smoked glass on top of [neon lights], so everything doubles in size when you get the reflection,” he says. “Plus the neon adds a nice glow to the interior space. It’s really beautiful light on your skin, on the food.” 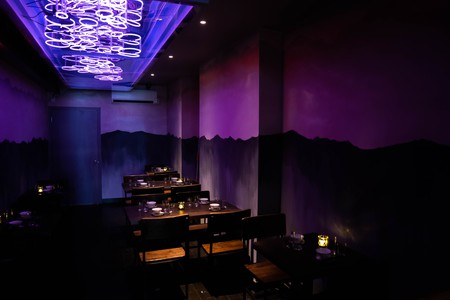 The back lighting installation was inspired by Taiwan's national flower, the Plum Blossom | © Ben Hon

Known for his previous work at Sushi on Jones and The Pavilion in Union Square, Kester’s standout signature design would have to be his ceiling work. For 886, he swapped the triangular, wooden ceiling forms for glass and illusion – because how else can you create more space when there’s none to be had?

When working with restaurants, designers will often forget about the ceiling, and Kester sees this as a mistake: “You look at most restaurants and you want to get as much storefront as possible, so you can see in and see out, so not much is done with the facade and ceilings. They’re kind of ignored… and that’s a missed opportunity because that’s a big experience of the space.” 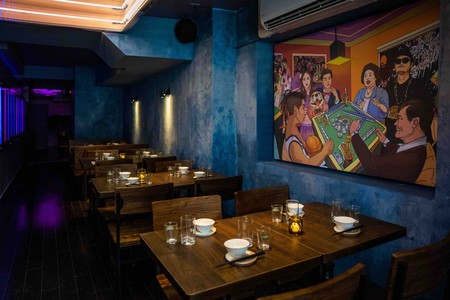 Rather than sterilize 886 against St. Mark’s chaos and transform the place into yet another cookie-cutter, posh scene, Kester wanted to channel the famed street’s vibrancy. “I grew up in the ’70s, when it was the beginning of headshops,” he explains. “Big fluorescent dayglo posters everywhere, heavy metal. It wasn’t my musical taste, but the places [were mainly] dark dens. Now, if you go around the corner, there’s all these white coffee shops, and the [design] is clean and Instagram-friendly. I thought, ‘Yeah, we’re not doing that.’”

Sure, there are Instagrammable ‘moments’ within the design, including the bathroom, but the symmetrical, clean lines associated with the ’gram didn’t impact the aesthetic too much at 886.

“It’s a bit crazy on St. Marks,” Kester says. “We wanted to bring that feeling into the shop.”

For a list of some of the most Instagram-worthy restaurants in New York City, check out this article.