The New Trends At Fashion Week Are Happening Off The Catwalk 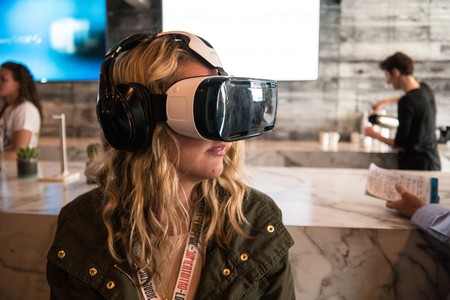 A Samsung VR Headset, similar to the new range introduced at NYFW

Fashion month begins, and with it the traditional flurry of sartorial fanfare. Yet this season clothes are taking a backseat, with attendees at NYFW instead focusing on new technologies being trialled by designers. Culture Trip explores the fashion trends poised to shake up the industry.

Introducing the Next Frontier: Virtual Reality

California-based virtual reality company Voke have partnered with NYFW’s tech sponsor, Intel, to take audience participation to new levels. “We are focused on changing the way people experience and engage with live events by giving viewers control over where they sit, what they see and when they see it,” Voke co-founder and CEO Sankar Jayaram said in a statement. For fashion week, this means giving global audiences a front row seat to the catwalk, with a view that can be enjoyed from the comfort of their own homes. Adventurous designers embracing new virtual reality technology include Prabal Gurung, Misha Collection, Supima and Band of Outsiders. Designer Rebecca Minkoff has pushed boundaries one step further, introducing virtual reality headsets into her product line. Should this initial introduction prove to be successful, brands will be able to vastly expand their audience reach for the shows, increasing revenue streams and saving on production costs. Fashion’s exclusive edge will transition into a more rounded, inclusive community.

Social media has already enabled instant catwalk access. Non-industry figures can now participate in the performance, forming their own opinions based on the same–albeit slightly blurrier–scenes that editors on the front row are witnessing. The success of these platforms has informed new strategies by major houses. Burberry, who allocates over 60% of their marketing budget to digital, was one of the first houses to embrace live streaming for their shows, making use of Snapchat to promote catwalks to readers worldwide. Last September, designer Misha Nonoo made waves when she launched her presentation exclusively over Refinery 29’s Snapchat account. However the reliance of designers on social media doesn’t always have the desired consequences. At Kanye West’s Yeezy Season 4 presentation, models stood for hours in blistering heat. Some fainted, others had to sit down and audience members found themselves coming to their aid as the Yeezy team reportedly sat by and did nothing. The calamity-filled presentation engendered scathing reviews on social media, with major editors tweeting their disgust. Whether an Instagram picture of exhausted model Amina Blue taking off her shoes will prove to be more influential in terms of sales than critical words from the director of The Cut remains to be seen.

When you find out you not getting paid for #Yeezyseason4 pic.twitter.com/FEanm9FpDB

The instant age has also birthed fresh shopping demands. The seasonal presentations historically allowed editors to dictate new trends via print. It has become a somewhat archaic system, one that is now being negated by brands looking to pander to the new kind of fashion consumer. Leading the way at London Collections: Men in June was Henry Holland, who introduced rings embedded with an NFC chip to enable direct purchases from the catwalk. At New York Fashion Week SS17 Tommy Hilfiger is not only adopting this system but also prioritising consumer access to the show, with members of the public making up half of the 2,000-strong guest list. Similarly, Tom Ford ensured his collection was available in stores the moment the designs had debuted on the catwalk. Drawing on his flair for the cinematic, the designer created an immersive experience for voyeuristic non-invitees: 22 cameras were employed to capture not only the clothes but the atmosphere; models were adorned with cameras, and the mingling guests made up a ten-minute arrivals sequence. Fast fashion has moved from a term for throwaway high-street copies to become synonymous with the whole industry, where the pace of production is prioritized. Ralph Lauren also followed suit: “From the very beginning, I’ve always designed with you in mind. You are changing the way you live and the way you want to shop, and we are changing with you and for you.” The designer stated in his instagram post.

Welcome to Day One of #NYFW. See today's designers and watch the shows live: NYFW.com/LIVE.

As these movements become more ingrained in the way in which audiences engage with fashion, brands will have to decide where they want to position themselves. While many will embrace new technologies, a counter-movement has already sprung. Brands such as British-based Hillier-Bartley, Grace Wales – Bonner and NY labels Diane von Furstenberg, Kate Spade and Derek Lam have become more exclusive than ever, with select invites or private views for new collections. Whatever the outcome, there is no doubt that the fashion industry is currently experiencing a state of tremendous flux, and new trends will have consequences beyond informing which coat to wear this winter.