The Dark Side of Electronic Consumption 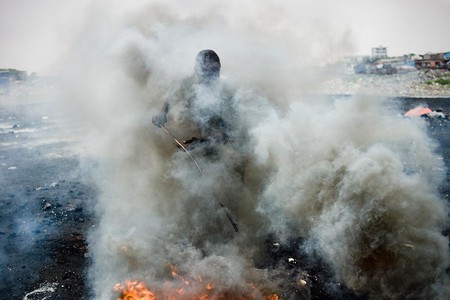 An interactive installation at A/D/O examines the insidious side of our electronic obsession.

How much do you think about electronic waste? Chances are, when you upgrade your iPhone, digital camera or laptop, you’re not thinking about what happens to it after it goes to a recycler. Disassembly, an immersive installation at Brooklyn’s A/D/O challenges that ‘out of sight, out of mind’ mentality by highlighting the dystopian impact of global e-waste on the world’s largest e-waste villages. In what artist Wiena Lin calls a “prompt for empathy,” Disassembly encourages participants to re-evaluate their own e-consumption by examining the reprehensible side of our collective consumerism. 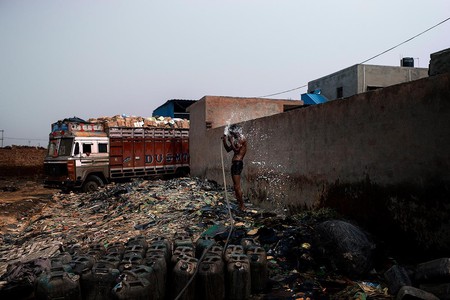 Lin’s Disassembly consists of a conveyor belt with plastic bins and a heap of recycled electronics; here, participants are invited to deconstruct the remnants of keyboards, computers, and other electronic waste, mimicking the daily activities of marginalized e-factory workers. While participants are immersed in the activity, award-winning images from Berlin-based photographer Kai Löffelbein scroll through a series of small screens, positioned in the center of the installation.

Löffelbein’s photography series, CTRL-X: A TOPOGRAPHY OF E-WASTE, turns a lens to the horrifying electronic waste trails from the US and Europe to New Delhi, China and Ghana. His photographs depict a haunting “post-apocalyptic” scene: craggy heaps of keyboards, a dizzying tangle of modems and wiring, burning electronics – made only more frightening by the realization that these images are a present-day reality. 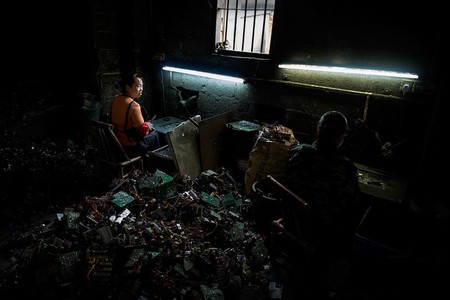 In one photograph, a collage of muddy brown-grey trash in a stagnant pool of chemically stained water reveals an ironically beautiful color palette; the calming hues are unsettling when considering their origins. In another image, mountains of electronic waste surround three crouching women (whose backs are facing the viewer) as they disassemble the discarded products. The wormy, wired remnants of old modems and keyboards clutter another frame, presenting a grotesque and fragile reality. And we are all responsible.

Culture Trip: Can you describe the installation in your own words, particularly for those who won’t be able to visit the show?

WL: It’s a recreation of a factory floor that simulates a place where e-waste would be disassembled. The experience is that instead of assembling something, you disassemble the electronic waste while watching Löffelbein’s footage of the global poor [doing the same thing] in some of the world’s largest e-waste villages. Amongst those images is a UNICEF Photo of the Year in 2011.

I really want to create advocates out of people who experience the installation, so that people can learn in a different context and at their own pace.

CT: What do you hope people get or experience from this installation and Kai’s imagery?

WL: It’s a place where someone might discover an interest in STEM studies. Maybe it’s even the mechanics of putting something together that sparks their imagination. And on the other side, they’re learning what happens with that waste stream. Because they’re performing the same task that others are performing in the photos, there’s a direct prompt for empathy.

CT: Yes, I can definitely see that. And what’s the significance of disassembling electronic parts?

WL: In the recycling facilities that adhere to the most strict safety standards, [there are] people separating the plastic from the electronics. The installation is sponsored by not only A/D/O, but also by two of the most highly regulated e-waste recycling facilities in NYC. There are very few of them, so we’re super lucky to have two on board. It helps to validate the importance of the work and the degree of awareness that we’re bringing to it. It’s not this fluff piece – it hinges upon principles that are verifiable. 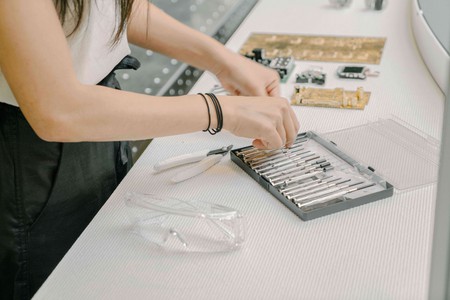 CT: What is e-waste exactly?

WL: Electronic waste is any sort of [discarded] electronic device, usually something with a plug and a circuit board or could be run on batteries. E-waste can also come from industrial facilities, but the main issue that I’m raising awareness about is consumer electronic waste. If we had a device that breaks or if we upgrade something, there’s not a lot of awareness about what happens to the thing we’ve thrown away.

CT: What are the current regulations set on e-waste?

CT: Once e-waste reaches a recycler, what happens to it?

WL: Usually they separate it into different piles and sell those piles to different people. That’s how one-third of e-waste ends up overseas, where it might be reused or repaired. But more often than not, it ends up in a village in the poorest place on the earth. E-waste is considered hazardous material, so it follows the same international standards as uranium.

33% percent of US e-waste is sent overseas and there’s no national regulation. | Courtesy of A/D/O

CT: What about international regulations?

WL: According to a treaty [The Basel Convention on the Control of Transboundary Movements of Hazardous Wastes and Their Disposal, AKA the Basel Convention] that was signed by 95 percent of the countries in the United Nations, you’re not allowed to trade hazardous material because you wouldn’t want a poor country accepting the material.

CT: Where are most of the e-waste villages located?

WL: In the US, most of it goes to China. In Europe, it goes to Ghana and India. But China, for example, has ratified the Basel treaty, so it’s illegal for them to accept e-waste; the US is a more developed country, but China still accepts the majority of our e-waste.

While we’re not breaking any of our own rules (the US is one of the only countries that has not ratified the Basel treaty), we’re allowed to send e-waste to undeveloped nations.

CT: What should people do with their e-waste here in the US?

WL: In a state that has a ban on throwing away electronics, the proper thing to do would be to take it to a recycler. I think Staples accepts e-waste now, but there’s no regulation once that e-waste reaches the recycler.

There [hasn’t been] any call to action aside from being more conscious about our consumption of electronics. But just bringing more thoughtfulness to sustainability and consumption in general, particularly surrounding plastic and metal, [is a start].

A closing panel will take place at A/D/O with Wiena Lin, Kai Löffelbein and other e-waste experts on August 16 2018 in Greenpoint, Brooklyn. For more on A/D/O, click here. 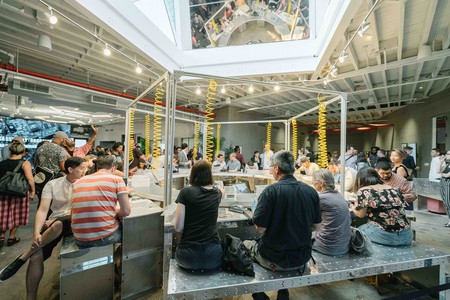