The Best Hotels to Book Near the Broadway Theater District, New York 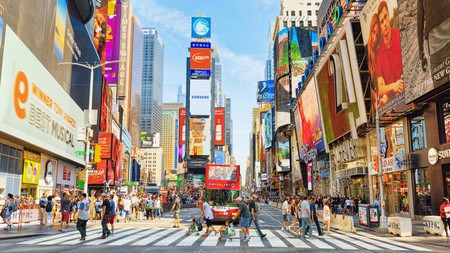 Sleep soundly after the show’s over with the finest places to stay in this New York neighborhood – easy to book now with Culture Trip.

If you’re a theater aficionado looking to catch a Broadway show – or three – why not stay right in New York’s Theater District? Firstly, it’s convenient: you won’t have to worry about traveling back to your accommodation after a late-night show. Secondly, you’ll be in ultra-close reach to other tourist hot spots such as Times Square, the Rockefeller Center and Central Park. Lastly, you’ll be right amongst one of the city’s most bustling areas. Here are our favorite options for hotels to book near New York‘s Broadway Theater District. 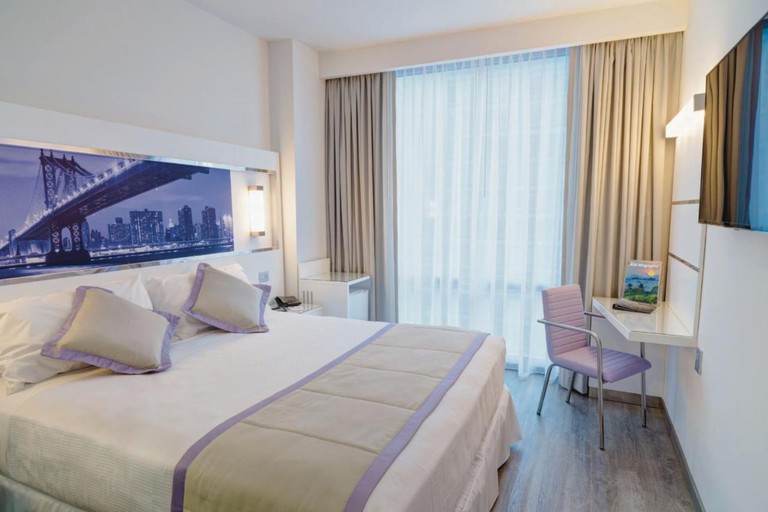 For a four-star hotel barely two blocks from Times Square, Hotel Riu Plaza is almost shockingly affordable, with rooms starting at under $150 (£109.91) – depending on when you book, of course. The bright modern rooms feature bold splashes of color and many look out to the skyscrapers of Midtown Manhattan. The hotel’s various room configurations include solid options for families – and amenities include a gym and restaurant offering buffet meals. 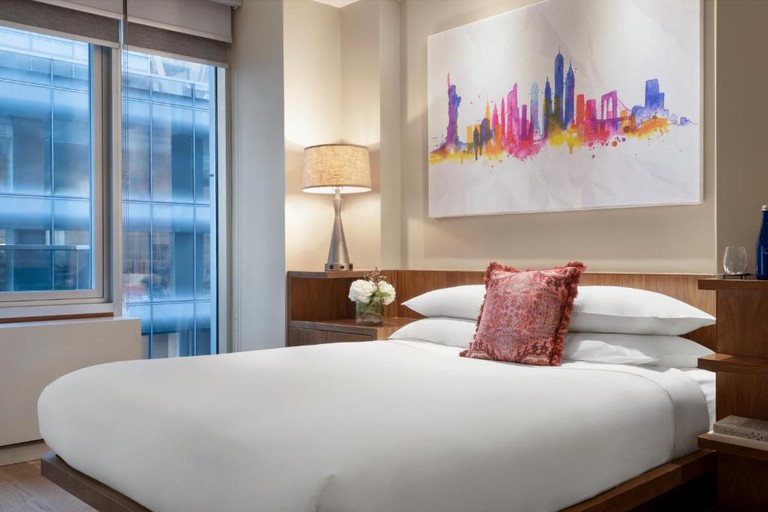 Courtesy of the Gotham Hotel / Booking.com

A gem amidst the many chain hotels around Times Square, the Gotham is a sleek boutique beauty – an independent hotel with just 67 rooms, it’s an intimate affair and each floor of the building has a maximum of four rooms. Expect a Scandinavian-inspired design with lots of wood fixtures, lofty ceilings and extra-large bathrooms. Most rooms also have balconies, a major bonus. The hotel is tucked a little to the east of Times Square, near Grand Central Station – a slightly quieter area that’s still close to the hustle and bustle you’ll come to Manhattan to enjoy. 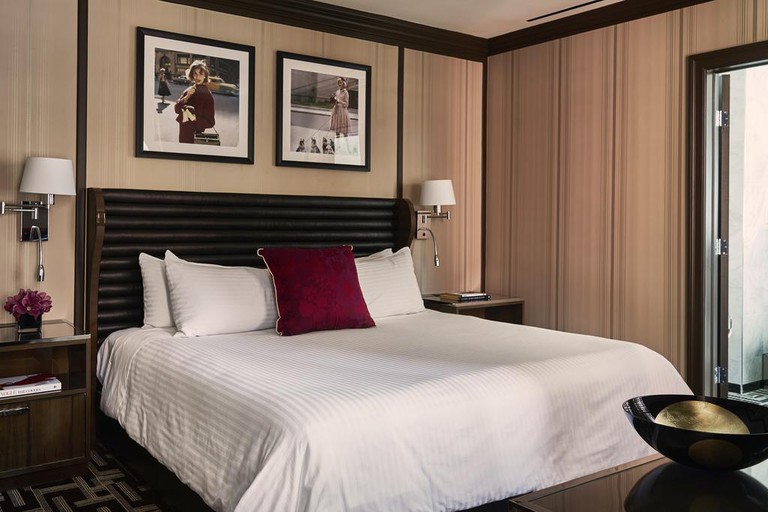 Balanced perfectly – right in between Bryant Park, Times Square and the Rockefeller Center – this is an exquisite boutique hotel. With a storied past dating back more than a century, it’s an elegant alternative to some of the flashier modern accommodation options in the area. With luxe walnut-toned furnishings and mosaic-tiled bathrooms, the Iroquois’ rooms – from standard up to suites – echo New York’s gilded age. The hotel also boasts an excellent gym, complete with Peloton bikes and a speakeasy-inspired cocktail bar, Lantern’s Keep – the perfect spot for one or two pre-dinner margaritas. 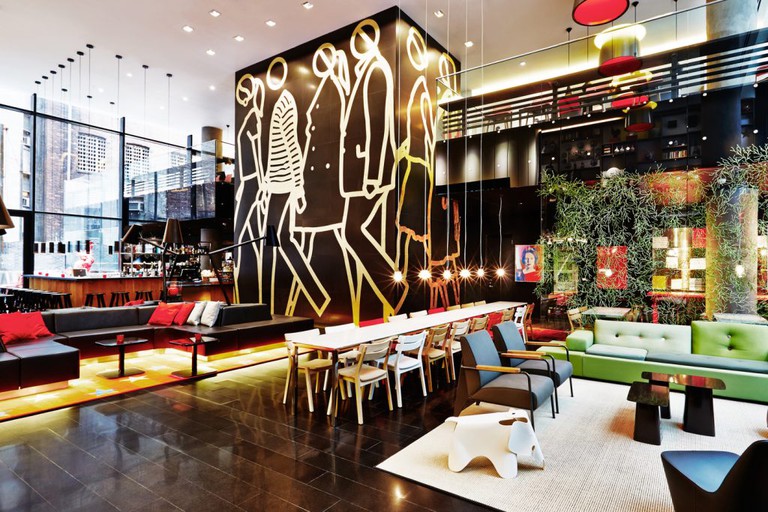 This cool and casual spot is plum on 50th Street, a few blocks north of Times Square and the theaters close to it. Guests return again and again for the bright, bold rooms with pop art-esque splashes of color, huge windows and colored mood lighting. Take note that the hotel only offers one room type – which means no suites or penthouses – with one extra-large king-size bed, making CitizenM great for couples, while families will need to reserve extra rooms. When you’re not napping, there are great social spaces, too – a rooftop bar among the skyscrapers and a funky communal living room with books for you to flick through. 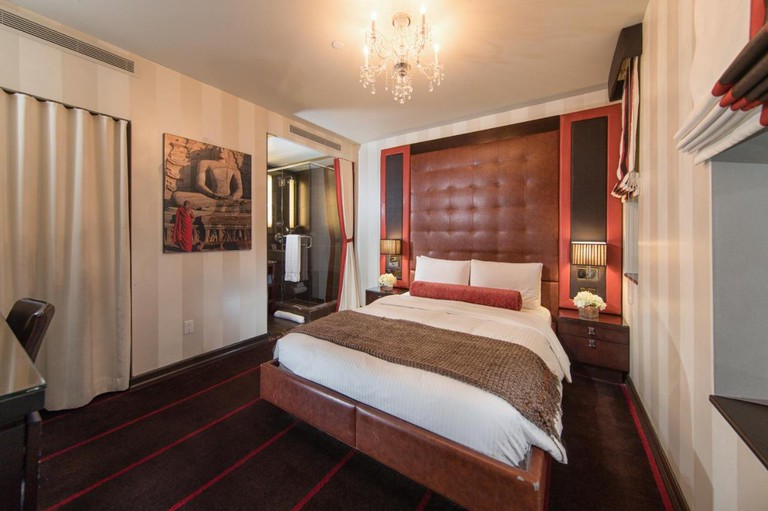 A sanctuary both in name and nature, this hotel presents a flavour of early 20th century New York glamor: its swanky rooms have been designed with a vintage chocolate-colored palette in mind. And despite the tasteful design, rooms are eminently affordable, starting at little more than $150 (£109.91) per night, which includes continental breakfast delivered to your room. The hotel also has not one, but two rooftop drinking and dining options – a Japanese restaurant, Sushi Lab and Haven Rooftop, with a full bar and modern American menu. Settle in for a night filled with crabcakes and NY strip steak. 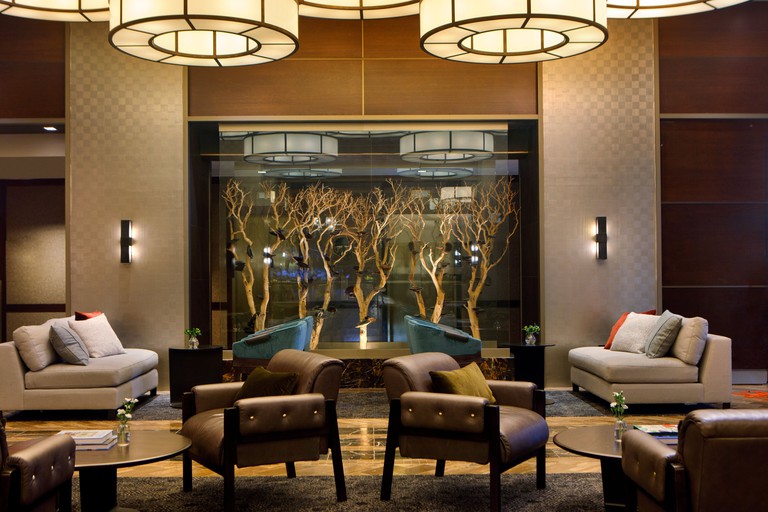 Barely a block away from Times Square, the Muse is a striking place – with rooms adopting a retro-yet-modern black-and-white design scheme. Check-in and you’ll find yoga mats, super-soft Frette linens and marble baths. Bring your pooch, too, as pets are allowed at no extra charge. The hotel’s amenities are particularly well-rounded – you’ve got free bike loans, evening wine hours, book recommendations and a very well-equipped gym. Sit back in the Muse Bar for a negroni or martini before heading out for dinner – there’s no shortage of dining options in the vicinity. 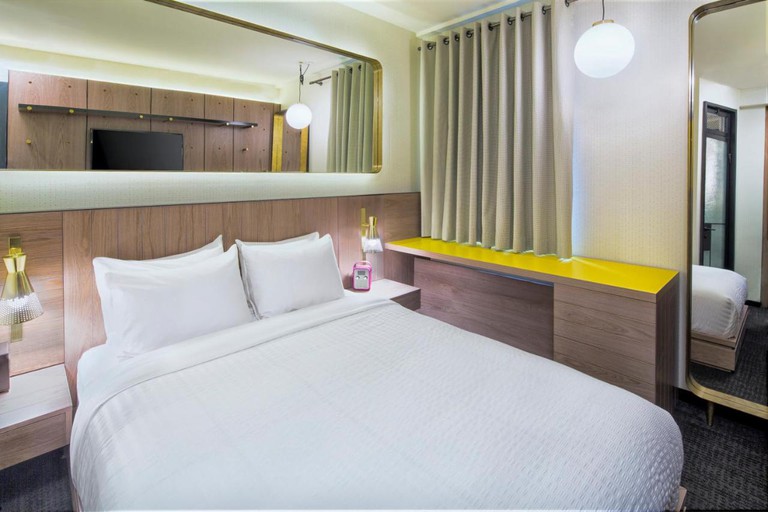 Here’s a no-fuss option just a couple of blocks south of Times Square – Hotel Shocard is a particularly affordable option if you want to base yourself in the heart of Manhattan without taking out a mortgage for the privilege. The rooms are simple and comfortable and families and small groups can book suites with pull-out sofa beds – accommodating up to four guests. For a drink or a relaxing meal, there’s a rooftop terrace, as well as creative comfort food at casual in-house restaurant Gleason’s Tavern: the triple-decker turkey club is a winner. 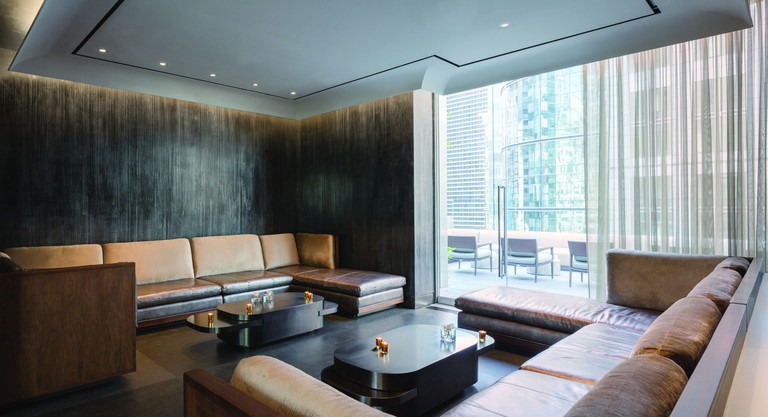 Courtesy of the Knickerbocker / Expedia
Occupying a beautiful Beaux-Arts building right on Times Square, the five-star Knickerbocker is a luxurious gem amidst the frenetic activity below. With large windows and high ceilings, the 330 rooms are resplendent in understatedly chic grey and cream tones – a soothing contrast to the glitzy colors of Times Square. The swanky rooftop bar, St Cloud is especially worth your time – with clouds of greenery, creative cocktails and craft beers, it’s a classy spot to unwind. Additionally, the in-house restaurant, Charlie Palmer at the Knick, also does a mean martini.

Looking for something a little more special? Stay in one of the best boutique hotels in Times Square or explore places to stay with suites in the city, now bookable on Culture Trip. If you’re in the Big Apple for cultural experiences, from tours of the city for film lovers and discovering food that originates from NYC, you won’t be disappointed.