The Best Hotels in Tribeca, Manhattan 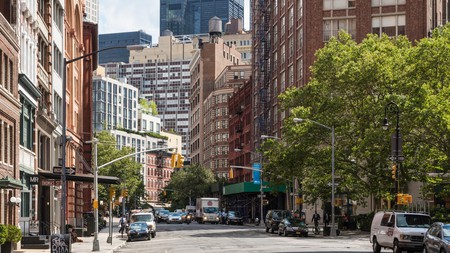 As well as its maze of cobblestone streets, gorgeous gastronomical restaurants and towering celebrity-filled apartment blocks, this cinematic neighborhood has made its name as the host of the yearly Tribeca Film Festival. Follow the example of the Hollywood bigwigs and stay in one of the best hotels in Tribeca.

Tribeca (a shortening of Triangle Below Canal Street) is a pulsing social hub with a vibrant art scene and striking views of the Hudson River. The neighborhood, which was once the home to industrial warehouses and factories, has transformed into one of the wealthiest in Manhattan and attracts floods of visitors year-round. Culture Trip has picked out the cream of the crop for your next trip Downtown. 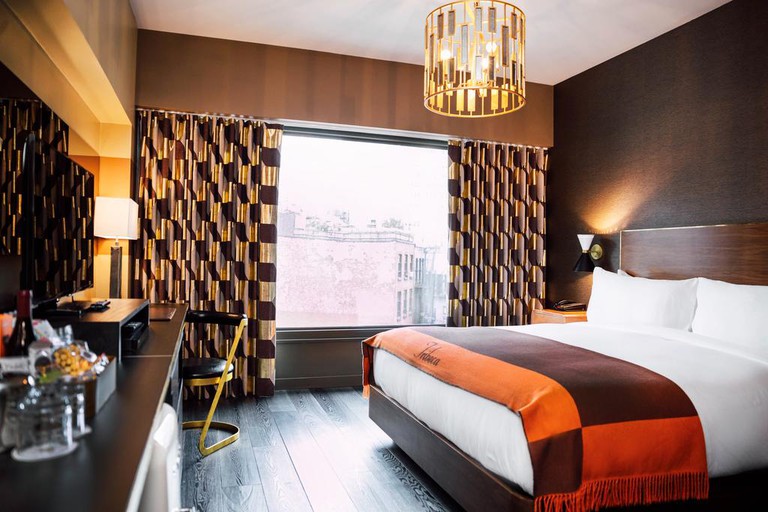 Formerly the Tribeca Grand, The Roxy is full of character. Named after the palatial 1920s movie theater – and 1990s nightclub of the same name – this hotel is a playground for travelers looking for entertainment. It houses a subterranean jazz club, The Django, as well as an Art Deco-inspired movie theater that specializes in foreign and independent films. On the ground floor, Paul’s Cocktail Lounge, an intimate bar with speakeasy vibes, is helmed by Paul Sevigny (Chloe’s brother) and attracts an international (celebrity) crowd. 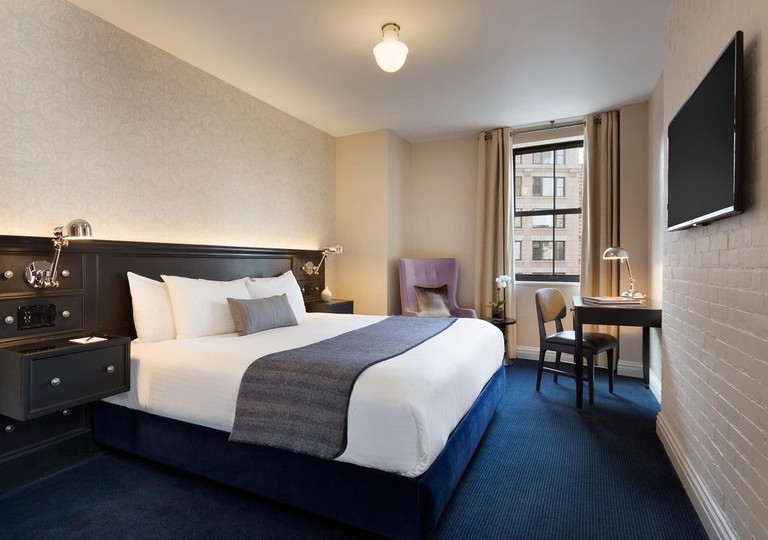 Courtesy of The Frederick Hotel / Expedia.com

This super-stylish hotel attracts creative types from all over the world. The Frederick artfully weaves its vintage sensibility into the modern and minimalist design of its guest rooms with exposed white-brick walls, elegant wallpaper and subway tile in the bathroom. While the rooms themselves do tend to be smaller, the hotel more than makes up for it with its excellent location. Guests have easy access to major bus and subway lines that make it convenient to explore all that Tribeca and Downtown Manhattan have to offer. 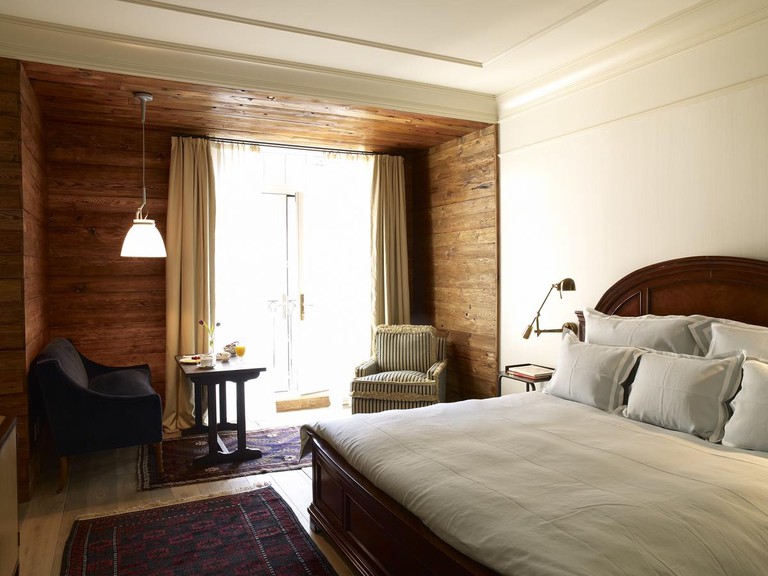 Courtesy of The Greenwich Hotel / Hotels.com

The Greenwich Hotel is synonymous with downtown luxury and sophistication. Indulge in its sexy underground Japanese pool and spa, or recline with a drink in its vine-covered courtyard. Rich textiles, gorgeous light from long casement windows and French balconies give the rooms an inviting European feel, but the Japanese wabi-sabi aesthetic inspired the design of the dreamy Tribeca Penthouse. It’s worth every pricey penny – raw concrete and natural materials flow seamlessly into a wisteria-canopied terrace with a lagoon-like spa pool. Don’t miss out on an evening at down-to-earth Italian restaurant Locanda Verde, where sublime homestyle cooking comes from the mind of renowned chef Andrew Carmellini. 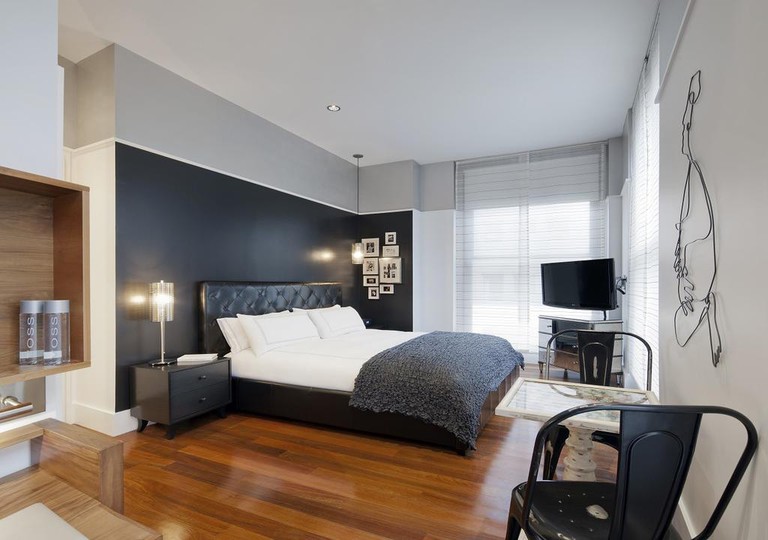 The Duane Street Hotel is right in the heart of Tribeca and offers thoughtful amenities such as pet services (including personalized dog bowls) and a complimentary bike-sharing program, complete with a lock and helmet. Rooms feature black and white leather furniture, and many have large working desks, making this a great option for business travelers who want to make the most of their time in the city. Its restaurant, on the other hand, will be a hit with the eco-conscious traveler. The aptly named Graffiti Earth takes a sustainable approach to dining, with plant-based dishes and repurposed furniture – even the napkins, table mats and glasses are made from renewable materials such as recycled newspapers and old wine bottles. 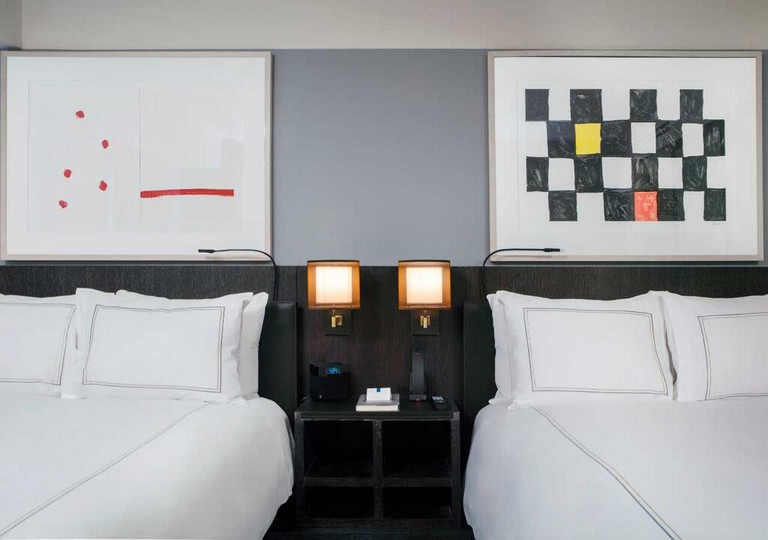 The Conrad’s location in Battery Park City, just past the West Side Highway from Tribeca, offers guests stunning views of the Manhattan skyline to the east, and the Hudson River and New Jersey to the west. Its cavernous lobby, adorned with a 10-story Loopy Doopy art installation by Sol LeWitt, is a sight to behold. Steps from the One World Trade Center, the hotel is close to major tourist attractions. The rooftop bar offers great backdrops for Instagram posts, including the Statue of Liberty in New York Harbor to the south. 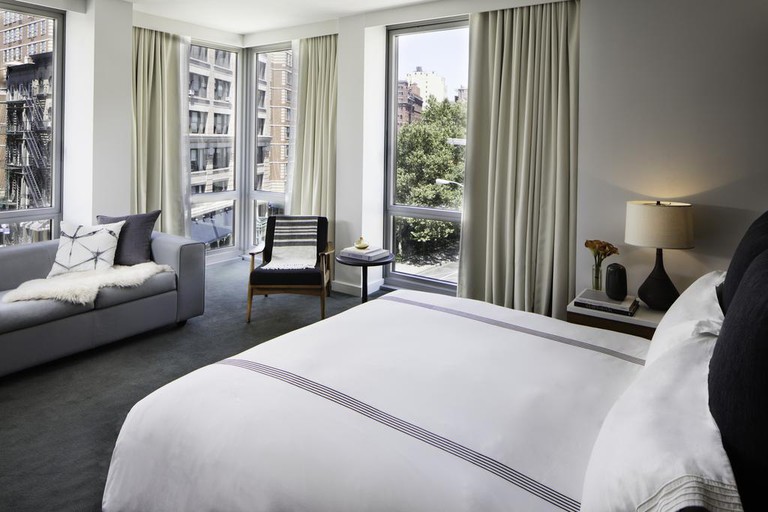 Courtesy of AKA Tribeca / Expedia.com

The layered cream-colored concrete and glass facade of the AKA Tribeca has put a striking stamp on the neighborhood’s streets. Inside, the decor is reminiscent of the golden age of travel – smoky marbled walls, a monochrome palette and dreamy, jet-set-inspired photography are softened by homey touches such as faux-fur rugs and enveloping bucket chairs. Rooms can range from grayscale standards with queen-size beds to the penthouse with its matte black floor, Zen-like layout, a sprawling terrace and never-ending city views. Cozy up by the modern gas fireplace in the A.Lounge or head over to restaurant Little Park to dine on seasonal dishes like black scampi ravioli. 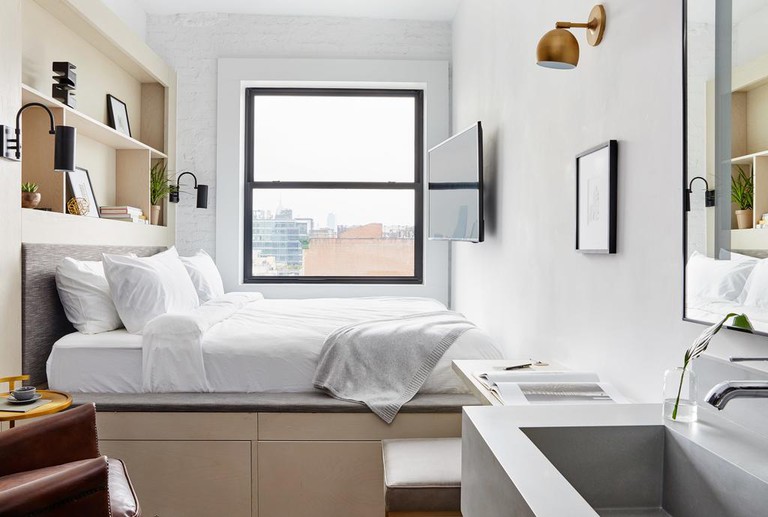 Within striking distance of Chinatown, SoHo and the Financial District, Walker Hotel Tribeca is perfectly placed to fully immerse yourself in the cultural buzz of the Big Apple. A honeycomb canopy of lights marks the entrance, and in the lobby, you’ll find caramel leather sofas, potted plants bursting with creeping vines and a mineral-rock-style coffee bar lined with buttery pastries – all utterly befitting of its Tribeca locale. Travel up golden lifts to characterful rooms filled with intricate architectural sketches, smart TVs, whitewashed exposed-brick walls and C.O. Bigelow bath goodies in the marble-tiled bathrooms.

If you’re looking for one of the best views in the city, check into one of these NYC hotels with balconies – they’re all bookable on Culture Trip.

This article is an updated version of a story created by Christine Kandic Torres.