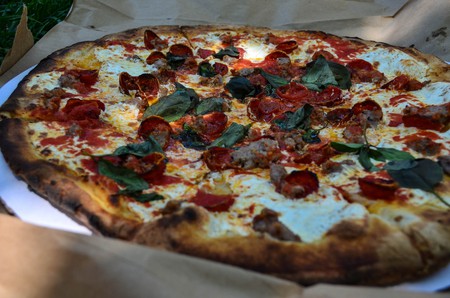 One dollar slice pizza is a difficult topic. We all know the feeling of being hungry, late at night, possibly intoxicated, and craving pizza. And in New York, in these moments, that means dollar pizza. The problem with the dollar slice, however, is that you get what you pay for, and it’s important to know that if a slice of pizza that costs you one dollar will not be the best slice of pizza you’ve ever had. That said, it doesn’t really matter. It’s about satisfying a craving cheaply and immediately, and there’s something about a dollar slice that hits the spot every time. If you’re craving a slice, here are some places you might want to go.

Restaurant, Italian
Facebook
Email
Twitter
Pinterest
Copy link
Share
Map View
Vinny Vincenz‘s pizza is actually good enough that you might eat it when sober, in broad daylight, so the fact that they serve a dollar slice is truly wonderful. The owner grew up in Carroll Gardens, Brooklyn, and has been working in pizzerias since he was 13, so he certainly knows a thing or two about pizza. So if you’re in the East Village around 4am, grab a slice from Vinny Vincenz, and your wallet and stomach will be happy.
Open In Google Maps
231 1st Avenue, Manhattan New York, New York, 10003, USA
+12126740707
Visit Website
Give us feedback

2 Bros Pizza has multiple locations around the city, and over the years, it’s become a staple in the world of dollar slice pizza. 2 Bros is packed at all hours of the day (not just after midnight), and their slice is soft and doughy. As with many dollar slice joints, it may not be the best slice of pizza you’ve ever eaten, but it’s cheap, quick, and bizarrely satisfying.

99 Cent Fresh Pizza is another spot with locations all over the city, and luckily, you’ll know from its name that it’s a place for a fast and cheap slice. Its original location was near Port Authority Bus Terminal, and it’s been an icon of dollar slice joints for years. Now that it’s expanded around Midtown and to the East Village, you won’t have to go far for a slice.

Another East Village spot, Mamani is where to go if you’re looking to eat your slice in peace. Much quieter and less crowded than 99 Cent Fresh and 2 Bros, Mamani’s slice is lighter and less dense than its competitors. Plus, if the pizza doesn’t quite hit the spot, they also have falafel pitas and platters to satisfy all your late-night needs.

Bar, Pizzeria, Fast Food, Vegetarian
Facebook
Email
Twitter
Pinterest
Copy link
Share
Map View
Percy’s is a dollar slice joint in the heart of New York University, so you can bet it’s always packed. It’s become a prime spot for hungry students out on weekends as they hop from bar to bar, and Percy’s has become known as a dollar slice spot that’s actually pretty good. If you’re in the neighborhood, definitely check it out and see what all the fuss is about.
Open In Google Maps
190 Bleecker Street, Manhattan New York, New York, 10012, USA
+12123881355
Visit Website
Give us feedback

Pizzeria, Restaurant, American
Facebook
Email
Twitter
Pinterest
Copy link
Share
Map View
It’s true – Joe’s Pizza costs more than a dollar, but this list just wouldn’t be complete without it. A slice from Joe’s is truly one of the most satisfying and delicious things you can eat in New York City for any price, and it’s well worth the extra few bucks. It’s been called ‘the absolute best slice of pizza in New York’ by Grubstreet, and it’s been a beloved institution for years, so if you’re willing to shell out just a little bit of extra cash, do it at Joe’s, and you won’t regret it.
Open In Google Maps
7 Carmine Street, Manhattan New York, New York, 10014, USA
+12123661182
Visit Website
Give us feedback

Pizzeria, Italian
Facebook
Email
Twitter
Pinterest
Copy link
Share
Map View
Scarr’s Pizza just opened this year on the Lower East Side, and it’s brought a cheap slice joint to a neighborhood that’s always needed one. Slices will run you a few dollars here, but again, it’s worth the price. The owner has worked at Joe’s, Lombardi’s, and other beloved pizza joints, so he definitely knows his pizza. His Sicilian slice is attracting lots of attention, and it’s putting Scarr’s on the pizza map.
Open In Google Maps
22 Orchard Street, Manhattan New York, New York, 10002, USA
+12123343481
Visit Website
Give us feedback
Give us feedback