The Art of Jean-Michel Basquiat: Legacy of a Cultural Icon 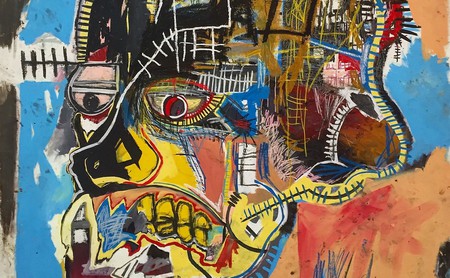 Brooklyn-born painter Jean-Michel Basquiat was one of the most acclaimed contemporary artists of his generation. The young, Black American’s graffiti-inspired works show evidence of his intelligence via a powerful combination of lively imagery and poetic text. The art world still marvels at Basquiat’s creativity through exhibitions like that at New York’s Acquavella Galleries, showcasing the Schorr family collection of his works on paper. 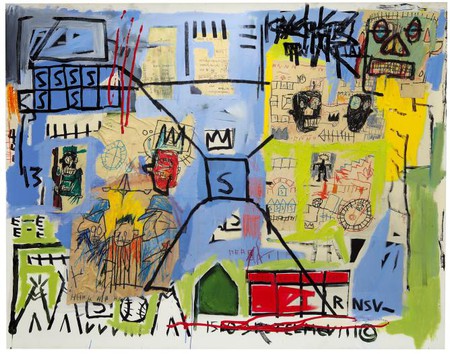 Jean-Michel Basquiat’s career only lasted eight years, cut-short by his tragic death in 1988. Nevertheless his works have continued to be greatly admired and shown globally. Early collectors Herbert and Lenore Schorr recognised that this medium was equally as important to Basquiat’s practice. The Schorr’s demonstrated faith in the artist from the very beginning; resulting in a collection of some of his most outstanding works. The exhibition at Acquavella Galleries has presented a selection from an approximate total of 1000 works produced on paper by Basquiat between 1980 and 1988.

Admired across the world, Jean-Michel Basquiat shot to fame in the early 1980s with his unmistakable brand of contemporary art. He astonished the New York scene by making the transition from unknown graffiti artist to internationally acclaimed Neo-Expressionist in just a couple of years. His primitive-looking but complex paintings were laden with colourful imagery and controversial phrases. Despite his lack of formal artistic training, his compositions entranced the viewer like those of an expert. During his brief career, he achieved more than many artists could have dreamed of, leading to much intrigue about his life.

Jean-Michel Basquiat was born in 1960 to a Haitian father, and Brooklyn-raised mother of Puerto-Rican parentage. Together with Basquiat’s two younger sisters the family lived in Park Slope, Brooklyn. This multi-cultural upbringing meant that by the age of 11 Basquiat was able to read, write and speak fluently in French, Spanish and English. His parents and teachers recognised this intelligence, including his early artistic ability. Basquiat’s mother, Matilde, nurtured this talent and took him on inspirational trips to art museums in New York. The young boy would produce cartoon-inspired drawings alongside his mother, who had an interest in fashion design and sketching.

However, Basquiat did not have an easy childhood; in 1968 he was hit by a car, requiring a months recovery in hospital. That same year his parents separated, and their father Gerard raised the children. In 1974 the family moved to Puerto Rico for a few years before returning to New York. His mother had several spells in mental institutions, and Basquiat used to run-away from home as a teenager. Yet these difficult experiences did not determine the course of Basquiat’s life. His creativity still flourished, especially through his attendance at the progressive City As School in Manhattan. The high school encouraged a practical learning style to provide more benefit to gifted children than the conventional education system. 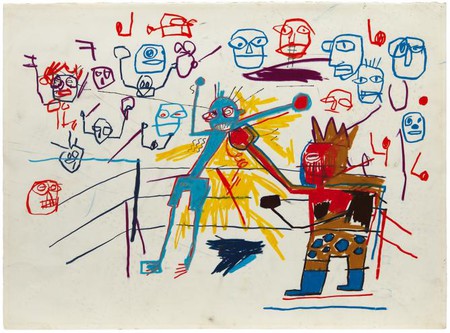 Whilst attending City As School Basquiat made friends with Al Diaz, a graffitist on the Lower East Side. Together they created a fictional character called SAMO who made a living from selling a fake religion. SAMO, short for ‘Same Old Shit’, became a graffiti tag, which they sprayed across Lower Manhattan. Fellow pupil Shannon Dawson, who would later become a member of the band Konk, also contributed to their SAMO project. Between 1977 and 1980 the SAMO graffiti became a prolific sight around the streets of downtown New York. The SAMO tag was often accompanied by poetic, yet sarcastic, statements commenting on a range of topics, from consumer society to the comfortable existence of well-heeled art students. Furthermore, the tag sometimes included a copyright symbol at the end, mimicking brand logos. However, when Basquiat fell out with Diaz in 1980 it spelled the end of the SAMO project, resulting in the appearance of the phrase ‘SAMO IS DEAD’.

In 1978, a year before graduating, Basquiat dropped out of high school and left his family residence. Homeless, he began living with friends and supporting himself by selling hand-painted T-Shirts and postcards. He was also producing drawings and collage that had elements of Abstract Expressionism. By 1979 Basquiat was creating graffiti on his own, focusing on the SoHo art scene where he could promote himself. He met fellow graffitists Keith Haring and Kenny Scharf who were studying at the School of Visual Arts. Furthermore, Basquiat had formed a band called Gray, named after Gray’s Anatomy, the influential reference book that his mother bought him as a child. However, Basquiat decided to quit the band when he started to receive praise for his art. In addition, Basquiat was turning into a celebrity, partly due to appearances on the live show, TV Party. He also starred alongside Blondie’s Debbie Harry in the film Downtown 81, known as New York Beat Movie, which was a fairytale version of his own life. The film was never released, but it helped put Basquiat in touch with key figures like Andy Warhol, with whom he would develop a close relationship. Moreover, Basquiat was able to use the film fees to buy materials to begin painting seriously.

Basquiat first received artistic recognition via The Times Square Show, a groundbreaking exhibition that introduced new contemporary art in 1980. The following year, art dealers grew interested in Basquiat when over 20 of his works were featured in the group show New York/New Wave, organised by Diego Cortez. Basquiat’s drawings and paintings appeared as child-like scribbles on the outset, but on closer inspection revealed serious ideas and comments about society. His early work would also incorporate some of the witty, but politically charged phrases used for the SAMO project. However, by the end of 1981, he no longer needed to associate with the graffiti tag because he was developing a global reputation as a young up-and-coming artist. Instrumental in launching this international career was Rene Ricard’s 1981 Artforum article, ‘The Radiant Child’, which would later become the name of a 2010 film about Basquiat.

Both the text and images in Basquiat’s works carry a great deal of meaning. Sometimes he made important statements about social injustice, at other times he simply commented on the banality of the modern world. His social commentary often focused on marginalisation throughout history, including topics like slavery and colonialism. His 1981 painting Untitled (Tobacco Versus Red Chief) is one such example, depicting a Native American chief staring at a fistful of what appears to be tobacco. The chief is enclosed by barbed wire painted around the edge of the canvas, suggesting the encroachment of new settlers on the land. Through titles such as Irony of Negro Policeman (1981), Basquiat’s work commented on racism and the plight of African-Americans. The figures he painted were often black, but were sometimes overlaid with, or outlined in, white, drawing attention to how race is portrayed. 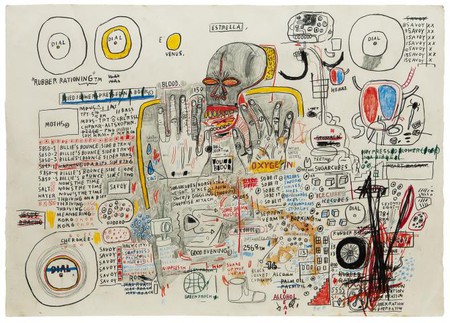 The human body, particularly the head, was a central feature in Basquiat’s works, influenced by his reading of Gray’s Anatomy. In 1982 he produced 18 silkscreen prints, entitled Anatomy, reflecting his fascination with the physical makeup of the body. Yet Basquiat was also interested in the thoughts and emotions of humans, shown through the busy marks he made inside the heads he depicted. This focus on the internal struggle linked him to Neo-Expressionists like Julian Schnabel and David Salle. His works were displayed alongside several Neo-Expressionists and promoted as new cross-cultural art in a 1982 exhibition at the Galleria Civica in Modena, Italy. Basquiat’s paintings were also compared to the colourful, frantic works of earlier artists like Cy Twombly and Jean Dubuffet.

Depictions of famous figures are also recurring in Basquiat’s work, as the artist took to representing musicians and sports stars, especially boxers. These stars featured alongside depictions of black Hollywood actors for a 1983 exhibition of Basquiat’s at the Larry Gagosian Gallery in Los Angeles. Paintings like Charles the First (1982) and Horn Players (1983) also demonstrated Basquiat’s interest in jazz music. He even managed to sustain his own musical activity at the same time as his artistic stardom. Basquiat would DJ at trendy Manhattan clubs and produced a rap record with artists such as Fred Braithwaite, Toxic, A-One, Al Diaz, and Rammellzee. Moreover, Basquiat’s fame grew as he began collaborating with artists like Andy Warhol and Francesco Clemente mid-way through his career. However, these collaborations did not receive consistently good reviews, which led to tension in Basquiat’s friendship with Warhol.

Despite his international success, Basquiat’s troubles with drug addiction were worsening as his career developed. The high value of his art led to paranoid feelings that his property would be burgled; feelings exacerbated by his drug use. Any bad reviews of his shows and ongoing difficulties with art dealers would often plague him. The final blow to his fragile state ocurred when Warhol died in 1987. During the hardest times, Basquiat had turned to Warhol for support and encouragement, leaving him devastated by the loss. Consequently Basquiat felt isolated in the Great Jones Street studio that he had originally leased from Warhol. It was in this New York studio that Basquiat overdosed on heroin in 1988, leading to his death at the young age of 27.

Basquiat’s tragic end echoed that of some of the famous people he admired. These icons included Jimi Hendrix and Janis Joplin, who also died of drug overdoses at the age of 27, and the jazz saxophonist Charlie Parker, who had similarly battled with heroin addiction. It is therefore poignant that Basquiat, an artist who craved stardom at a young age, and who courted this fame when it arrived, would eventually ‘burn out’ like his heroes. Yet his legacy is still strong among today’s contemporary artists, who continue to admire his creative spontaneity, his intelligence and the raw beauty of his paintings.