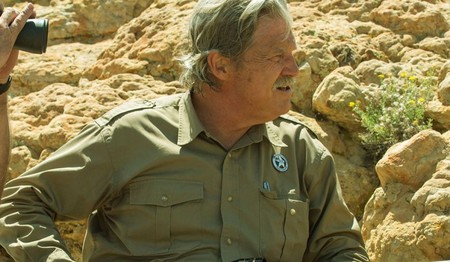 In the Western’s heyday, heroes were usually lean, handsome, and laconic loners. Modern Western heroes are gruff, lined, paunchy veterans with bad backs and ash in their hair. Why are these geezers as magnetic as their younger forebears?

The American West, and Texas particularly, may be “no country for old men,” to quote Cormac McCarthy, but old men have inherited what’s left of the movie genre that depicts it. The West Texas Ranger played by Jeff Bridges in David Mackenzie’s heist film Hell or High Water is the latest in a line of worn-out roosters and superannuated good ol’ boys whose creaking into action one more time is their defiant way of not “going gentle into that good night.” 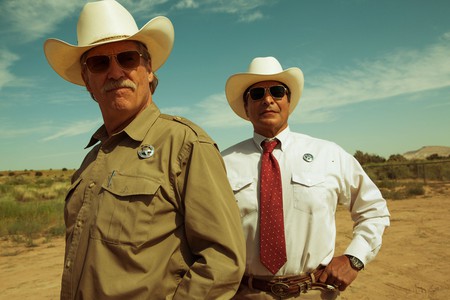 Modeled on the “rugged individuals” of early frontier myth – Daniel Boone and James Fenimore Cooper’s fictional Hawkeye – silent cinema’s greatest Westerners looked older than their years. The leathery William S. Hart, who was fifty when he became a star in 1915, and his heartier contemporary Harry Carey cut little ice in the Roaring Twenties when, after a spate of epics, the Western went into a temporary decline.

In the Thirties and Forties, Hollywood turned to younger, sexier leading men for sagebrush adventures: John Wayne (as lithe as a big cat in 1930’s The Big Trail), Randolph Scott (who played Hawkeye in 1936), Gary Cooper, Joel McCrea, Errol Flynn, James Stewart. and Henry Fonda. Their virile personas informed the Westerner’s role in turning the wilderness into a garden.

The pendulum swung backwards and forwards between young and ageing Western stars in the ’50s and ’60s. Oscar wins for John Wayne in 1969’s True Grit – an enjoyably hokey requiem for a one-eyed warhorse – and the sublime Ben Johnson in 1971’s The Last Picture Show helped pave the way for the ever-dwindling genre’s current reliance on age over beauty. Preceded by Richard Farnsworth’s ancient stagecoach robber in 1982’s The Grey Fox, Clint Eastwood’s pig farmer turned town-tamer in Unforgiven showed there was no killer like an old killer. Undeniably, though, the stars listed here draw on the memories of their salad days – and none of them has yet become an old coot like that customized by Walter Brennan in Red River.

JEFF BRIDGES
The high-spirits and recklessness of the youths played by Bridges in The Last Picture Show and Bad Company may have been tamped down by age but the wildness continues to surface. If his Hickok in Wild Bill was paradoxically muted, Bridges unleashed the bear in the Coen Brothers’ True Grit – a more psychologically complex and rewarding film than the John Wayne original. Playing a retirement-age Texas Ranger catching robbers in To Hell or High Water probably wasn’t a stretch for Bridges – though it was one for his shirt.

TOMMY LEE JONES
There’s a drawling Western Ahab in Jones, the genre’s most powerful presence since Clint Eastwood. As the director of the neo-Western The Three Burials of Melquiades Estrada and the retro The Homesman, he drew on the tragic history of the West to tell fatalistic stories about its casualties. As their star, he brought to them his cragginess and threatening demeanor. But he is full of surprises: as The Homesman’s George Briggs, a scurrilous claim jumper charged by a frontierswoman (Hilary Swank) to help her transport three demented women from the Nebraska plains to Iowa, he is given to dancing an antic jig on occasion. As the border sheriff Ed Tom Bell in No Country for Old Men, he delivers a great mournful speech, containing intimations of his mortality, about the unceasing cycle of violence in his county.

SAM SHEPARD
As a playwright and screenwriter (Paris, Texas), Shepard is a rueful laureate of the modern West, but too few period Westerns exploited his manliness and natural taciturnity when he was younger. The space program epic The Right Stuff, which partnered him with fellow Western actors Ed Harris, Scott Glenn, and Dennis Quaid, was the only film to elicit Shepard’s capacity for manifesting macho frontiersmanship. Self-contained and unflappable, he has always looked good around horses and women, his former partner Jessica Lange especially, and remained vital in his sixties. The mystery surrounding Butch Cassidy’s demise allowed Shepard to play him as an old man returning from Bolivia to the US in Blackthorn – a little-seen Western in which he excelled and finally looked his age.

KEVIN COSTNER
Costner’s journey from Silverado’s flashy kid gunslinger Jake to the briar-pipe-tugging patriarch Devil Anse McCoy in Hatfields & McCoys has been momentous, if undernourished by the Westerns he loves making. He was still a hearththrob – “our” SoCal Gary Cooper – when he directed and starred in the credibility-stretching Dances With Wolves. It won him Oscars, but his comparatively modest Open Range was a much better film. He had by now acquired gravitas, but nothing could save the leaden Wyatt Earp. He sometimes sports a bushy beard these days – hopefully, he will saddle up again to play a Judge Roy Bean or a General George Crook.

SAM ELLIOTT
The silver mane, the drooping moustache, the paint-peeling gaze, the subterranean voice – Elliott is the contemporary Western actor for whom the phrase “to the manner born” was minted. Above all, he looks as if he could have cut it at the Little Big Horn or the O.K. Corral: supporting Kurt Russell and Val Kilmer in 1993’s Tombstone, he helped it deliver a devastating pre-emptive strike against the following year’s Wyatt Earp. Hollywood has under-used his lazy sexuality (which likens him to James Coburn) while he has appeared in too many routine TV Westerns and neo-Westerns. The most poignant of the latter was Thank You for Smoking, in which he played a cancer-stricken former Marlboro Man.

KRIS KRISTOFFERSON
In an alternative Western universe, Kristofferson might have played Jeff Bridges’s onscreen older brother (not that he could have replaced Beau Bridges in The Fabulous Baker Boys). Imagine the whippings their characters would have doled out to each other after long nights in saloon after saloon. The director Samuel Peckinpah saw the romanticism in Kristofferson’s rock star persona and cast him as Billy the Kid opposite James Coburn’s Garrett, and then – in the small role of a biker who looked like the Doors’ Jim Morrison – in Bring Me the Head of Alfredo Garcia. His Harvard Man Gone West ages over the course of Heaven’s Gate and ends up back East; his performance ennobled Michael Cimino’s beautiful fiasco. He summoned all his magnificent weariness to play the corrupt sheriff in John Sayles’s Lone Star – the part a nostalgic nod to his Peckinpah past.

ROBERT DUVALL
Even when playing Boo Radley in 1962’s To Kill a Mockingbird, Duvall never seemed that young, but his vigor has preserved him from dodderiness. After playing the sly outlaw leader opposite John Wayne in the original True Grit, he was indelible as a laidback Jesse James in The Great Northfield Minnesota Raid. It was due to his and Tommy Lee Jones’s portrayals of the old Rangers that Lonesome Dove was a success. Though sporting frosty hair and a moustache, Duvall’s Gus McCrae didn’t seem a day over fifty: it still hurts to think of him becoming a bag of bones. He won the Best Actor Oscar for playing the drink-sodden country singer in Tender Mercies, the template for the Jeff Bridges vehicle Crazy Heart, in which Duvall also appeared. How smart Kevin Costner was to cast Duvall as his sidekick in Open Range. In his mid-eighties, seemingly unstoppable, Duvall wrote, directed, and starred in the Texas ranch drama Wild Horses.

Tommy Lee Jones is more monolithic than Russell, but the latter has latterly laid claim to John Wayne’s mantle with his natural braggadocio and startling impersonations of the Duke, dosed with parody though they are. The Wayne fixation began with John Carpenter’s 1981 Escape From New York, in which Russell’s Snake Plissken, his signature role, affected a Rooster Cogburn-like eyepatch. If his Wyatt Earp was bested by Val Kilmer’s febrile Doc Holliday in Tombstone, the uncredited directing Russell allegedly did on the film helped consign Lawrence Kasdan’s Wyatt Earp to Boot Hill. Looking much older, Russell dominated the first half of The Hateful Eight through his vicious bullying of Jennifer Jason Leigh’s frontier hag – but he was out-wheezed by Bruce Dern’s hoary Confederate general.