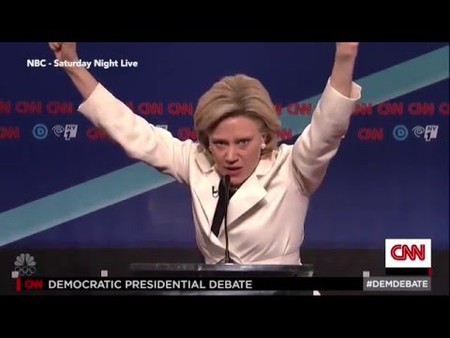 There is no greater time to be a Saturday Night Live (SNL) writer than during an election year. In honor of this year’s especially tumultuous primary season, we’re looking back at some of the best impressions from the ‘Not Ready for Primetime Players’ over the show’s impressive 41-year run.

How quickly things turned sour for President George H.W. Bush. The once beloved Vice President of Ronald Reagan assumed office with an 89 percent approval rating, but after his ‘read my lips: no new taxes’ talking point quickly failed, the country began to question poor Poppa Bush. Dana Carvey’s impression pulled no punches, depicting Bush the Elder as a warmonger whose silly mannerisms and hand gestures made it hard for the American public to take him seriously. After just four short years, Bush lost the 1992 election, paving the way for the skit below.

By episode four, SNL had already claimed its rightful place as the vanguard of political comedy. Sure, the fresh talent known as Chevy Chase might not have had a strong resemblance to our 38th president, but when it came to impersonating Gerald Ford’s notorious clumsiness, Chase was the man for the job. During his one-year tenure as SNL’s first breakout star, he repeatedly delighted audiences with trips and falls that solidified Ford’s reputation as the nation’s First Klutz. Sure enough, even the president couldn’t resist getting in on the joke, later appearing in several pre-recorded segments and setting an SNL precedent for other self-deprecating commanders-in-chief.

On the pantheon of great SNL impersonators, Darrell Hammond reigns supreme. As the cast member with the longest tenure in SNL history, Hammond’s incredible impressions have spanned three decades and over 107 different celebrities. But none of Hammond’s impersonations are quite as iconic as the one that catapulted him into the limelight back in 1995: President Bill Clinton. Always teetering the line between charming and creepy, Hammond’s incarnation of our 42nd president perfectly captures every trait that inspired the name ‘Slick Willie’. And today Hammond accepts the challenge of parodying a man who sometimes seems like a walking parody of himself: Donald Trump.

Will Ferrell as George W. Bush

For three years, Will Ferrell’s impression of our 43rd president was the cornerstone of any SNL political sketch. Ferrell’s term as George W. Bush covered the wild 2000 elections and ensuing Florida fiasco, and brought humor to the darkness in post-9/11 New York. Ferrell’s impression was the apotheosis of George W. Bush impressions, and even heard him a brief stint on broadway in 2009’s You’re Welcome America. A Final Night with George W Bush. As such, SNL never quite found a suitable replacement after his 2002 departure. Although Darrell Hammond, Chris Parnell and Will Forte gave it their best effort, no one could capture the ‘strategery’ of President George W. Bush like Will Ferrell.

During the 2008 elections, Tina Fey didn’t pick to play the role of then-Governor Sarah Palin; rather, the role seemed to have chosen her. Arizona Senator John McCain’s out-of-left-field (or perhaps very right field) decision to pick the fledgling Alaska Republican as his presidential running mate left many scratching their heads, but what immediately struck most audiences was Palin’s uncanny resemblance to the recent SNL veteran. Fey therefore had no choice but to make her triumphant return, appearing over and over again as the increasingly zany governor, countering ‘gotcha’ questions with nonsensical answers, classic one-liners about her proximity to Russia, and of course, finger guns.

No one could capture the essence of Hillary Rodham Clinton quite like Amy Poehler. During Clinton’s time as a New York Senator, 2008 presidential candidate and Secretary of State, Poehler was known for playing her as a strong politician, hiding her extreme hunger for the presidency under a friendly exterior, all with a remarkably similar pantsuit and laugh. And with pal Tina Fey by her side, Poehler delighted audiences as an incredulous Clinton, standing by Sarah Palin as she gloated about being nearly a heartbeat away from the presidency despite her questionable qualifications.

Not all of SNL’s iconic political impersonations have dealt with national politics. When New York Governor Eliot Spitzer resigned in disgrace in wake of a salacious prostitution scandal, little was known about his then-Lieutenant Governor David Paterson. But it wasn’t long before his successor became known for his own odd quirks, openly discussing his past drug use and extramarital affairs against the backdrop of an already turbulent state government. SNL’s Fred Armisen frequently pushed the envelope during Weekend Update, mimicking the Governor’s raspy voice, alleged hatred for New Jersey and self-awareness of his low poll numbers. Although initially a vocal opponent of the way in which SNL depicted visual impairment, the Governor eventually made his own appearance alongside Armisen during a 2010 broadcast.

The original choice of Fred Armisen drew criticism from journalists worldwide–many of whom likened the impression to a minstrel show–and shed light on SNL’s increasingly apparent diversity problem. But when Jay Pharaoh’s impressive repertoire of celebrity portrayals began to go viral (Jay-Z, Kanye West, Will Smith, and of course, Barack Obama), SNL nabbed the young stand-up comic as their own impression master. Nailing the cool, collected demeanour and analytical cadence, Pharoah has served as SNL’s resident presidential impersonator since 2010, covering everything from Obamacare, to the infamous sequester, to the 2012 election.

The 2012 elections were a busy time for Jason Sudeikis. Playing both the Democratic vice presidential incumbent and the Republican presidential nominee, his impressions stretched across both sides of the aisle to dramatically different characters. As America’s sweetheart Joe Biden, Sudeikis delivered an astute impression of the VP’s performance in the one and only vice presidential debates, mixing spitfire humor and even a little braggadocio in calling out Wisconsin representative Paul Ryan for his ‘malarky’. As former Massachusetts Governor Mitt Romney, Sudeikis perfected the GOP nominee’s polished New England style and clean-cut Mormon manner, while mocking his inability to relate to the common man and his ‘binders full of women’. Two polar opposites, both equally hilarious.

Another situation in which the Internet influenced SNL’s casting, the show’s latest political darling is no stranger to Studio 8H. Before hitting it big with Seinfeld and Curb Your Enthusiasm, Larry David struggled through one season as an SNL writer in 1984, having only one skit air at 12:50am – where all sketches go to join the b-squad. But when Vermont Senator Bernie Sanders started gaining momentum in his quest to become the 45th POTUS, Larry David was suddenly a match made in casting heaven. David does a pitch perfect impression of Sanders’s rejection of ‘establishment politics’ and plans to break up the big banks.