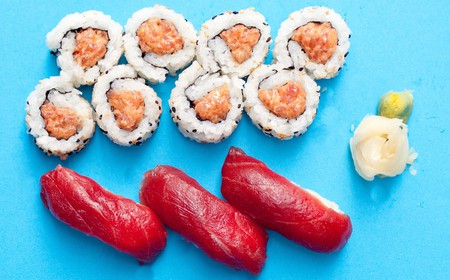 At Bigeye Sushi, robots run the kitchen. The new Brooklyn restaurant is ready to serve sushi-seeking New Yorkers within minutes thanks to machines that can slice and dice raw fish as skilfully as a seasoned chef.

A new fast-casual restaurant has just opened in Downtown Brooklyn under the leadership of restaurateur Harris Salat and culinary director Rick Horiike. Bigeye Sushi offers up your typical array of rolls and nigiri (raw fish or vegetables pressed onto mounds of rice); the twist is, all of are crafted on site by automated machines. 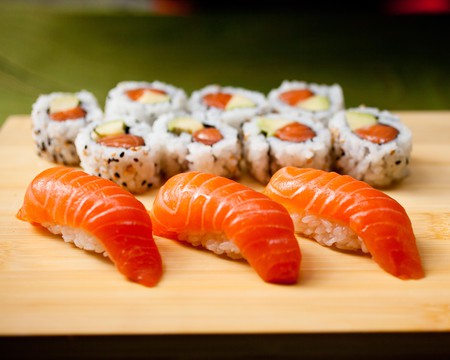 Here, three machines work in tandem. One ejects perfectly flattened rectangles of rice, ready to be sprinkled with a smattering of sesame seeds and crowned with nori, raw fish and vegetables by the overseeing sushi chef. It’s then quietly swallowed by the same machine and spat back out, flawlessly rolled – no carrot stubs peeking out of the heel. A second machine methodically chops the rolls into eight even rounds. The final mechanical chef focuses solely on nigiri: concave pockets are filled with warm, ovaluar heaps of white rice, all the same shape and size.

“We’ve always been interested in casual cooking. Rick and I started thinking about how to make sushi more accessible, but keep the quality high,” Salat explains. “Then Rick came across this technology, and the proverbial light bulbs went off, because it’s technology meets tradition.” 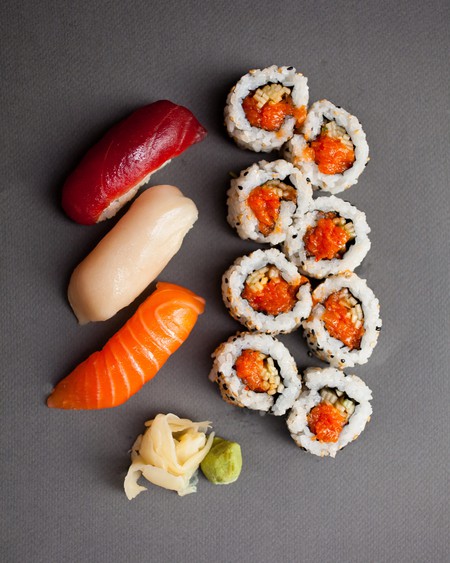 For a quick-service restaurant, this kind of technology makes sense. The equipment allows the team to produce sushi and rolls at an expeditious rate. In one minute, the machines can pop out 60 fingers of sushi rice, and 400 rolls can be completed within one hour – all perfectly precise and uniform. That’s an enormous amount of customers who can get their lunch quickly.

However, even with the help of sushi robots, humans are still crucial in the production line. Chefs break down fish and stir vinegar into the rice by hand. Behind the counter, cooks work away, expertly folding hunks of avocado and shards of cucumber into rolls before placing them in the chopper. They press sheets of fish onto warm stacks of rice, plating the two-bite pieces in plastic to-go containers. But the benefit of Bigeye Sushi’s automation means fewer people are needed to run the restaurant than a traditional sushi counter. 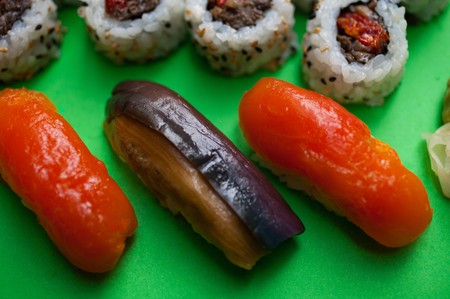 Rice can be topped with vegetarian options as well, like eggplant and tomato | © Heather Ramsdell

“I think that [technology] helps us reach more people. It allows us to do something like this and not charge $60 for sushi,” Salat says. “Otherwise we’d need a whole group of people making rolls, and we wouldn’t be able to create this kind of restaurant.”

Roll prices hover around $7 (at fancy sushi restaurants, they can cost upwards of $15), ranging from sriracha salmon to yellowtail jalapeño and tuna avocado. There are a handful of nigiri selections, including vegetarian options (tomato and eggplant, for example), as well as rice bowls and salads. A refrigerated case houses grab-and-go options like seaweed salad, edamame, and Japanese soda. With a prime location at 2 Metrotech Center, Bigeye Sushi is gearing up to feed a large lunch crowd, thanks to the speedy work of the sushi robots.

“Instead of a place where you get it out of a case, we make fresh sushi to order. What is our motto? Made fresh, made fast, made well,” Salat says. “That’s really what it boils down to.”