'Suspiria' Remake With Tilda Swinton Will Be 'Winter-ish, Evil, and Really Dark'

The Palermo-born filmmaker Luca Guadagnino has assembled a dream female cast for his fresh take on Dario Argento’s Suspiria, which is currently in post-production.

Inspired by the gory, gorgeous 1977 Italian horror film about a Freiburg dance academy run by a Greek witch and her murderous coven, Guadagnino’s remake stars Dakota Johnson, Chloë Grace Moretz, Mia Goth, Jessica Harper (who starred in the original when she was 27), Sylvia Testud, Milgorzata Bela, and Tilda Swinton. Guadagnino, who met Swinton in 1995, previously directed her in his first film, The Protagonists (1999), and later in I Am Love (2009) and last year’s A Bigger Splash. 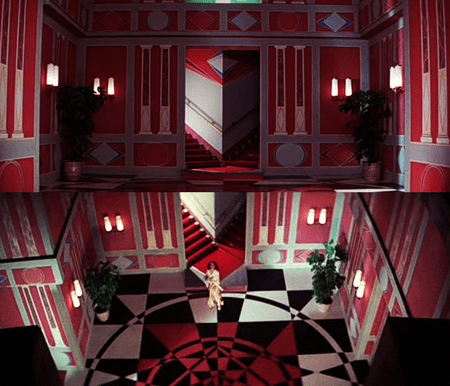 Guadagnino’s Suspiria will be markedly different to Argento’s classic, which set the tone for many of the Italian horror films (or giallos) that followed it in the early-to-mid 1970s. (A more recent legatee was Peter Strickland’s 2012 Berberian Sound Studio, which unfolds during post-production on an Italian horror film about atrocities in a girls’ riding school.) According to the Cineuropa website, Swinton, who plays Madame Blanc, the deputy director of the dance academy, was photographed on the Berlin set “disguised as an old man.”

“Like Luca’s got a real eye for aesthetic, like he’s a really tasty person, like he really knows what he wants and I think it’s going to be visually stunning,” Goth added.

Whereas Argento filmed his Suspiria in stunning primary colors, Guadagnino has opted for a limited color scheme apparently more reminiscent of German Expressionist cinema, the Gothic horror films made at Universal in the 1930s—or even Wim Wenders’ 1987 Wings of Desire.

Guadagnino told Variety that the new Suspiria is set in the divided Berlin of 1977: “It’s a film about guilt and motherhood. It has no primary colors in its color palette, unlike the original. It will be winter-ish, evil, and really dark.”

Amazon financed the production of the new Suspiria and will distribute it internationally. Before that, Guadagnino’s gay love story Call Me by Your Name, which was acclaimed at this year’s Sundance and Berlin film festivals, will be released in the US by Sony Pictures Classics.

The original Suspiria was distinguished by the presence of two great movie stars, Joan Bennett and Alida Valli. Bennett was cast by Argento on the strength of her 1966-71 Gothic soap Dark Shadows rather than for her formidable work in 1940s and 1950s melodramas and film noirs. Madame Blanc proved Bennett’s last role in a theatrical movie.

Suspiria marks the second time Swinton has stepped into a role previously played by Bennett. The 2001 Swinton thriller The Deep End was a remake of the 1949 Bennett vehicle The Reckless Moment.

Joan Bennett in the 1977 ‘Suspiria’ | © International Classics
Give us feedback