Storytown's Guy Story With His Ultimate Sounds of Soho Playlist 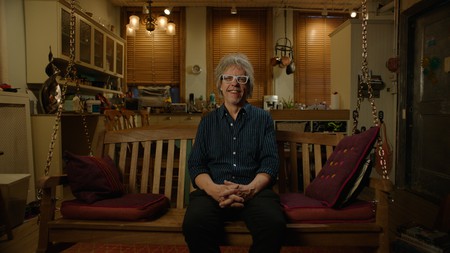 Guy Story, frontman of the band Storytown, reveals the tracks that inspire his love of SoHo, one of New York’s most famous areas.

Guy Story is what you call a SoHo veteran, having lived in the neighbourhood, in the same loft, since 1977.

He moved to the city to study computer science before trying to make it as a singer-songwriter and ended up helping to found Audible as its chief technology officer. He now lives with his wife, two daughters and dog. After leaving the hugely successful audiobook company, he returned to his first love – music – as the frontman of the band Storytown.

He has remained a fan of the area over the years, even as it’s undergone huge changes due to gentrification. “SoHo for me represents this do-it-yourself, non-conventional approach to life and, even though it has become an upscale mall and shopping district, it still has that feeling to me. It’s not a conventional residential neighbourhood in New York City. It represents freedom to live by your own rules.”

Guy Story on his Soho playlist

John Zorn is a fairly well-known guy in the avant-garde jazz world. I knew him a little bit in the very early days of living in SoHo. We would go to his apartment to listen to him and Eugene Chadbourne play while we sat on the floor. I wanted to capture that. The two of them together would improvise. This recording wasn’t made in his apartment but it’s a perfect example of the kind of thing we listened to. In a way it’s also representative of the experimental jazz scene in the early days of me being here.

For a time I studied jazz guitar with a guitar player called Barry Galbraith. He would have a workshop of three or four guitar players and we would play this particular song. He played on a few of recordings of music including this one. The recording itself predates me but it was interesting and challenging jazz music for the time. George Russell is famous for that.

I just picked this because I love this song and I listen to it a lot. It’s on a compilation called Native Dancer, which is one of my favorite albums of all time. Wayne Shorter is from Newark, New Jersey, which is nearby. He was in a famous group called Weather Report and I saw them back in the day in Texas before I came to New York. This song is on a list of records that I’d want with me on a desert island.

The next two songs belong to a certain era in SoHo. These are downtown New York bands. David Byrne lived in SoHo for a long time. I think he still has an office here. Even though they’re well known I thought I’d put them in because they’re great.

This guy called Robert Wilson collaborated on a crazy opera called Einstein on the Beach. It was performed in the Metropolitan Opera House in the Lincoln Center. It was five hours long with no intermission. I remember at the time it was a big scene. It was a hugely influential event for me. Andy Warhol was a few rows ahead of us.

David Bowie was a downtown New York guy. His kid was at our daughter’s school. I saw him a couple of times. It’s a great record that I connect with being in New York.

I’d just broken up with someone and was feeling pretty down and lonely when I first heard this. I just loved the whole album Diva by Annie – it’s another one on the shortlist. This song really evokes this time and place for me. I love it.

I’m not a huge Bruce Springsteen fan but this record is from the album The Rising which he put out after the 9/11 events here. It’s just a great record and evokes a bunch of emotions of that time. This is the lead track and it captures a very poignant and sad time.

Taylor Swift has a place a few blocks south of here, not so far away in TriBeCa. We went to see her twice with the girls. There are a number of songs that are New York songs and I think this is a pretty good one.