Step Inside David Hockney's Technicolor World at The Met 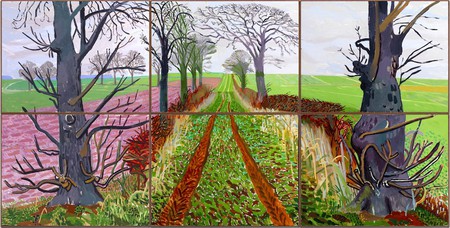 With a 60-year practice informed by humankind’s innate propensity to translate the world into pictures, David Hockney is in good company at The Met, where 5,000 years of consummate creativity converge along the international art history continuum. Following its record-breaking inaugural run at Tate Britain and then the Centre Pompidou in Paris, David Hockney, organized in honor of the artist’s 80th birthday, takes its final bow in New York City. 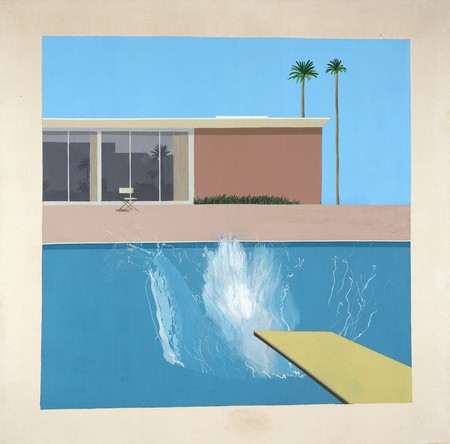 The artist’s expansive career unfolds chronologically to map his influences (both thematic and aesthetic) and trace his forays into drawing and photo-collaging. Every artwork glows with his wit and optimism, adding depth and dimension to the sun-drenched, jewel-toned paintings that he’s best known for.

With masterpieces such as A Bigger Splash (1967) in mind, Hockney’s early work may come as a surprise. Far from those blue California pools and lush Yorkshire greenery, much of the work that he created between 1960 and 1961 employs stylistic elements reminiscent of Francis Bacon and Jean Dubuffet to explore and communicate his homosexuality at a time when it was illegal in the United Kingdom. 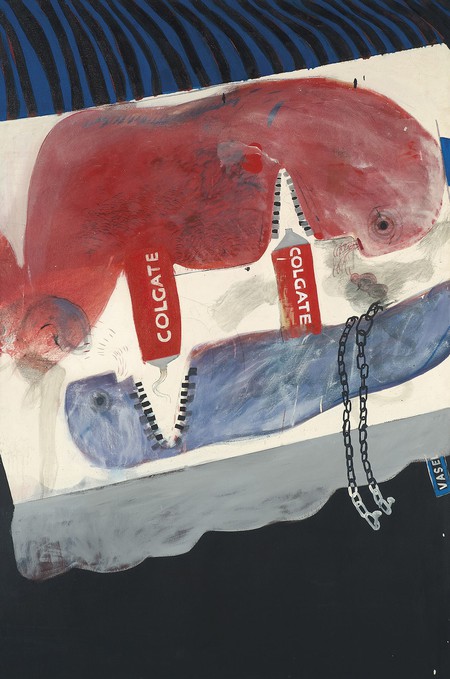 With his subsequent move to Los Angeles in the mid-60s following his graduation from the Royal College of Art in London, Hockney’s perspective shifts in more ways than one. His palette brightens, and he begins to experiment with space through landscapes and between people.

“[Hockney’s] method of working is informed by his insatiable curiosity and his rigorous exploration—both intellectual and technical—of the nature of perception and representation, lit by a sheer delight in the act of looking,” said Sheena Wagstaff, The Met’s Leonard A. Lauder Chairman for Modern and Contemporary Art.

“A consummately skilled draughtsman and a great colorist, the seeds of Hockney’s ability to challenge the conventions of picture-making perhaps lie in the first great painting that David saw—albeit in reproduction—Fra Angelico’s Annunciation (1437–1446),” Wagstaff continued. “In that wondrous early renaissance painting, the position of line, clear, bright color, and figures in a tight framework, with its own shallow spacial logic, was surely a lasting influence.” 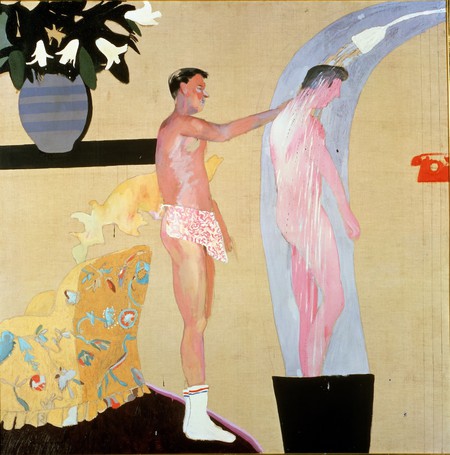 Hockney is particularly renowned for his landscapes and portraits from the late 1960s and 1970s, which “show the artist’s interest in the tension that exists in social relationships and the difficulty of depicting transparent material such as glass and water,” said the The Met in a statement. In the decades that follow, Hockney never abandons his fascination with depicting visual complexities; rather, his approach evolves over the years to explore these same subjects from different perspectives.

In the 1980s, Hockney began to fracture his artworks. While he maintained use of the same bright color palette, he experimented with the art of distortion by painting or photographing one scene in multiple segments. The approach is reminiscent of a “cubist perspective that mirrors both his interest in Pablo Picasso and his own experiments with Polaroid photography,” The Met continued. 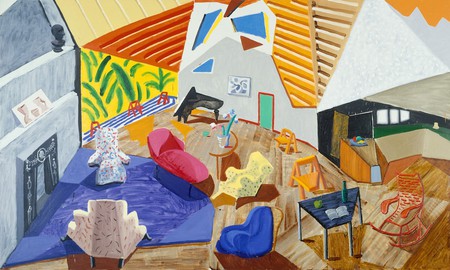 Ever-fascinated with the artists who came before him and the new technologies that develop rapidly in contemporary life, Hockney’s work possesses a timelessness. David Hockney concludes with the artist’s most recent artworks: painted landscapes, bolder and brighter than ever, and a selection of his iPad drawings. “Even to the most committed follower of Hockney’s art,” The Met said, “the unprecedented unification of his renowned early works with the newest, will be revelatory.”

Inhabiting the neighboring galleries are well over 100 masterpieces that comprise the museum’s largest Michelangelo exhibition to date; at the Met Breuer, a comprehensive survey of Edvard Munch’s unparalleled oeuvre. It’s only fitting that David Hockney is simultaneously celebrated among art history’s noblemen.