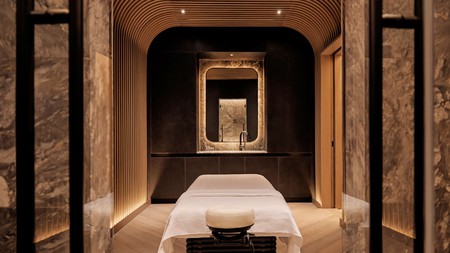 When visiting New York City, a trip to a spa can often be overlooked for its buzzing nightlife, endless eateries and countless parks to visit. Yet, these hidden oases are some of the best spas in the USA. Whether you’re after a proper pampering, a post-workout treatment or a world-class facial, we chart the best hotels for the full spa experience below. 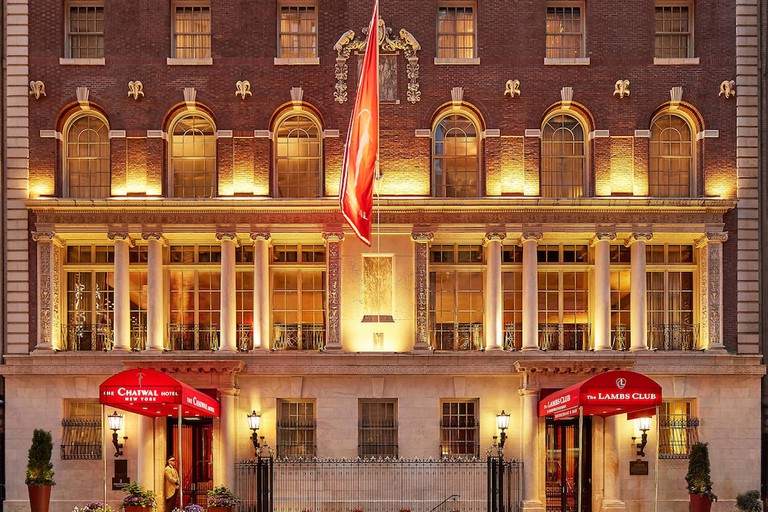 Courtesy of the Chatwal, a Luxury Collection Hotel, New York City / Expedia
View Rooms
From $651 Per night per room
Moments from both Times Square and Bryant Park, it’s hard to find a better-placed hotel for first-time visitors to New York City than the Chatwal. It is regularly voted as one of New York’s best hotels, thanks to its lavish furnishings and beautifully appointed rooms. Inside, the Mynd Spa offers a slew of tailor-made treatments. It’s worth spending a few hours here to experience its steam showers, saltwater lap pool and bubbling jacuzzi.
More info 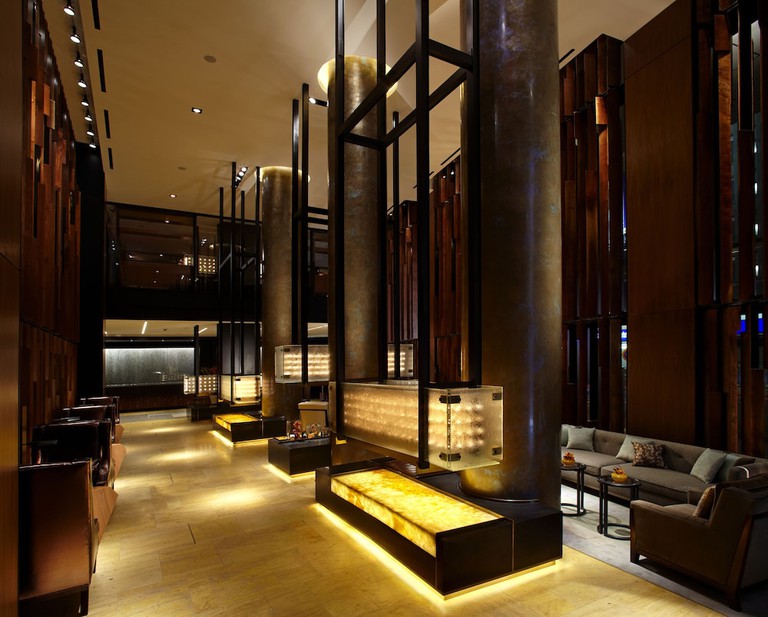 Courtesy of the Dominick / Expedia
View Rooms
From $435 Per night per room
Once you’ve taken in the incredible city views, courtesy of The Dominick’s floor-to-ceiling windows, it’s time to make a beeline for the spa. Here, 11,000sqft (1,025sqm) are dedicated to the Babor Signature Spa, which boasts New York’s first-ever traditional Turkish hammams (one for men and one for women). Its open-air pool is a marvel as well, allowing guests to swim with a backdrop of the SoHo skyline.
More info 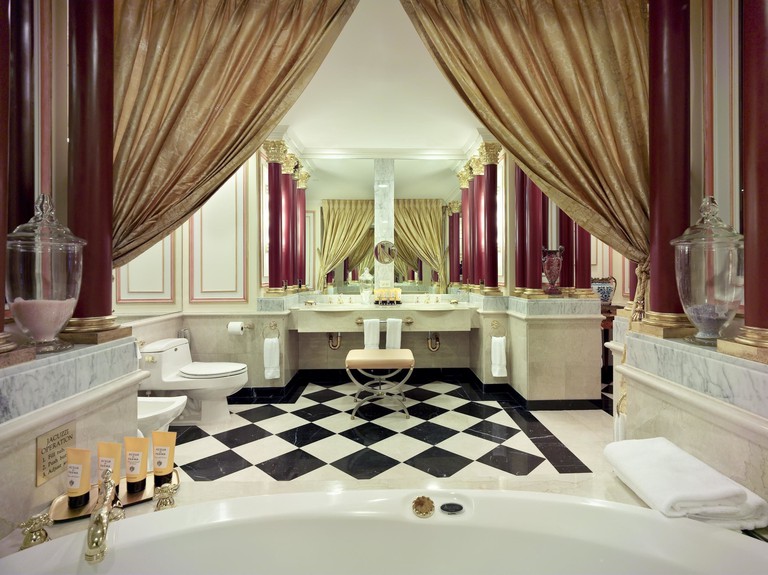 Courtesy of the Towers at Lotte New York Palace / Expedia
View Rooms
The perfect example of where old meets new, The Towers at Lotte New York Palace lies behind the facade of a neo-Renaissance 19th-century mansion and a 55-story glass-fronted tower. Its full-range spa offers a myriad of treatments, including its signature Swedish massage and a “wrinkle repair” facial. If you prefer treatments in the privacy of your suite, opt for that, too – including a romantic couples’ massage.
More info 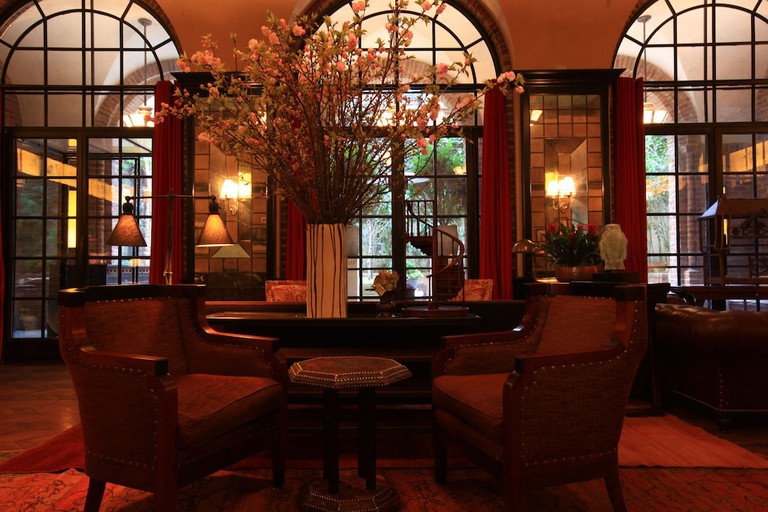 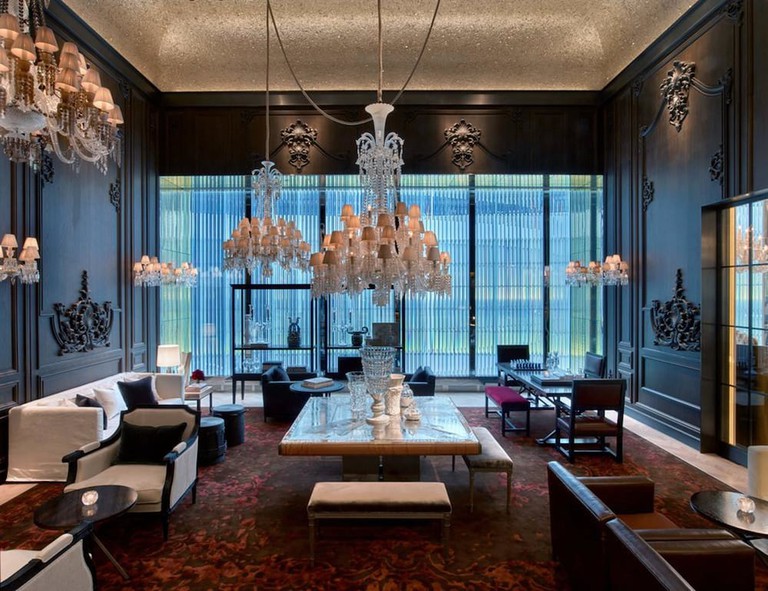 Courtesy of Baccarat Hotel / Expedia
View Rooms
From $757 Per night per room
When you’re done being bewitched by the crystal-heavy Gilles & Boissier design, Baccarat Hotel’s Spa de La Mer is the first dedicated spa to the cult beauty brand, La Mer, in the US. It’s located just steps from Fifth Avenue. Low lighting and sounds of the sea are calming as you enter the intimate spa (it’s got just four treatment rooms). Opt for the Baccarat Signature Facial Escape – on departure, you’ll be given a coveted Baccarat crystal ring.
More info 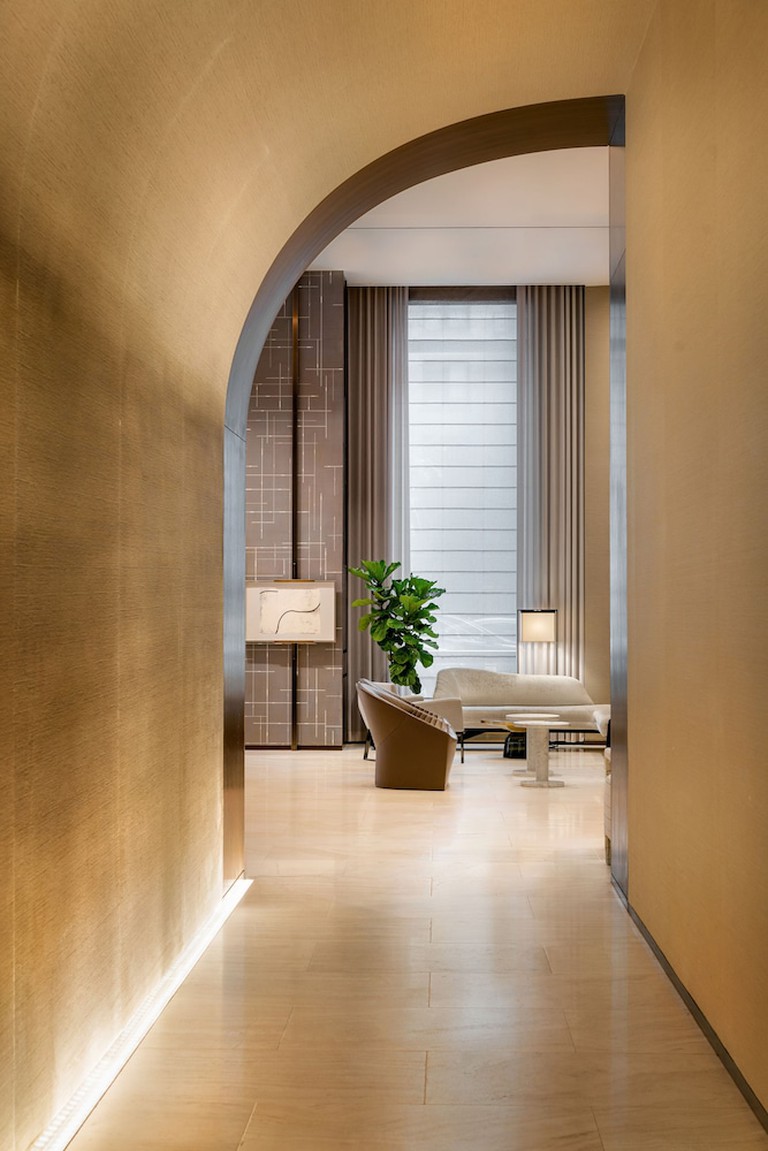 Courtesy of Four Seasons Hotel New York Downtown / Expedia
View Rooms
From $803 Per night per room
With Wall Street and the One World Trade Center just minutes away, this Four Seasons outpost places you in the heart of New York’s downtown financial district. A visit to its spa is a must. Swim in its mother-of-pearl lap pool or take part in a five-and-a-half-hour Royal Ritual (including a caviar facial and a four-handed massage). Be sure to book a session with one of the hotel’s resident healers: clairvoyance, acupuncture, chakra clearing and sonic alchemy are just a few of the therapies on offer.
More info 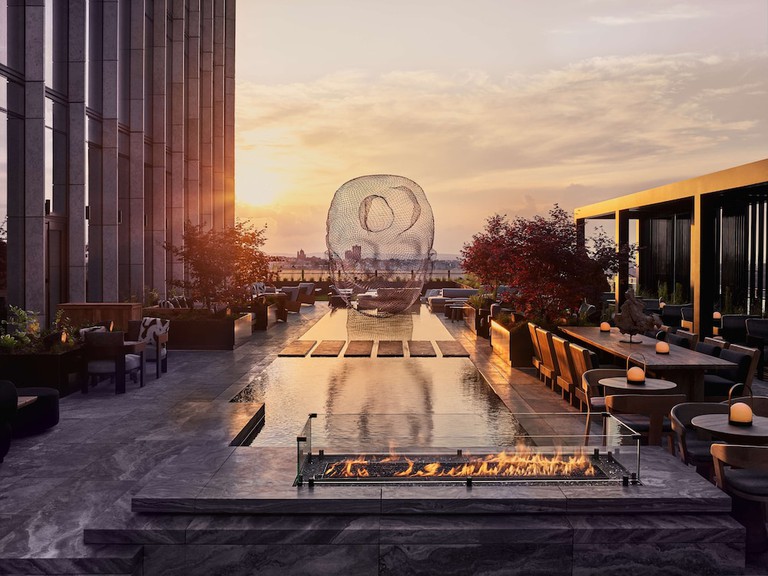 Courtesy of Equinox Hotel Hudson Yards / Expedia
View Rooms
From $839 Per night per room
The inaugural hotel from the cult gym of the same name, Equinox Hotel Hudson Yards bills itself as a place for those who “rest and play as hard as they work.” Rooms are sleek, designed with performance and regeneration in mind. The spa follows a similar suit, with a focus on accelerating recovery through tailored treatments. For wellness junkies, there’s a cryotherapy chamber, an infrared sauna and a quantum harmonics restorative experience to try out as well.
More info 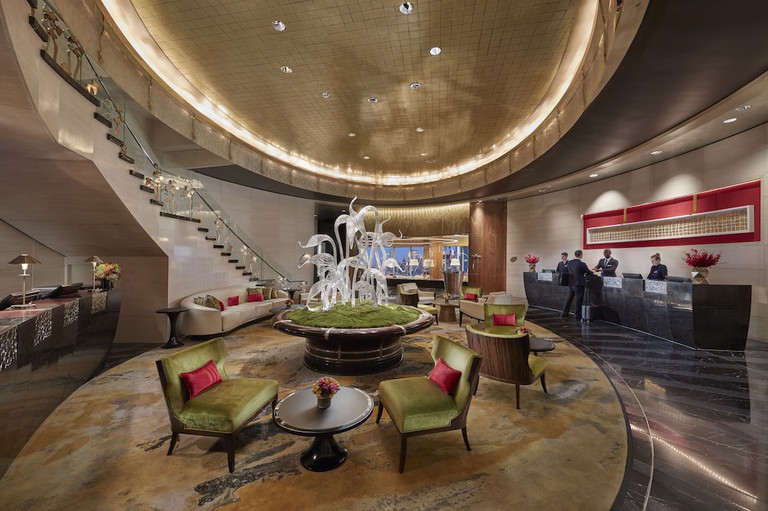 Courtesy of Mandarin Oriental, New York / Expedia
View Rooms
From $805 Per night per room
With Central Park on its doorstep, the Mandarin Oriental offers some of the best views in Manhattan. These are, perhaps, best seen from its sky-high spa. Pools are set to a backdrop of floor-to-ceiling windows, so you can marvel at the vistas. Make a day of it by opting for treatments in the VIP Spa Suite with fireplace, private steam and shower room or the Thai Yoga Suite with its deep soaking tub.
More info 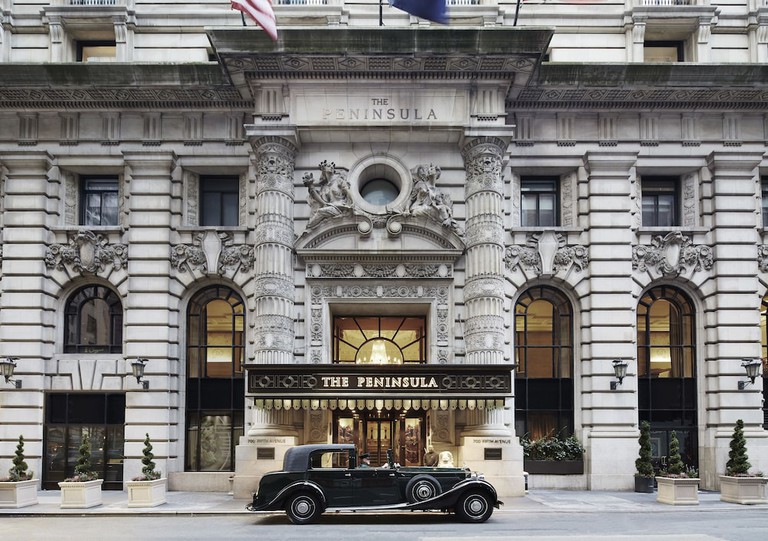 Courtesy of the Peninsula New York / Expedia
View Rooms
From $814 Per night per room
Just steps from Fifth Avenue and the Museum of Modern Art, the Peninsula New York sits behind a Beaux-Arts exterior in a prime position. The spa is expansive, with 10 treatment rooms, a sun terrace, swimming pool, steam room, ice fountain and an “experience” shower. The Escape From the City package is best if you want to completely unwind. It includes a 90-minute facial by French luxury skincare brand, Biologique Recherche, a Himalayan salt scrub and a 90-minute holistic massage.
More info 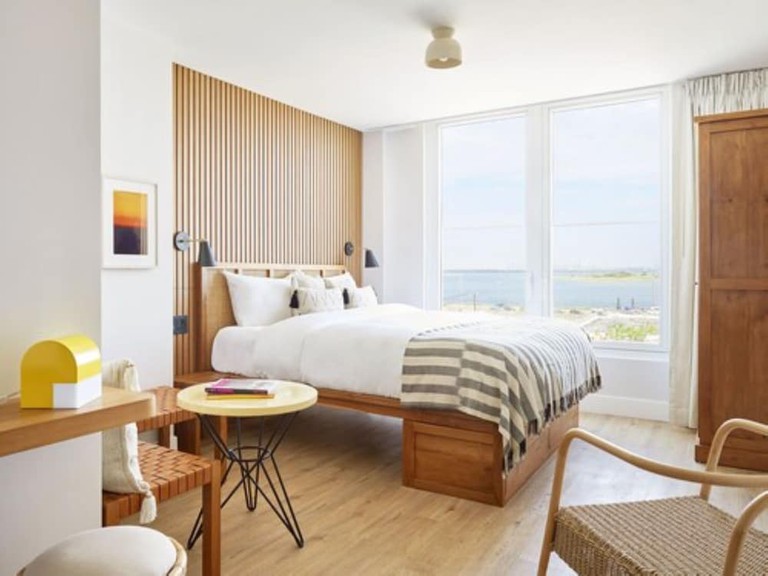 Courtesy of the Rockaway Hotel / Expedia
View Rooms
From $256 Per night per room
One of New York’s most exciting new hotels, the Rockaway sits pretty just moments from Queen’s Rockaway Beach. Unlike its slick counterparts in Manhattan, the Rockaway’s vibe is much more laid-back. Think Scandi-style decor, rattan furniture and soft-pastel hues. While there’s no spa, the large heated pool and sun deck is the summer hotspot, a rooftop restaurant with sweeping city views and it offers daily yoga classes, too.
More info
Give us feedback