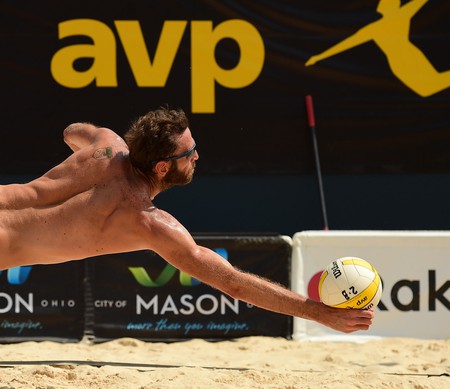 Ryan Doherty reaches into his pocket for his wallet and pulls out a business card. The red card has his name, an image of him shirtless on the beach with a volleyball, the text “Avatar’s Guide to Beach Volleyball available on the Kindle app now”, and three listed professions: pro beach volleyball player, paid underwear model and published author.

There is no email address, phone number or social media handles. Anyone looking to contact Doherty will have to go through the public relations and communications staff at the Association of Volleyball Professionals (AVP). At 7-foot-1, Doherty is a pro beach volleyball player who has obviously dabbled in other ventures away from the sand. 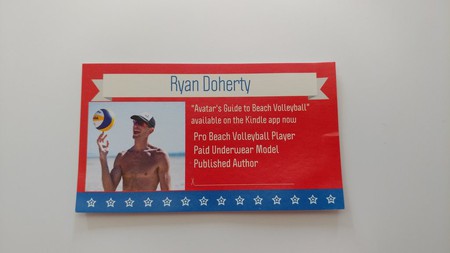 “The thing about beach volleyball is you can’t spend all day doing it,” said Doherty, who was in New York City for the AVP NYC Open from June 8-11. “I don’t have a 9-5 job. I can practice in the morning and make sure I take care of my body and do my conditioning, but there’s a lot of down time.”

Doherty’s road to becoming a professional volleyball player is as colorful as his time has been since joining the tour. Growing up in Toms River, N.J., Doherty played basketball and baseball, focusing solely on the latter by the time he reached his senior year at Toms River High School East. In the summers he’d work for the Jersey Shore Volleyball Association, setting up nets, helping organize events and then taking the nets down again.

“I was around beach volleyball, but I wasn’t really playing,” he said.

Doherty played baseball at the University of Notre Dame, earning All-America honors as a relief pitcher in 2004. He was signed by the Arizona Diamondbacks and spent 2005-07 in the organization’s minor-league system. As the tallest pitcher in Minor League Baseball history, he got released and didn’t garner much interest from other clubs. He joined the River City Rascals of the independent Frontier League located in O’Fallon, Mo., and finished the ’07 season.

“That’s not where I wanted to be; I wanted to be pursuing becoming a major leaguer,” Doherty said. “Playing lower-level baseball where I was wasn’t very interesting to me. After that, I hung it up and decided to try to find something else I wanted to do, and stumbled onto beach volleyball.”

After finishing up the season in Missouri, Doherty returned back east, crashing on a friend’s couch in Hilton Head, S.C. There was a sand volleyball court near the apartment, so Doherty and his friend bought the cheapest volleyball they could find and began playing.

“Every weekend we went and played and got crushed by high school girls and a local DJ who was like 5-foot-5, but we were loving it, we were having a ton of fun,” Doherty said. “For me, it was a new competitive outlet since I lost that ability to compete in baseball.” 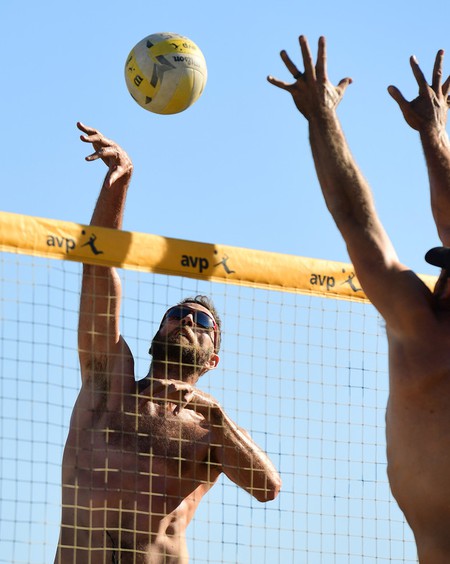 Doherty finished his degree at Notre Dame and moved back to New Jersey. Seemingly at a whim, he packed up his Jeep and drove across the country to Huntington Beach, Calif., in order to pursue a possible volleyball career. He didn’t have a job, or a place to live. He eventually found a job delivering pizzas at night, allowing him to play volleyball during the day.

“Maybe three or four years after that, I won my first tournament, so I quit the job at the pizza place and from then on I’ve just been a professional volleyball player,” he said. “It’s how I pay my rent now.”

Since joining the AVP in 2012, Doherty has won two titles, has seven second-place finishes and eight third-place finishes. He was named the tour’s Best Offensive Player in 2015. Doherty has played internationally with Todd Rogers, John Mayer and Nick Lucena—the duo won silver and bronze on the FIVB World Tour in 2014. Doherty has been to Iran, Switzerland, Rome, Rio de Janeiro and countless other places around the globe because of the sport.

“Before volleyball I never left the country and now I’ve played on four continents and 15 or 16 countries,” he said. “Volleyball’s brought me to a lot of exciting places [where] you get to enjoy and soak up the culture you normally only read about.”

Nicknamed “Avatar” because of his astounding height, Doherty turned those journeys and his experiences as a pro into a blog that became popular in the volleyball community. The tongue-in-cheek writing was fun for him, so he took it one step further by penning an ebook, the aforementioned Avatar’s Guide to Beach Volleyball from his business card.

Volleyball also opened the doors into the world of modeling for Doherty. DiG Magazine wanted to feature him in a lighthearted interview coupled with a full-length photo on its back cover. In an effort to avoid what he deemed a boring photo in a collared shirt, Doherty suggested he pose in his underwear. Coincidentally, he recently met the founder of Wood Underwear at a local tournament, so he reached out, asked how much they would pay ($1,000 by the way) and it came to fruition. Standing in bright orange briefs, Doherty is pictured holding a volleyball in his left hand and is giving the camera a contemplative look, his right hand comfortably under his chin.

“I would have done it for anything,” he said with a laugh. “I’m now a paid underwear model for the rest of my life. It’s the funniest thing I’ll ever do. There’s no coming back from that picture and article. It’s the worst picture, but it was so funny.”

That’s Ryan Doherty. Being an introvert, he may not like city life—he said he heard more car horns in two hours in NYC than in the last year in Southern California—but he knows how to have fun. He also knows hard work pays off, and loves what he does. No matter what it may be.

“Joy is all relative. If you’re having a rough time it means you had good times before,” he said. “It’s an ebb and flow of the universe. For me, I didn’t mind sleeping on couches—I was never really super materialistic—I just wanted to enjoy my life as much as possible and see what I could do with it. To say I knew I’d get here? Of course not, I had no idea.

“When I moved out to California it was because volleyball was fun and I would look forward to it. The fact that I get paid to play now… I think the AVP is kind of a sucker, because I’d play for free.”