Rising From the Ashes: How Cities Are Reborn After Disaster Strikes 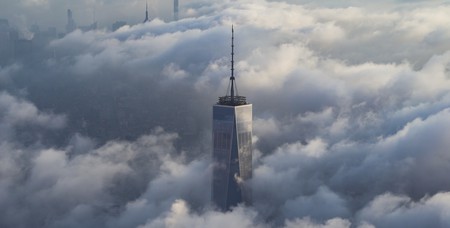 It was impossible for the world to imagine Paris without Notre-Dame Cathedral, with millions watching dumbfounded as its spire toppled into flames. And yet from catastrophe comes opportunity – the iconic building will be resurrected and made “even more beautiful” according to French President Emmanuel Macron. In light of this, we look at how other cities have recently rebuilt their identities in the aftermath of disaster, and how architecture can help a city heal and rediscover its soul.

The architecture of a city determines how its inhabitants go about their daily lives. But some buildings, whether they are glittering skyscrapers or ancient monuments, transcend the everyday. So when disaster strikes, we feel as if the city has lost not just a well-known building but a part of its soul.

There’s no question that the Twin Towers were a symbol of New York. From King Kong to Superman, the 1970s duo played a starring role in numerous movies, immediately transporting viewers to the hustle and bustle of the Big Apple. Built in 1973, the skyscrapers had become a manifestation of the American dream and the pulsating heart of global capitalism. When the horror of the 9/11 attacks unfolded, the impact was on a psychic landmark as well as a physical one. 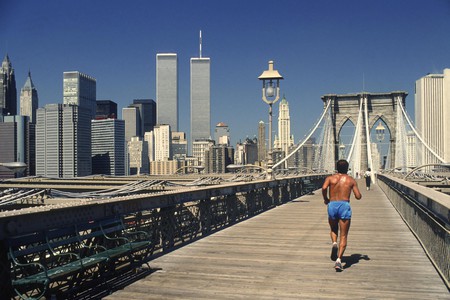 For 13 years, a gaping wound in the city’s skyline served as a reminder of the devastation, but in 2014 the new One World Trade Center (1 WTC) was finally built – a shimmering beacon of fortitude and American grit. While the new building’s glass roof is a poignant visual marker that honours the height of the original towers, the skyscraper’s cherry on the cake is a 124-metre (407-foot) Boudicca-style war chariot spike, defiantly piercing the New York cityscape at 1,776 feet (541 metres). The number of feet is significant, marking the year of the Declaration of Independence and a reminder that no terrorist organisation shall strip the nation of its ‘Life, Liberty and the pursuit of Happiness’.

“There was a void in the skyline – a symbol of the city erased,” says architect Kenneth A Lewis, a managing partner at Skidmore, Owings & Merrill, who was closely involved in the project. “We had to reassert lower Manhattan’s pre-eminence as a business centre and establish a new civic icon for the country. Today, One World Trade Center marks the sky again, and speaks to the ambitions, perseverance and resiliency of New York City. The skyscraper came to represent so much more than a building. It signifies healing. While the adjacent World Trade Center memorial speaks of the past and of remembrance, the tower’s design expresses optimism and hope in New York’s future.” 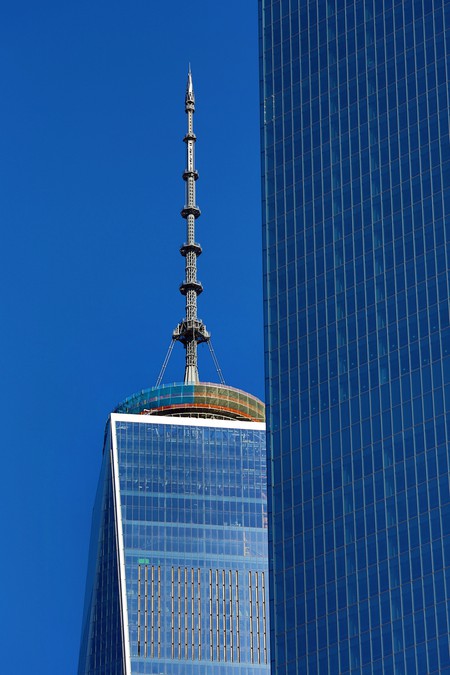 Resurrecting Timbuktu’s mausoleums – a ‘lesson in tolerance … and peace’

Around a decade after the Twin Towers were destroyed, Islamist extremists shook the world again. In 2012, militant group Ansar Dine stormed into Timbuktu in Mali and wrought seemingly irreparable damage to some of the world’s most precious monuments. The attack saw the destruction of 14 sacred mausoleums that symbolised the Islamic Golden Age and were at the centre of Islamic learning. An ancient yet very present part of Malian life, they had been anchors for the Malian people for centuries, from celebrating marriages and Islamic New Year to providing spiritual support through famine and drought.

These buildings were shrines to Timbuktu’s founding fathers, most notably Sid Yahya’s mausoleum. In a symbolic act, its door was ripped off by extremists after centuries of being closed due to a legend stating it shouldn’t be opened until the “end of the world”. The destruction wasn’t just an attack on the rites and rituals of the Malian people; it was retribution for capitalising on the tourist industry and a warning to the international community. The attack made history as the subject of the International Criminal Court’s first ever war-crime trial for the destruction of a cultural monument. It suddenly became a global issue, with the UN rallying around Timbuktu to protect its unique history and heritage and to help rebuild it in the aftermath. 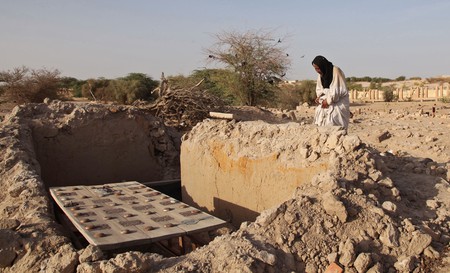 Mohamed Maouloud Ould Mohamed, the care taker of the tomb's at the Timbuktu's mausoleums pray at a damaged tomb's in Timbuktu, Mali. | © Baba Ahmed/AP/REX/Shutterstock

“The important thing was to rebuild identical replicas of what the terrorists destroyed and make a political standpoint by maintaining our World Heritage status and not giving in to the extremists,” says UNESCO’s Gonogo Fidèle Guirou, who was involved in the reconstruction of the mausoleums. With UNESCO funding, local stonemasons embarked on a year-long project in 2014 to painstakingly rebuild the city’s 14 earthen shrines. As with One World Trade Center, reinstating the mausoleums displayed unity and peace in the face of terrorism.

In 2015 a 900-year-old consecration ceremony took place to mark the final stage in the cultural rebirth of Timbuktu. UNESCO’s director-general, Irina Bokova, addressed the people of Mali: “These mausoleums are now once again standing. This is irrefutable proof that unity is possible and peace is even stronger than before. We did it and we can do it again… Your work is a lesson in tolerance, dialogue and peace… it is an answer to all extremists whose echo can be heard well beyond the borders of Mali.” 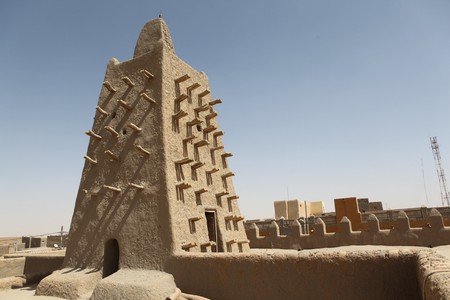 Rebuild or restore? The dilemma of ChristChurch Cathedral

For those left in the wake of the 2011 earthquake that rippled through Christchurch in New Zealand, however, it was a slightly different story. The building at the heart of it all, ChristChurch Cathedral, was left in limbo like a crumbling Gothic ruin – suddenly morphing from a proud historic landmark to a solemn symbol of the city’s new-found vulnerability. Some were desperate to cling to the George Gilbert Scott building, while others found it a painful reminder of disaster. A question mark loomed over its future: Should it be demolished, or should it be restored? The city became simultaneously unified by disaster and divided over how to move forward.

“The solidity of people’s lives was shaken to the core,” recalls local resident Wilma Laryn. “Buildings became emblematic: they needed to be safe, repaired and re-lived in as soon as possible so that people could borrow their solidity and heal the feeling of disruption and uncertainty. In a futuristic landscape of cranes and machinery, contemporary structures were built, often using state-of-the-art earthquake-resistant technology. It was a jump into the future that some rejoiced [in] and some mourned.” 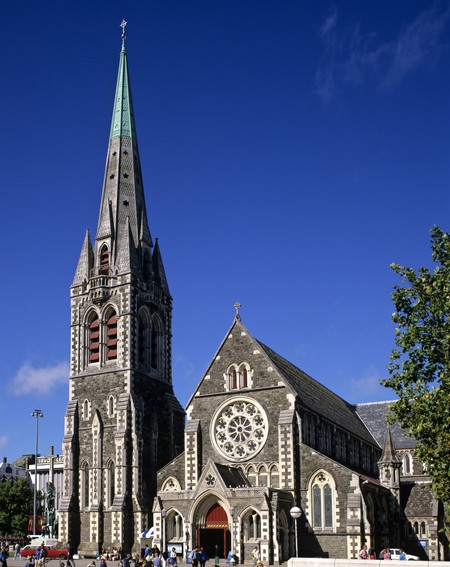 Possibly the most contested new-build in Christchurch was the 2013 Transitional Cathedral, designed by Pritzker Prize-winning Japanese architect Shigeru Ban. The striking A-frame church, made predominantly from cardboard tubes, was meant to be a temporary refuge and civic centre for the city – a symbol of progress and rebirth in the face of catastrophe. Internationally, it’s now become the most recognised building in the country. “Unlike other projects in the city, it was quickly produced, and it was new and exciting, offering a window into future possibilities for the city,” says conservator Carolina Izzo, who was working on the Isaac Theatre Royal at the time. 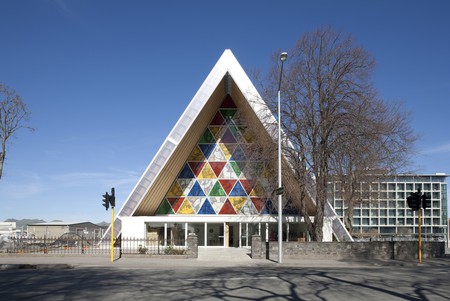 However, many didn’t agree that ‘fast architecture’ was the answer, especially as $5.3 million had been spent on the makeshift church at the expense of restoring the existing cathedral. “The name of the city is ‘Christ-Church’ after all, and the original cathedral has always been an icon of the city,” says Izzo. The solidity of a stone building in a city increasingly made of steel and glass is more important than ever according to Izzo. “Christchurch’s destruction was only partially due to the earthquake,” she adds. “The remaining damage was carried out by a poorly informed government that was eager to be seen taking action, knocking down ‘anything old’ under the banner of ‘health and safety’.”

After a painful, seven-year bureaucratic battle, it was finally agreed that the church would be restored to its former glory in August 2018, but rehabilitation is slow. In the meantime, the Cardboard Cathedral still stands, a half-mast flag to the city’s progress. And yet, just as the community has come to rely on the Cardboard Cathedral, it’s already displaying signs of fragility due to an ongoing battle with water ingress. “This impermanency is a novel concept in planning and design, and is hard to accept,” says Laryn. “There is a sad beauty in tending the flowers of springtime; they won’t last, therefore they are even more beautiful.” 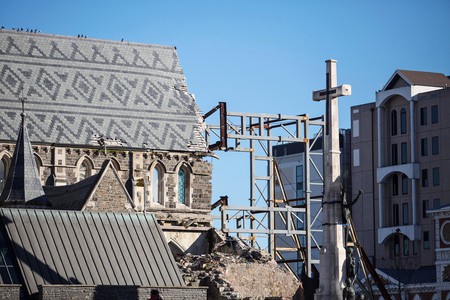 A cross stands next to the Christchurch Cathedral as it undergoes repairs in Christchurch, New Zealand. | © Brendon O'Hagan/Bloomberg via Getty Images