The Tumultuous Life of the Little-Known “Austrian van Gogh” 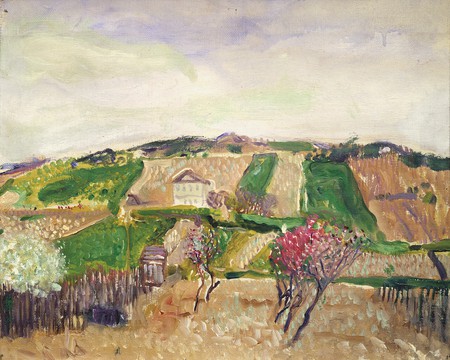 On November 4, 1908, 25-year-old painter Richard Gerstl stripped naked, stabbed himself in the chest, and hanged himself in front of a full-length mirror. His macabre end received no fanfare, and in short order, his oeuvre faded into obscurity. That was until this summer, when the Neue Galerie resurrected Gerstl’s work for an eponymous solo show honoring the ill-fated young man, now considered Austria’s first Expressionist. 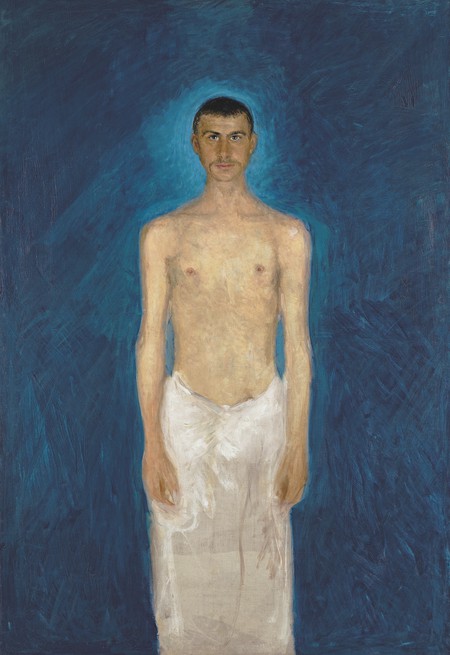 Not much is known about Gerstl’s short life, “but scholarly detectives—notably Raymond Coffer … who collaborated on the Neue Galerie show—have plausibly reconstructed it,” Alex Ross writes in The New Yorker. The artist was purportedly headstrong and rebellious, and harbored contempt for the bourgeois arrogance of his contemporaries.

Ironically, Gerstl was well-suited to turn-of-the-century Vienna. His disdain for convention and innately defiant nature propelled him towards the unorthodox, though his parents’ wealth served as a convenient safeguard. His art was experimental yet timely, his oeuvre characterized by notes of Symbolism, post-impressionism, and a fiery urge for self-exploration. 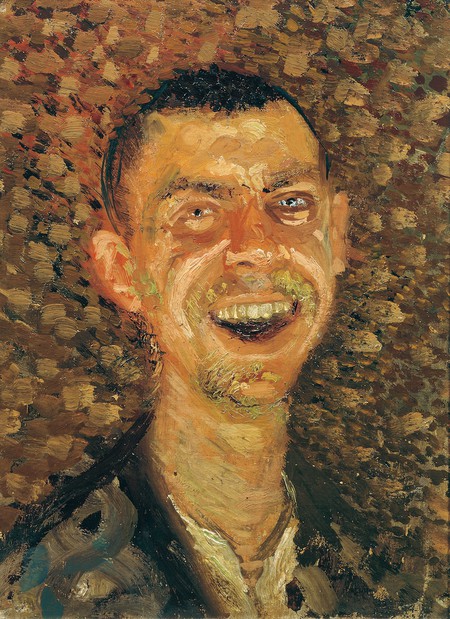 Much like Egon Shiele, Gerstl’s self-portraits portray a shapeshifter. The ebbs and tides of his mental state can be traced rather clearly through his portfolio, which oscillates between a thick-haired, well-dressed, confident society man, and an exposed, unclothed, unsure depressive.

As with so many figures who meet a dramatic end, Gerstl’s demise was prompted by a broken heart. In 1908, he ignited a romantic affair with Mathilde Schoenberg, who was, at the time, married to avant-garde composer Arnold Schoenberg. 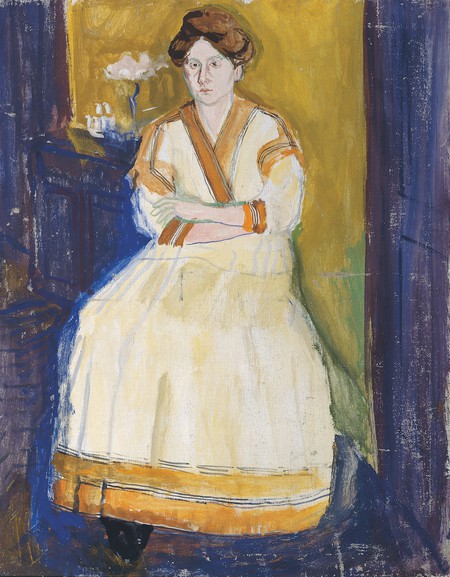 Gerstl met Arnold and Mathilde in the spring of 1906, when they commissioned the young artist to give them painting lessons—partly due to Arnold’s search for an alternative form of income. (A selection of Arnold’s paintings, clearly inspired by Gerstl’s aesthetic, are on view at the Neue Galerie).

Over time, Gerstl earned the couple’s trust—particularly Arnold’s—and would accompany Mathilde to cultural events in her husband’s absence. The three became close friends, which held particular significance for Gerstl, whose extreme sensitivity and notoriously short fuse led to his alienation from Vienna’s tightly knit circle of artists. But in 1908, while the three summered together in the country, Gerstl’s relationship with Mathilde transitioned into a destructive affair.

Gerstl’s work became notably radical. His canvases are thick with smeared blobs of paint; faces are blurred; backgrounds are distilled into abstract chaos. His work is no longer figurative as it was but pioneers a revolutionary aesthetic adapted by artists to come, such as Edvard Munch and, later, Willem de Kooning. His work from this summer can be seen as both deranged and free. 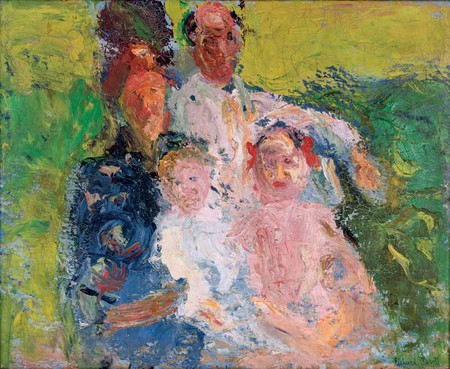 Arnold Schoenberg was experiencing a simultaneous streak of inspiration as he worked through his Second String Quartet. Shortly after the atonal masterpiece was completed, he walked in on Gerstl with his wife, who then briefly ran off with her young lover.

Schoenberg, who was known to suffer from psychological instability himself, was devastated. “I have only one hope—that I will not live much longer,” he wrote in a letter to Mathilde. And in his last will and testament he states: “[I] have had ideas of suicide and almost carried them out, have plunged from one madness into another—in a word, I am totally broken.”

But Gerstl proved most fragile of the two when Mathilde returned to her husband soon after. Not only did the artist lose Mathilde, he lost a friend and key support system in Arnold, who subsequently cut Gerstl off from his entire social circle. Isolated and shattered beyond repair, Gerstl destroyed an untold portion of his work before committing suicide on the day of a concert given by Arnold’s students. 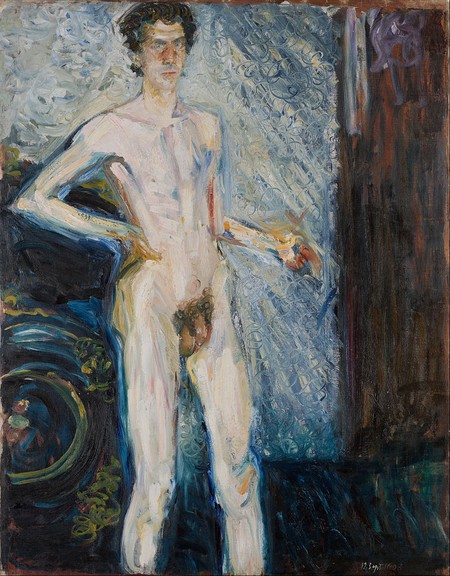 The artist executed his final self-portrait (above) on September 12, 1908. Nude Self-Portrait with Palette depicts an unsettlingly expressionless Gerstl holding an intense, manic stare laced with quiet self-hatred. Rich blue tones offset his pallid skin, and his eerie disproportion suggests a man on the verge of derailing.

Richard Gerstl never exhibited a painting during his lifetime. His family, shamed by the scandal of his suicide, covered up the cause of death. What remained of his belongings were stored away until 1931, when the artist’s brother Alois brought two small paintings to Otto Kallir, an art dealer who specialized in Vienna Secession and, later, Expressionist artworks. 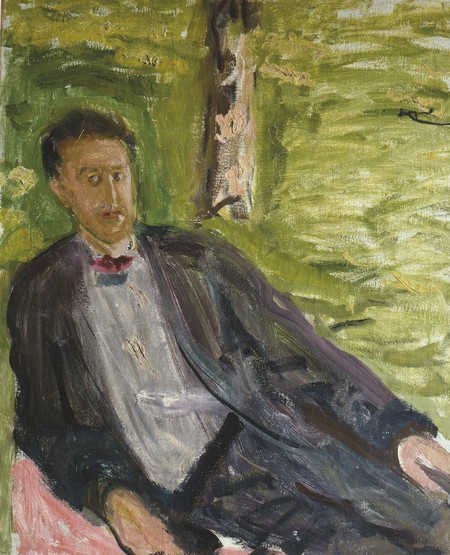 Alois nearly threw his late brother’s paintings away before bringing them to Kallir, who was so deeply moved by Gerstl’s work that he held a comprehensive exhibition of the pieces that were left. Critics hailed Richard Gerstl the “Austrian van Gogh,” and he was posthumously credited as the first Austrian Expressionist for his brilliant, tortured works.

Well over 100 years after Gerstl’s tragic suicide, the Neue Galerie hosts the artist’s first show in the United States.

Richard Gerstl is currently on view at the Neue Galerie, and will run through September 25, 2017.