Republic of Booza Puts on a Show With Stretchy Ice Cream 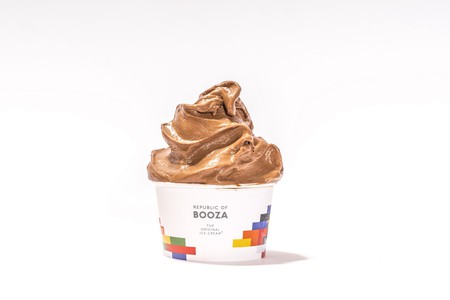 The chocolate booza is dense yet milky | © Noah Fecks

Leaking cones of ice cream and neon-hued popsicles are among the warm-weather sweets we cherish during the summer months. Yet in a city so steeped in ice-cream parlors, there’s nothing quite like Republic of Booza, Brooklyn’s newest scoop shop.

Located in Williamsburg, Brooklyn, Republic of Booza specializes in the eponymous booza, an ice cream with Middle Eastern origins. But booza is unlike traditional American ice cream or its Italian gelato counterpart.

“Booza has no air whipped into it, so we like saying it’s like gelato on steroids,” co-founder Michael Sadler says.

It’s stretchy like a rubber band—without the sudden bounce back. Scoopers gracefully push at the ice cream to demonstrate its elasticity, tugging long ribbons of the stuff in a feat of gymnastics. But despite its malleable form, booza is still reminiscent of the feel—and taste—of regular ice cream.

At the helm of the operation are four friends: Sadler, Tamer Rabbani, Jilbert El-Zmetr, and Mohammed Makki. Sadler and Rabbani met while in graduate school, and Rabbani brought Makki and El-Zmetr on board—the former a childhood friend and the latter a booza entrepreneur from Australia.

“Each of us had encountered booza at one point or another and fell in love with its ultra-smooth, creamy consistency, which we thought would make it an ideal vehicle for flavors far and wide, beyond the traditional range in which it’s been served,” Sadler says.

Booza was reportedly developed as the first iteration of ice cream over 500 years ago in the Mediterranean region called the Levant (which today would be several Middle Eastern countries as well as parts of North Africa and Europe). The unique, supple consistency is derived from the combination of two hyper-regional ingredients: sahlab (ground orchid root) and mastic (a tree bark resin). Milk is then added to this mixture, transferred to a freezer drum, pounded with a three-foot-long wooden mallet, and finally stretched by hand. The ultimate product is creamy, bendable, and dense; stationed in the case, each flavor looks like it’s been folded in on itself.

They're not kidding when they say booza stretches. | © Republic of Booza

“Looks can be deceiving,” Sadler says. “The soft elasticity translates into creaminess—not chewiness—on the palate.”

Because of this unique density, booza packs tons more flavor per scoop than a pint you’d normally find in the supermarket. If you were to stumble upon booza in the Middle East, though, you’d probably only find it in one flavor: qashta (candied cream). Occasionally it’ll pop up in other regional flavors like pistachio and rose.

Republic of Booza, however, leans toward a mix of cheeky flavors, along with a few Middle Eastern ones. The menu is split into three sections: classic, global, and experimental. The classic options boast your run-of-the-mill American flavors, including chocolate, pistachio, strawberry, salted caramel, and blackberry, while the global flavors take inspiration from around the world. There’s the aforementioned qashta, swirled with bits of pistachios, and a subtle cinnamon-based horchata de chufa. But the experimental is where things get interesting. The salted Oreo is flecked with chunks of Oreo cookies; mint tahini chip, sprinkled with mini chocolate chips, leaves your taste buds wonderfully confused, a constant switch of mint and tahini; and the Bloody Mary sorbet harks back to Sunday brunch and sautéed tomatoes. 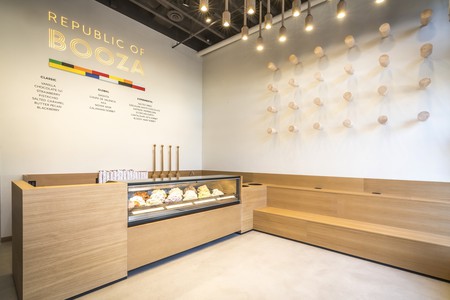 The sleek shop is located in Williamsburg, Brooklyn. | © Noah Fecks

“We do not consider ourselves an ethnic brand with a regional product, but a cosmopolitan brand with an authentic product—namely, a modernized version of the original ice cream,” Sadler says.

Here, you can simply come in for an ice cream, but you’ll leave having seen a show, one where scoopers shimmy alongside the bends and bows of the booza.