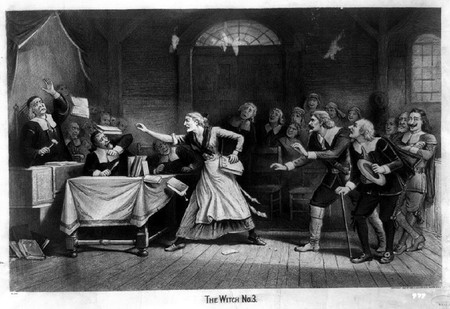 On Thursday, June 15, Christie’s will auction off an incredibly rare manuscript from the 1692 Salem Witch Trials that ultimately led to poor, elderly widow Margaret Scott’s death.

In chilling detail, teenage Puritan Mary Daniel recounts the details of her nightly torment at the hands of 76 year-old accused witch, Margaret Scott:

“I was taken very ill again all over & felt a great pricking in ye soles of my feet, and after a while I saw apparently the shape of Margret Scott, who, as I was sitting in a chair by ye fire pulled me with ye chair, down backward to ye ground, and tormented and pinched me very much, and I saw her go away at ye door, in which fit I was dumb and so continued till ye next morning, finding a great load and heaviness upon my tongue….” 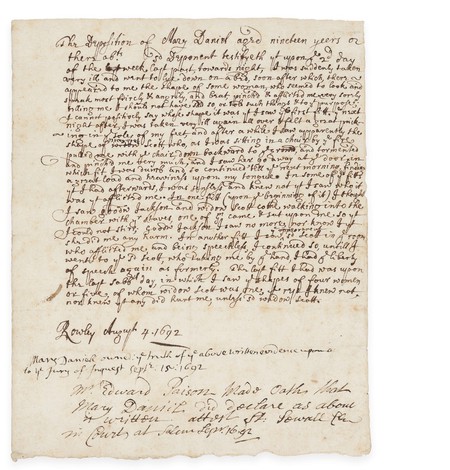 A poor widow who, according to Christie’s, suffered the loss of several young children (likely due to disease), Margaret Scott (1616-1692) of Rowley, Massachusetts was an easy target during the Salem Witch Trials. “She had long been the subject of rumors in her community and was exceedingly vulnerable when the witch hunts began,” the auction house explains. Scott’s accuser, Mary Daniels, is an elusive historical figure; not much is known about her life, other than her conversion to Puritanism just before the deposition in 1691. 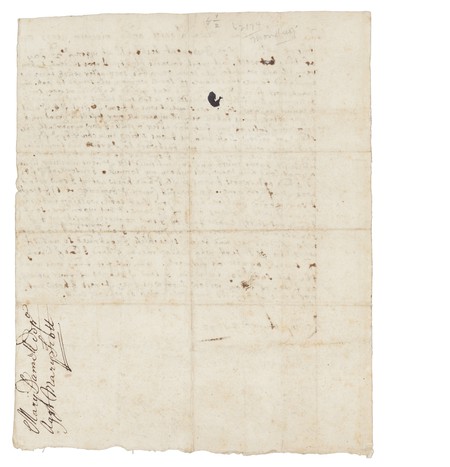 Dated August 4, 1692 and signed by Salem Court clerk Stephen Sewall (1657-1725), this manuscript was used as official evidence the following month and led to the September 22, 1692 execution of Margaret Scott at Gallows Hill. “Extremely little original material from the 1692 Salem Witch Trials survives in private hands,” says Christie’s of the document, “and the present is a quintessential example.”

The manuscript, estimated at USD$50,000 to $80,000, is part of Christie’s Fine Printed Books & Manuscripts Including Americana and the Eric C. Caren Collection auction on June 15 in Rockefeller Center, and will be presented alongside a selection of historic news clippings, maps, photographs, and artifacts.