NFL Experience Times Square Brings the Game to the Fans 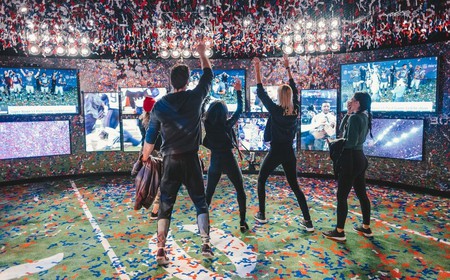 Watching a football game is one thing—experiencing it firsthand is another.

NFL Experience Times Square is a one-of-a-kind attraction in the heart of New York City that brings football fans closer to the players, teams, and the sport they love through technology, interactive games, and content. The facility, located on the corner of West 47th Street and 7th Avenue in Times Square, is a collaborative effort between Cirque du Soleil Entertainment Group and the National Football League (NFL).

Opened in November 2017, the live-action attraction lets fans of all ages experience every aspect of the NFL. Test your strength against blocking dummies and brag about your vertical leap in The Equipment Room, or become the quarterback in the Huddle Up experience and execute a play. Arm strength and pass accuracy are on display in the Quarterback Challenge, while The Stadium’s bone-crushing hits, stadium atmosphere, and varying weather elements are projected in 4D with the theater’s wrap-around projection broadcasting footage from NFL Films. Finally, feel like you’re part of the biggest game in football during the Super Bowl Celebration, where you’ll be showered in confetti after winning the Vince Lombardi Trophy. Watch out for the Gatorade bath, too. 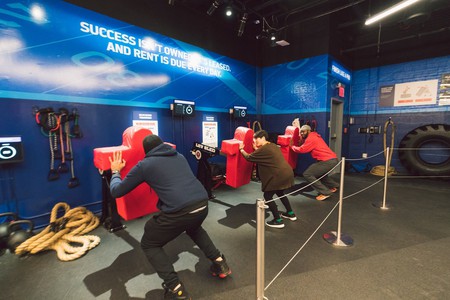 “NFL Experience Times Square takes fans on a journey through the NFL, combining ultra-high-tech interactive stations with emotion-inducing memorabilia and a behind-the-scenes look at what really happens inside a training facility,” says Matthew Hamel, director of creative at the NFL Experience Times Square. “Visiting coaches and players alike have marveled in the closeness they’ve felt to the game when viewing real footage from inside the locker rooms or watching a kid throw a pass to their favorite digital receiver.”

Not only do visitors to NFL Experience Times Square get to live out their fantasies and dreams as NFL players and relive the glory days of their favorite franchise, they also get to experience every NFL stadium without having to leave the Big Apple. NFL Experience Times Square offers food from all 31 NFL stadiums through a curated menu of locally sourced ingredients from each NFL hometown, and input from each team’s head chef.

“Since day one, we’ve seen an incredible, positive reaction from fans through word of mouth and reviews on social media,” Hamel says. “We’re amped to celebrate our first summer as the number one destination for football fans from our home in Times Square.”