New Yorkers Are Lining up for These Giant Soup Dumplings 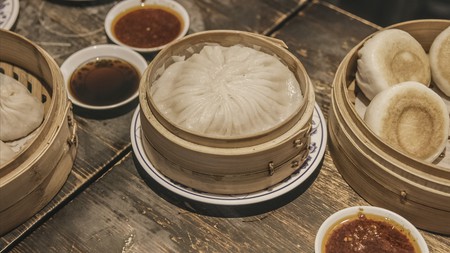 New York City is home to countless food superlatives, so it should come as no surprise that it’s where you can now find the largest soup dumpling you’ll ever lay eyes on.

Since Drunken Dumpling opened in the East Village this past autumn, diners have been flocking in droves to try its extra-large xiao long bao. Even Questlove, the musician and notorious foodie, is a fan.

This is what everyone in NYC should be doing on a ❄️snow day❄️ XL soup dumplings that are served with a straw, and in some cases 3 straws, at @drukendumpling #questlovesfood #LABound 🎥 by @krieber_

Xiao long bao, or soup dumplings, are a traditional Chinese specialty in which a meat-based filling and liquid broth are encased in a thin wrapper. The massive version served at Drunken Dumpling is large enough to fill an entire steamer basket, and easily feeds two.

The XL XLBs are filled with a mix of scallops, shrimp, crab, and pork, in a combination of chicken, vegetable, and pork broth. To eat one, you first puncture the wrapper with a straw to suck out the broth, then tear into it with chopsticks to get to the meaty fillings.

Owner Yuan Lee’s mother, Qihui Guan, heads up the kitchen and comes with serious dumpling credentials, having previously worked at Joe’s Shanghai, also known for its (more modestly sized) soup dumplings. She makes a limited number of her XL version each day, so it’s best to get in line early to make sure you get one!