Given the time it takes to complete a script, playwrights are seldom first responders to a political upheaval. Yet Donald Trump’s Presidency has still been greeted by some broadsides from on and off Broadway.

It’s currently impossible to escape hearing the words ‘Donald Trump’ on an hourly basis—the President is entrenched in the headlines and ubiquitous on media platforms. But there is at least one place where his name is not permitted: the rehearsal room for the Broadway production of Oslo, which opens today.

Director Bart Sher has forbidden mention of the President’s name while the cast of J. T. Rogers’ play enacts the behind-the-scene actions leading to the 1993 Oslo Accords between Israel and the Palestine Liberation Organization. Nonetheless, the restriction, much like Trump’s travel ban, has proven unsuccessful. 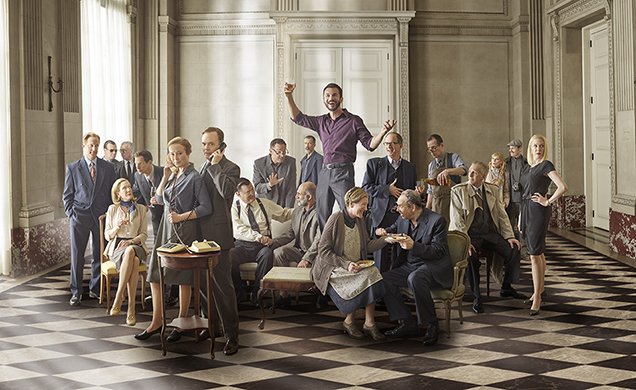 ‘He’s so bad at it!’ a laughing Rogers said of Sher’s banning of Trump’s name. ‘Our hope was to never to speak about it, and that’s not possible. But the premise for all of us, which I think is very useful, is we’re not talking about Trump in terms of, “Oh, that bastard.”‘

Rogers then asked the rhetorical question that the Oslo cast has been permitted: ‘What sort of chaotic, ruthless business transactional moment that we’re all living through – [Trump’s] m.o. – is also in this play?’

As for the New York theater community, it’s m.o. has never been more clear, thanks to the timely political dramas that have opened in New York since Trump’s election on November 8. Works like Oslo, Bryna Turner’s Bull in a China Shop, and Paula Vogel’s Indecent were scheduled and announced before the election, but their relevance is undeniable.

Oslo, which explores personal as well as political narratives, is the first of Rogers’ plays to be produced on Broadway. It’s not his first foray into politics. His Blood and Gifts, performed at Lincoln Center in 2011, explored the history of America’s involvement in Afghanistan. Politics has always been a part of Rogers’ mindset. As the son of a political scientist, he learned about current events during his family’s dinner table conversations.

It seems almost inevitable that Rogers would make his Broadway debut shortly after the election of the most controversial leader in recent American history.

‘It feels like we’re [living] in a time warp, [like] in the ’80s and ’90s,” the playwright said. “We’re having the same fights in only slightly different language.’

Political arguments are exactly what Oslo trades in. The play dramatizes Israel and the PLO’s fiercely debated political negotiations, the fraught attempt of two polarized entities to converse with each other. The conversations drove Rogers to write the play, which required him to imagine people forced to recognize the humanity of their sworn enemies.

Oslo wasn’t intended as a history lesson, or a political tract. Much of the three-hour drama is staged in a tastefully decorated secret meeting place, where the food is superb, the drinks are flowing, and tensions are high.

‘Yes, it’s about political struggles in the Middle East in the ’90s,’ Rogers said. ‘But it’s really about how do you sit in the room with people you violently disagree with and hear what they’re saying, and find some tiny thing you can agree on and move forward without demonizing each other? That seems to be super-relevant.’

The ability to converse has never been more urgent, Rogers said. Though he doesn’t consider himself a political playwright, he agreed Oslo feels more timely than ever. ‘We’re rehearsing it now, and there’s this entirely new level of resonance I could never have foreseen when writing the play,’ he said.

Sher says the play ‘is about impossible forces who do not know how to talk to each other finding a way to sit in a room and come into some kind of conversation. You couldn’t have two people who hate each other more and find common ground. You actively get to see them work out a problem. That, to me, is much more applicable than it was when we did it six months ago. If there’s any genuine issue in the United States, it’s the inability to genuinely find a way to have a conversation that can find compromise.’

The Tony-winning director emphasized that the play focuses on the 1993 events. ‘I don’t want to feel myself as a reactionary force,’ he added. ‘I want to feel [I’ve taken] a thorough and thought-through approach. Whichever show I’m doing, I’m searching for its immediate significance in the moment that I’m doing it.’

Whereas the political action of Oslo takes place behind closed doors, the forces driving Bull In a China Shop are unapologetically out in the open. When Jeanette Marks asks Mary Woolley, ‘You want a revolution?,’ Woolley responds matter-of-factly, ‘I am a revolution.’

Bryna Turner’s play, which concluded its Off-Broadway run at Lincoln Center on April 2, dramatizes episodes from Woolley’s 1900-37 presidency of the women’s college Mount Holyoke in South Hadley, Massachusetts. It depicts how Woolley strove passionately to achieve sexual equality. Disregarding social conventions, she lived openly with her female lover Marks, a teacher at Holyoke. Her alleged favoritism toward Marks provoked resentment in their academic circle.

Directed by a woman, Lee Sunday Evans, as well as written by one, and featuring an all-female, racially blind cast, Bull in a China Shop has made a powerful statement about women’s place in the commercial theater industry. The fact that Woolley was replaced by Mount Holyoke’s first male president has its echoes, too. Despite being written before the election, the parallels between Woolley and Hillary Clinton are easy to spot.

‘We all thought the election was going to go a different way,’ said Evans. ‘Once it happened, clearly the play felt enormously different. It certainly affected the rehearsal room. The actors and Bryna and I were all coming in every day with the sense of, “Oh my gosh, this just happened out in the world, and it makes this scene feel really different.”‘

Turner’s script, which only mentions Woolley and Marks by their last names, depicts their physical relationship frankly, a deliberate decision made by Evans. She also showed how women’s layered, constricting clothing symbolized the restrictions placed on them in Woolley’s day. 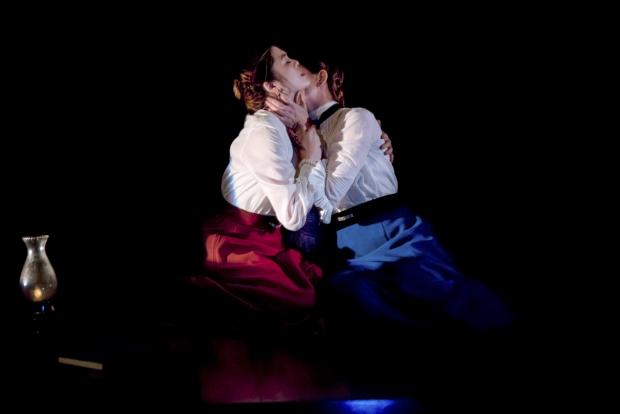 Despite having served the college for 37 years, Woolley was not prominently featured in the college’s history in the years after her retirement. Evans said she ‘was very deliberately written out of Holoyke’s history. They tried to put her story under lock and key.’

Reclaiming Woolley’s history, Evans added, ‘is really powerful. This play gives a voice to people who are often disenfranchised, and at the same time it illuminates the obstacles that they’re up against in the world.’

The disenfranchised are also centerstage in playwright Paula Vogel and director Rebecca Taichman’s Indecent, which opens at the Cort Theatre on April 18. It chronicles the controversial staging of Sholem Asch’s Yiddish play The God of Vengeance at the Apollo Theater in 1923. Though the lesbian scene written by Asch was almost entirely cut from the Apollo production, it still led to the arrests of the show’s producer and cast on charges of obscenity. 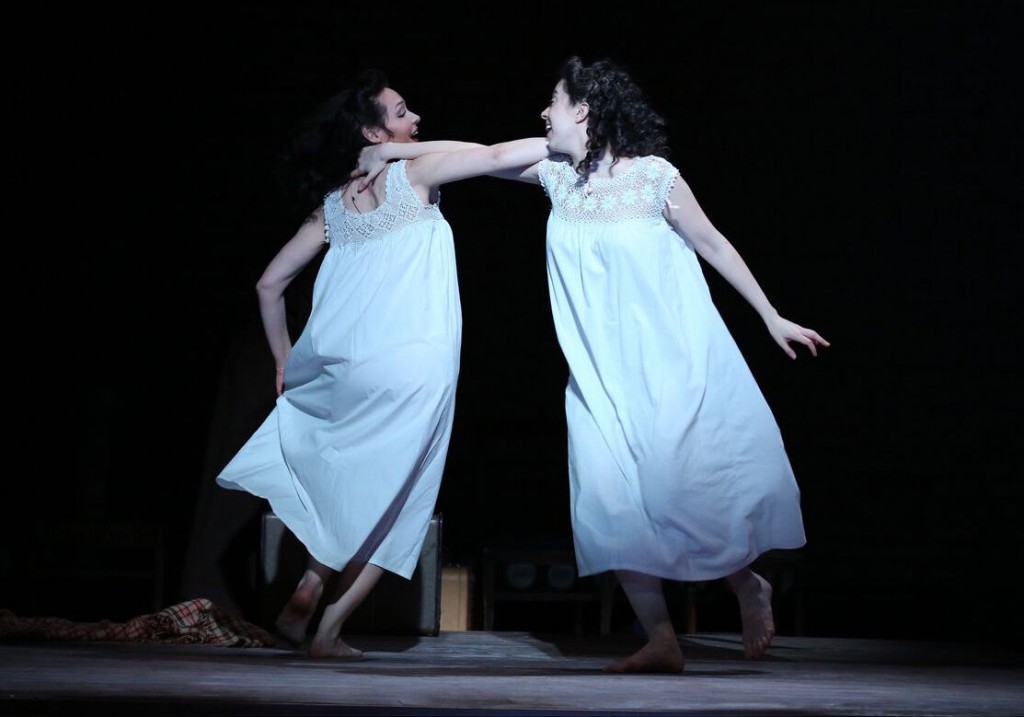 Indecent, named for the condemnation of the play in 1923, unfolds the legal drama and explores the personal lives of members of the acting company that performed Asch’s play.

Following its 2016 run at the Vineyard Theater, Indecent’s Broadway transfer was announced long before November 8. During that time, Vogel had anticipated that she’d be making her Broadway debut under different circumstances.

‘I thought two glass ceilings were going to be shattered,’ Vogel said. ‘One would be my own personal glass ceiling and the other would be the glass ceiling of the first woman President. I absolutely thought that. We were performing all through the country—and we felt that. It was an assumption.’

The morning after the election, Vogel’s agent called her and asked, ‘How does it feel to have written the most relevant play in America?’ Given Trump’s noted lack of condemnation of anti-Semitic incidents in America, there’s a poignancy in Indecent‘s opening at the Cort, where The Diary of Anne Frank first played in 1955.

‘One of the things we want is to come into the theater and look at an American journey,’ Vogel added. ‘It’s about coalescing. We’re not going to let what happened in the 1920s happen again. We can’t.’

Mounting Indecent on Broadway is itself a political statement, since new plays are rarely granted Broadway exposure, especially political plays written by women. As it happens, another one, Lynn Nottage’s Sweat, opened at Studio 54 on March 26. Vogel said she had been ‘gritting her teeth’ the longer Nottage’s Broadway debut was delayed.

‘There’s no way in hell that woman should have waited until she was 52 to [have one of her plays] done on Broadway,’ Vogel said of Nottage. ‘If you look at the large stages and small stages in theater companies’ lives – the women are put on the smaller stages. That means in terms of every dollar of royalty men are getting, we’re getting less than 72 cents. Less than 50 cents. We are very much put in the back room or we’re put on the back burner theatrically while younger men are given a visibility that allows them to write musicals and films and all the opportunities that make more money.’ 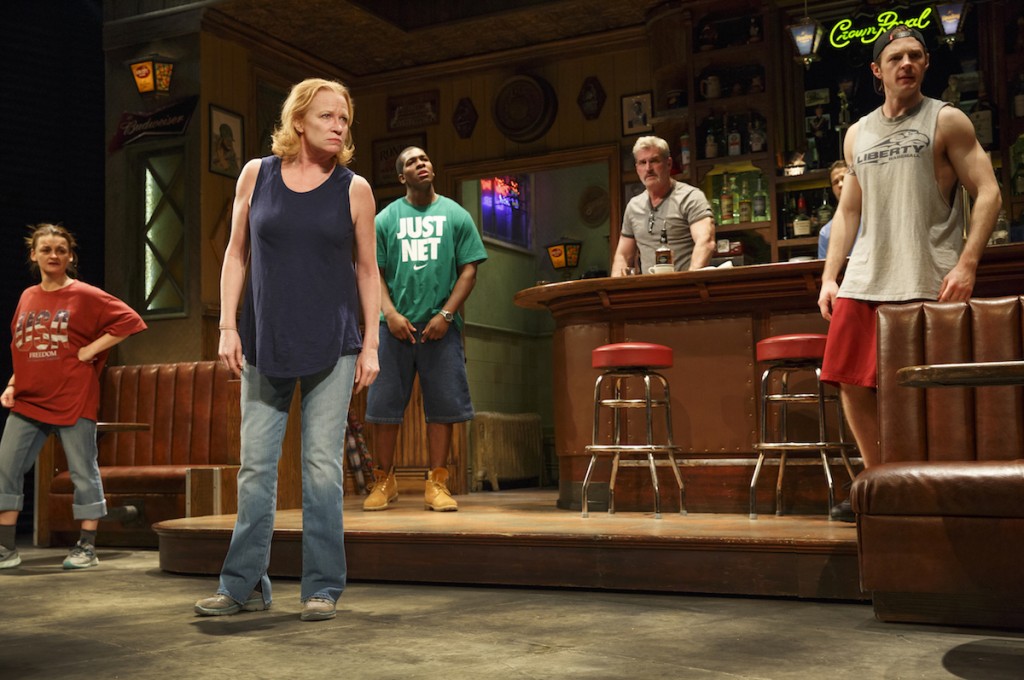 Vogel, who in the past has addressed sexual abuse, AIDs, and prostitution in her writing, is one of America’s most daringly political playwrights. When asked if she has fears concerning censorship of her work, she unhesitatingly replied ‘yes.’

‘The censorship is already there,’ she said, explaining that it occurs through ‘the elimination of writers of color and women, in terms of how many plays get through. We’re swimming upstream, so that’s a benign censorship. I’m aware that the clock is ticking. We’ve been sliding backwards since the election.’

The threats facing the National Endowment for the Arts only increases the urgent need for timely, topical work, Vogel said.

‘If they take away the National Endowment for the Arts, there’s going to be an entire argument made on utter statistical nonsense that only men sell tickets and there has to be a free market economy,’ she continued. ‘That’s always been total and absolute bull. It’s a made-up statistic. We’re just going to be given permission to slide back to the 1950s. Then they’ll say, “You know what? We don’t have to produce people of color. We don’t have to produce women. We don’t have to look for roles for middle- aged women.” We’re going to slide into a Hollywood mentality, though right now there is some resistance to that mentality.’

If New York’s Spring 2017 theater lineup is any indication, Evans is correct.