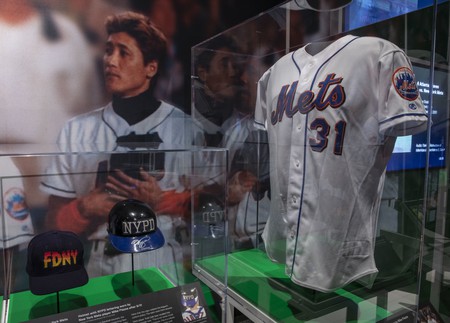 Comeback Season: Sports After 9/11 is a special exhibition at the 9/11 Memorial Museum in New York City. On view through summer 2019, Comeback Season shows visitors how sports helped inspire and heal a grieving nation after the September 11 attacks.

Former United Nations Secretary-General Kofi Annan was fond of sports and the uniting power they had, saying in 2004: “Sport is a universal language. At its best it can bring people together, no matter what their origin, background, religious beliefs or economic status.”

The strength of sports was on display following the September 11, 2001 attacks that devastated the United States. Comeback Season: Sports After 9/11 is an exhibition at the 9/11 Memorial Museum in New York City that showcases just that.

Told through nine chapters utilizing archival footage and testimonials from athletes, coaches and 9/11 families, the exhibition highlights various sports including hockey, football, NASCAR, basketball, the New York City Marathon and 2002 Winter Olympics. The narrative begins with the US Open final between Venus and Serena Williams the weekend before the attacks and moves through the cancellation of events, including the first stoppage in Major League Baseball since the death of President Franklin Roosevelt in 1945. 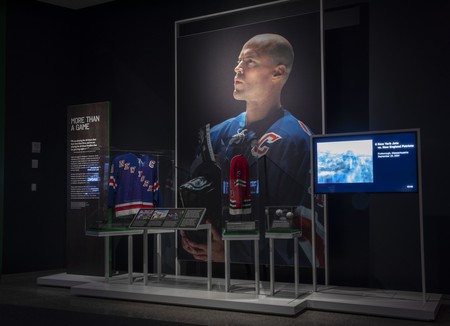 “Through the lens of sports, this exhibition celebrates the strength of the human spirit and our capacity to come together and support one another through unimaginable grief,” 9/11 Memorial & Museum President Alice M. Greenwald said in a statement. “This story provides additional points of entry into the complex story of 9/11, to better understand our history and the impact it had on our world today, to reflect on our own lived memories from that time, and to feel inspired by stories about the best of humanity.”

“In that first game back, the home team came back and won,” says Mets catcher Mike Piazza, whose two-run home run in the eighth inning completed the comeback. “That’s exactly the lesson the city, the country and the world needed to see that night. You can never count out New York.”

New York City sports teams honored the victims and first responders from 9/11 through player appearances and FDNY or NYPD patches on their uniforms. Piazza’s jersey and batting helmet with “NYPD” taped on the back, as well as teammate John Franco’s FDNY hat are on display in the exhibition. New York Rangers Mike Richter, Mark Messier and Eric Lindros are pictured during a visit to thank first responders and rescue workers at Ground Zero on September 16.

The 2001 World Series between the New York Yankees and Arizona Diamondbacks is also showcased as part of the “Home Field” narrative in the exhibition. President George W. Bush threw out of the ceremonial first pitch of Game 3 at Yankee Stadium as chants of “USA! USA!” rang out from the rafters.

The exhibition concludes with the 2001 New York City Marathon as more than 30,000 participants were cheered on by more than two million spectators.