Bronx-based African-American artist Glenn Ligon is known for bringing various styles of art to New York City’s intellectual masses, particularly well-known for his works surrounding issues of race, language, sexuality, personal being, and desire. Born in 1960, Ligon has dedicated his life to improving both himself and his works. We take a closer look at the latter. 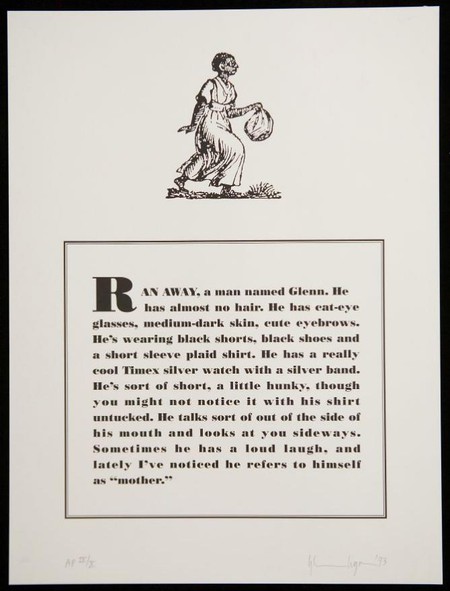 A highly conceptual artist, Glenn Ligon’s work primarily depicts important figures in African-American history and influential speeches. His piece titled Runaways (1993) is initially reminiscent of the kind of early-19th century runaway slave poster that would have been common in the Confederate states. Yet instead of describing the runaway, Glenn focuses on the subject’s attire; high-end clothing, jewelry, and accessories, as well as his personality and soft-spoken voice, all the while retaining a font that is nearly identical to early 19th century lettering. 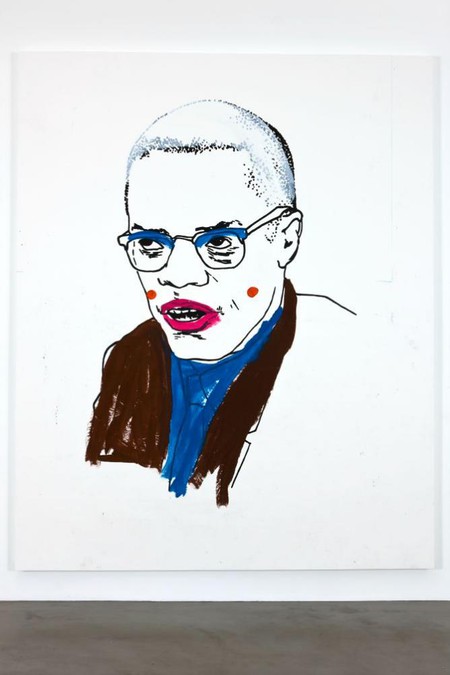 Another iconic piece is Untitled (Malcolm X), done with pencil and acrylic flashe on paper, mounted on a panel. The painting depicts Malcolm X, one of the most important and iconic figures in African-American history, but takes on a comedic tone as bright colors cloud his face, resembling a style reminiscent of mid-20th century cosmetics. 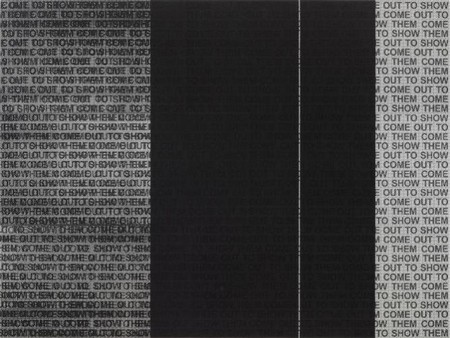 One of Ligon’s most unique artistic features is his use of silkscreen on canvas. For example, Come Out Study #2 (2014), depicts the phrase ‘come out and show them’ many times, often overlapping. The result is a powerful piece in which there are light and free areas alongside dark and constricted sections, creating a space where light and darkness melt into one another. 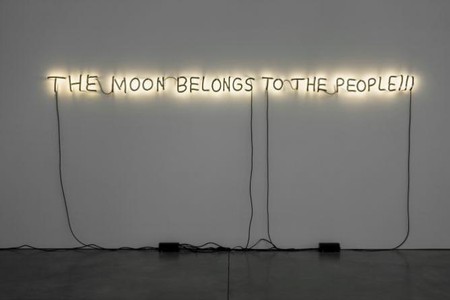 One of the works exhibited in his Neon exhibition, titled Around 1970 or 1971 (2007), depicts the phrase ‘the moon belongs to the people.’ The neon was painted to give it a both a light and dark variation in one piece. Another work, Palindrome #1 (2007), marks the phrase ‘face me I face you’; a powerful commentary on modern-day issues of race, power and authority.

Another notable piece in Ligon’s Neon exhibition was Untitled (If I Can’t Have Love, I’ll Take Sunshine), which displays the phrase ‘If I can’t have love, I’ll take sunshine.’ What makes Ligon’s work unique is the neon itself, which uses a script font. It is pointed yet personal, exuding an air of dignity, respect, and powerful defiance. The bright colors illuminating the walls and lettering show the strength of the person proclaiming this quote, emphasizing the artist’s optimism as well as his recognition of reality. One of New York City’s most powerful contemporary artists, Glenn Ligon is certainly one to look out for.

After graduating with a Bachelors of Arts in History, Nick’s new goal is to explore the world around him through new experiences, tastes and the arts. In his spare time, Nick spends most of his day writing three different comics, playing Smash Bros. with his friends, and exploring the indie scene.