As we vault ourselves further into the modern world, it is important to reflect on the art and culture of a people who stem from an America before our time. Native American history is a reflection of personal, ethical, and social struggles. In honor of the Seneca Art and Culture Center on the once-destroyed Ganondagan State Historical Site in Victor, New York, here are 13 Native American artists you should know. 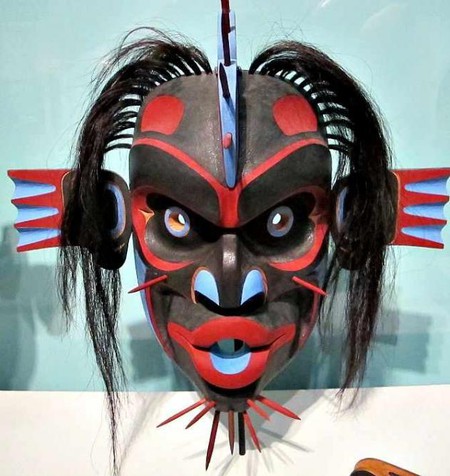 Recognized by the age of 20 as one of the finest Hopi potters, Nampeyo (‘snake that does not bite’) perfected the craft learned by her grandmother by using recycled potsherds as a base material. Her finely constructed pottery exhibited a style, precision, and durability few can re-create. Nampeyo is well-known for designs featuring a technique known as polychrome, which is the use of many bright vibrant colors like reds, browns, yellows, and deep blacks, painted on with a chewed yucca leaf. Her pottery had an intricate and natural motif using geometric figures combined with pictures of animals and faces, then immortalized by using a firing technique which dates back to the 15th century.

Ernie Pepion’s personal story and his triumph over adversity is at least as magnificent as his art. As a member of the Blackfeet Tribe, Ernie Pepion spent most of his life as a rancher and a rodeo rider. He served several tours of duty in Vietnam, but unfortunately in 1971 he was involved in a serious car wreck, which relegated him to a wheelchair as a quadriplegic. While recovering in a hospital he was taught to paint by another patient using a motorized easel and a brace for his hand and forearm. Serving as an inspiration for overcoming physical challenges, Ernie Pepion was the subject of a documentary called Ernie Pepion: The Art of Healing. 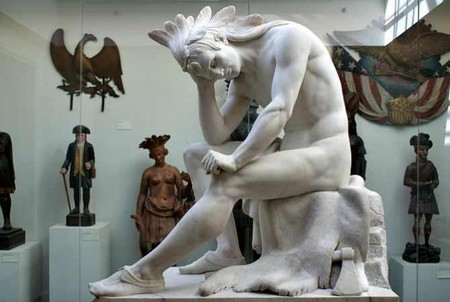 Few may know the work of Ma-Pe-Wi is seen nearly every single day by many Americans around the country. Originally from the Zia Pueblo Tribe of Santa Fe, New Mexico, Ma-Pe-Wi Velina Shije Herrera received no formal art training, yet was able to become one of the most prolific painters of the 20th century. His abstract designs often capture depictions of everyday Pueblo life and ceremonial dances. Ma-Pe-Wi is also well-known for his use of leachina, which is a spirit of things in the real world deeply-rooted in Pueblo culture. Though initially criticized by his own tribe, Wi gave permission to the state of New Mexico to use his re-creation of the Zia sun, which now adorns the state flag.

Though on the surface his prints may seem rather simplistic, Parr’s designs not only express the very essence of Canadian Inuit culture, but are a transformation of his very own life into art. Parr lived nomadically for the majority of his life, and his work reflects the balance of movement between man and nature. These distinctive designs highlight scenes symbolizing the sustainment of life through hunting, fishing, and man against the elements. Parr’s work also has a spiritual quality reflected in his use of ancient shamanic subjects. His work Hunters of Old was eventually immortalized on a 1977 Canadian postage stamp.

Often described as the Pablo Picasso of pottery, Lucy M. Lewis began making pottery at the age of eight from her home in Acoma, New Mexico. Her use of fine lines shows a distinctive balance of craftsmanship, precision, and symmetry. Despite her proficiency and artistic prowess, Lewis had no formal education and was largely self-taught. She was invited to the White House in 1977 and maintains a permanent collection at the Smithsonian Museum in Washington D.C. Throughout her life and her work, Lewis received several distinguished awards including the New Mexico Governor’s Award for outstanding personal contribution, and recognition from the American Crafts Council College Art Association. 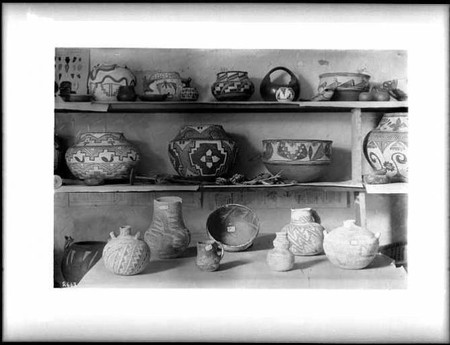 Kananginak Pootoogook was a man truly among the elements of nature. Despite being a 20th century ink sculptor and printmaker he lived most of his early life traveling from igloos in the winter to sod homes in the summer. As a self-taught artist his work often recognizes the transition from traditional Native American life to modern existence. Pootoogook’s work also shows a clear oneness and appreciation for the link between man and nature. His prints reflect animals mimicking human-like qualities, and vice-versa, showing the equality of co-existence between man and beast. Among many other honors, an exhibition of his work was displayed at the 2010 Vancouver Winter Olympics.

Most famously Bob Haozous notes that ‘man is not apart from nature, but part of it.’ Haozous’ work exhibits a challenge to Western philosophy overtaking native thought. Though he served in the navy on the USS Frank Knox in Vietnam, Bob Haozous never forgot his Apache origins in his struggle against racism and marginalization of the Native American people. As strong as his conviction was, his work also reflects a humorous view of social and environmental views. Bob Haozous’ paintings and sculptures can be viewed nationally and internationally at places like the Apache Holocaust Memorial at Dartmouth College and the West Phalian State Museum in Germany. 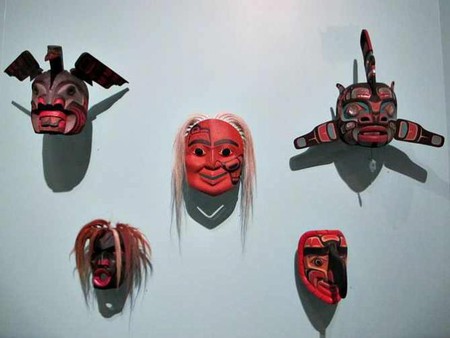 The distinctive mixed media art of Juane Quick-to-Sea Smith is an embodiment of both her Native American culture and troubled childhood. Abandoned by her mother, Smith connects her personal challenges to the challenge of overcoming the myths and stereotypes of Native Americans. Each of her unique blends of painting, pictures, and text tell an individual story of personal adversity and the need to shatter the status quo. Her work is widely viewed at the Smithsonian in Washington D.C., the Whitney Museum, and the Museum of Modern Art. Among Smith’s many honors came her Lifetime Achievement Award from the Women’s Caucus for the Arts.

His powerful and striking wood carvings give the viewer a deep perspective into the Kwakwakawakw culture of the Pacific Northwest of Canada. Calvin Hunt’s hand-carved totem poles, masks, and dance outfits are sculpted from red cedar. His use of vivid red and blue paints brings his depictions of animals and man to life with an unmistakable level of realism and powerful imagery. Calvin Hunt’s work is meant to show the world through a symbolic unification of animal and legend. So strong and forthright is his remarkable work he owns his own gallery at the Royal Academy of Arts in British Columbia.

Widely considered one of the best Navajo tapestry weavers who ever lived, Julia Jumbo is well-known from her intricate designs coupled with the highest level of precision. Jumbo is best recognized for her use of the ‘daisy’ border, which was derived from a legendary weaver named Daisy Taugelchee. Her tapestries are finely crafted with the use of pin-straight lines and symmetrical patterns, surrounded by striking solid borders of both black and white. She used her talent for weaving as a means of overcoming her childhood struggles as well as a reflection of both personal and social order. 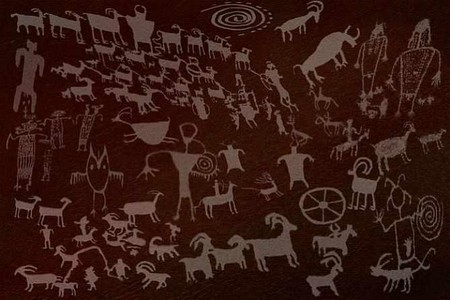 She certainly has a unique background indeed. Jane Ash Poitras was originally trained to be a microbiologist, yet felt her true calling was as a mixed media artist and painter. As part of the Dada movement (early 20th century avant-garde), Poitras sought her strength in depicting the origins of her Cree descent (largest group of Native Americans). Her work is best known for its prolific imagery of sacred Native American symbols like the eagle. Yet as a Christian, her work also contains a strong spiritual element which is evident in Jesus, Mary, and Joseph. Poitras’ art is often seen as a challenge to the forced assimilation of aboriginal culture.

With a combination of spirituality and feminism, Faye HeavyShield became one of the premier installation artists of this century. Originally from Alberta, Canada, she is famed for her transformation of area perception and space through the repetitive use of objects. Symbolism used as characterizations of the power of women in modern culture vaulted her to the forefront of the Canadian feminist movement. Faye HeavyShield’s use of color gives her work a powerful humanistic quality, and her spiritualism is reflected in her recurring use of the wimple (headdress worn by nuns), as a theme of women’s connection to God.

Partners both in life and in art, it is difficult to separate the works of Julian and Maria Martinez. Until the early 20th century the craft of black on black pottery was not known to have existed, dating back to the Neolithic period of Pueblo society. While Maria was the master potter, Julian became her artistic partner when he mastered the craft of painting pottery. Originally from Santa Fe, New Mexico, much of their early work was never signed, since they had little idea it would become so popular and renowned. Maria’s work has been exhibited at several world fairs, but as she was able to learn pottery from her aunt as a child, she sought to offer her knowledge to her children and others through funding by the National Endowment of the Arts in 1973.