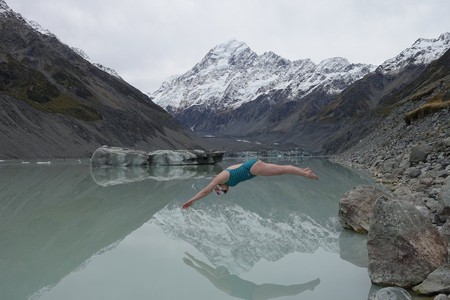 Ocean’s Seven isn’t a long-lost prequel to the popular heist film Ocean’s Eleven. It’s a global open-water swimming challenge, considered to be the equivalent to the Seven Summits climbing challenge.

While Ocean’s Seven sounds hard enough — only nine swimmers have accomplished the feat — imagine taking it one step further, having to swim in waters below 41°F. That’s what the Ice Sevens challenge entails.

Jaimie Monahan of New York City was the first person to complete the challenge, finishing her seventh swim on July 2, 2017.

“I don’t think I could have honestly imagined a better experience than we had last year because it was so special,” Monahan said. “Each swim was definitely challenging, but it lead to these amazing experiences we wouldn’t have had otherwise.” 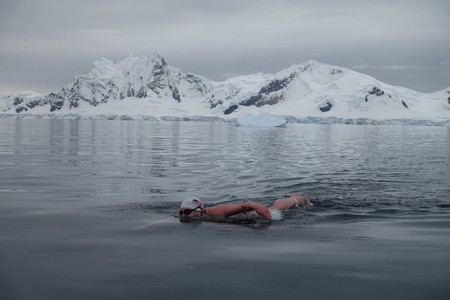 Sanctioned by the International Ice Swimming Association (IISA), participants must swim seven miles in any location off Europe, Oceania, Asia, Africa, North America, South America, as well as a polar ice mile at or below 60° south latitude or above 70° north latitude.

“It was a totally unique challenge because I was able to design all of my expeditions,” said Monahan, a two-time World Open Water Swimming Woman of the Year. “The whole world was my canvas.”

Monahan’s journey began in Europe, swimming off the coast of Reykjavik, Iceland, on April 2, 2016. From there, she went to Asia for a swim in an ice pool cut into a frozen lake in Tyumen, Russia. Monahan swam Aguelmame Sidi Ali lake in Morocco on Feb. 13. Less a than a month later on March 4, she swam in the Arctic Circle off Mikkelvik Brygge, Karlsøy, Norway.

She continued the challenge swimming M Street Beach in Boston on March 9. Monahan traveled across the world for swim No. 6 on May 15, diving into the glacial-formed Tasman Lake in Aoraki/Mount Cook, New Zealand. Monahan capped off her feat by swimming the Beagle Channel off Ushuaia, Argentina, in early July. 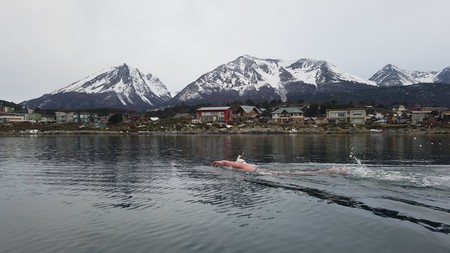 She said she relished this challenge because it brought her and Arik Thormahlen, her partner of 20 years, closer together while traveling the globe.

“It was really cool because a lot of the swimming events are large and social, but I’m an introvert, believe it or not,” Monahan said. “This was a chance for us to spend more time together rather than in a huge group.”

Monahan didn’t just dive into the Ice Sevens cold; she’s been a swimmer her entire life. She swam competitively growing up and for three years at SUNY Geneseo (she graduated a year early). She swam for fun while attending Cornell University for graduate school.

After graduating and despite working 50-70 hours each week at Goldman Sachs, Monahan was able to continue swimming and even broadened her endeavors into triathlons and distance running. Monahan was hooked on open-water swimming when he completed her first open-water swim as part of the Alcatraz Triathlon in San Francisco. 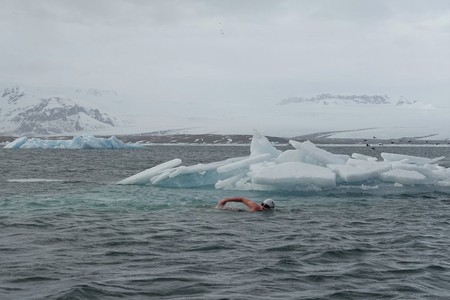 Her marathon swims include the English Channel (her first big swim), Catalina Channel, Manhattan Island (setting a course record in 2017 for the double island swim), Lake Geneva, and the Thames. Monahan, a lead talent specialist at Deloitte Consulting, has represented the United States at cold-water swimming events around the globe including in Germany, China, Norway, Russia, Latvia, and Iceland.

So what’s next for one of the most accomplished marathon and cold-water swimmers in the world? Only time will tell.

“I’m pretty secretive about a lot of things,” Monahan said with a wry smile. “I definitely have my own list. All of my friends get mad at me because I don’t like talking about things before I do them because I feel it jinxes myself, so even my close friends don’t know what I’m planning to do next.”