Meet Ivan Orkin, One of the World’s Best Ramen Chefs 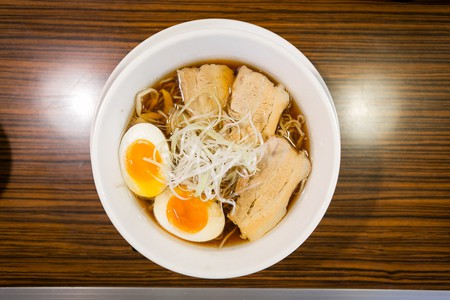 If you’ve tried Ivan Orkin’s ramen at any of his restaurants, you know why it’s internationally recognized as among the best in the world. It’s an unlikely scenario, though: How did a Jewish kid from Long Island invade the insular Japanese world of ramen, a dish perfected by few outside of its home country, and become known as one of the best ramen makers on earth? It was a long ride.

Ramen, the dish of noodles in a rich broth, is now considered an iconic Japanese dish. It’s a relatively new food—only having been part of Japanese culture for about a century—but it’s been fully adopted into the Japanese culinary canon. In Tokyo, the dish has gone from a fast-food item to an artisanal showcase of a chef’s talent, something for hard-core ramen fans to obsess over.

It’s because of this newness that there’s still room for ramen chefs to have a certain freedom of expression; there’s no one way, nor an overly specific and rigid set of rules, to prepare a bowl of ramen as there is for sashimi or tempura, which means there’s room to experiment. The sauces come in different flavors—shia, tonkatsu, miso, etc. The noodles can be thick or thin; there’s a relatively wide range of possibilities for the toppings. Ramen fans will stand in line for hours to visit a noodle shop that offers a new variation on the dish.

One American chef, Ivan Orkin, took this food scene by storm in a country that’s not particularly welcoming to outsiders, surprising everyone (including himself) in the process.

Orkin was raised on Long Island, outside of New York City. He was, by his own admission, a bit of a black sheep; a mystery to his successful lawyer father and artist mother. Academics weren’t his thing; he bristled at authority and was generally a wild child. A job he landed at the age of 15, as a dishwasher at a Japanese restaurant, lit a spark within him, however—especially when they fed him Japanese dishes like rice with raw egg, soy sauce, and bonito flakes. “They were very nice to me; they didn’t yell at me or treat me like I was stupid,” he says on Chef’s Table, “and I was like, ‘nice people, delicious food, language that sounds intriguing but I don’t understand what they’re saying…’ I fell in love with this different world.”

He studied Japanese in college, and headed off to Japan immediately after graduation. “As the tires of the plane hit the tarmac, I had this overwhelming emotion of coming home,” he says on Chef’s Table. “It was very intense.” But he floundered, unsure of which career to pursue, and as a non-native, he found it difficult to be accepted. He soon met a woman named Tami, though, and fell in love.

In 1990, Tami got a job in the United States, and Orkin followed her, vowing that he’d return to Japan eventually. He worked for her computer chip business for a while, unsuccessfully; he was still trying to figure out what to do with his life. His father, pointing to Orkin’s lifelong interest in food, suggested cooking school. So he went. He found that he still hated school, but loved cooking; it was something he was good at. Upon graduation, he got a job at Mesa Grill, in NYC, under famed chef Bobby Flay. Orkin found the discipline of a restaurant kitchen agreed with him. He married Tami toward the end of his time at Mesa Grill, then got a job at Lutece, a bastion of opulent French cuisine. Tami got pregnant, and Orkin began to worry how he’d support a family on his cook’s salary; he moved to a more corporate position at Restaurant Associates.

By the time the couple’s son, Isaac, was two and a half years old, Tami was pregnant with their second child. She returned from a business trip with what seemed like a cold, but died within a week. Orkin was, as might be expected, emotionally destroyed. His wife’s death also meant that he lost his vital connection to Japan, the country and culture that he loved. Wanting to make sure Isaac remembered where he came from, though, Orkin made sure that the two of them would visit Japan at least once a year. On one of those trips, he was introduced to a woman named Mari. Her son, Alex, was besotted with Isaac. Sparks flew between Orkin and Mari over bowls of ramen.

Sometimes the most delicious food is inhaled in two minutes in the middle of a bustling kitchen when you’re starving and just need to. I just love this Tori Paitan it’s the best one I’ve ever had, and we serve it at Ivan Ramen. Come in and try it! #ramen #paitan #slurp

He returned to New York, but couldn’t stop thinking about Mari, so returned to Japan soon after to see her again. She visited him in NYC just a month later. By the end of that visit they were engaged; within a few months they were married. Once she finally received her green card and could leave the U.S., the couple returned to Tokyo for two weeks; Ivan knew he had to return to Japan. They packed up and moved.

Orkin didn’t plan to open a restaurant; he figured he’d be a “house husband” and had no further plans. But he started eating ramen. The more he ate, the more obsessed with it he got. Mari urged him to open a ramen shop. But he didn’t have a ramen mentor or anyone to learn from; he had to figure it all out himself. And somehow it worked. “What I like about ramen is it’s so freewheeling. There are no rules. There’s no rulebook,” says Orkin on Chef’s Table. “I chose to make ramen because I can do whatever the fuck I want. Ramen is the maverick cuisine of Japan.

“Because there were no guidelines, I could just sort of wing it,” he continues. “I started looking for ingredients and experimenting.” He decided to make his own noodles from scratch, an uncommon choice—combining different flours, using more or less water, toasting flour before blending it, using rye flour for an extra flavor dimension. “Ramen is interesting because it has so many layers to it,” he says on Chef’s Table. “And I like the layering of flavors. I love taking one ingredient and breaking it out into lots of different layers and then putting them back together again. Ramen is just the perfect vehicle in which to do that. My ramen has a certain balance, a certain harmony; it’s a little more refined.

“I wanted to do something special. Something with real impact. Something that nobody had done before,” he says. “So I tried different toppings, thinking about umami, and I stumbled upon roasted tomato. It’s basically an umami bomb. And when I tasted it, I was like, Wow, that’s it!”

He’d spent 20 years getting to that moment: Learning Japanese; becoming a cook; learning discipline, and Tami’s death, which caused him to rethink everything. It all set the stage for him to be at a place where he could figure it all out—flavors as well as life.

Orkin found a 10-seat restaurant in a very Japanese neighborhood; he didn’t want American customers or tourists. He wanted to be fully immersed in the Japanese experience. He knew his own ethnicity would be the hook to get people in the door, however. He knew it would also have many customers hoping he’d fail.

In 2007, the first incarnation of Ivan Ramen was born. On his very first day of business, a prominent ramen expert came into the shop; he enjoyed his bowl and gave Orkin the nod, putting him on the map; word began to get out, and after an appearance on a major talk show, customers flooded his small ramen shop. By the end of the year, he was rated “rookie of the year” for his shia ramen. “At one point I looked up and I was like, Huh, I’ve kind of done it,” Orkin says on Chef’s Table. “I’m in my own little space, and I’m cooking all day long, and I’m speaking Japanese. This is great.” In 2010, he opened a second Ivan Ramen in Tokyo.

After 10 years in Japan, however, he realized he missed New York. In 2012, he moved back home, aiming to open a similar type of restaurant in NYC, later closing both his shops in Japan. “I came to New York with the notion of starting from scratch again,” he says on Chef’s Table. “I wanted to be able to make new dishes; rework some recipes especially for New York. The same way I didn’t try to make a Western restaurant in Tokyo, I didn’t want to make a Japanese restaurant in New York.”

He opened his first New York noodle shop, Ivan Ramen Slurp Shop, in the Gotham West food market in Hell’s Kitchen, and his flagship restaurant, Ivan Ramen, in the Lower East Side soon after. Here, he’s able to stretch his culinary wings a bit, going beyond noodles to offer everything from steamed pork buns to fried chicken. “I’ve never pigeonholed myself. I’m not a ‘ramen chef,’ whatever the fuck that is. I’m a cook,” he says on Chef’s Table. As if to prove that point, he recently branched out into pizza, possibly the most iconic of NYC foods, opening Corner Slice, a pizzeria in the Gotham West market, earlier this year.

He hasn’t forgotten his ties to Tokyo, however. “As a chef, you owe it to yourself to cook from the heart,” Orkin tells the New York Times. “Part of mine is in New York, and the other part will always be in Japan.”