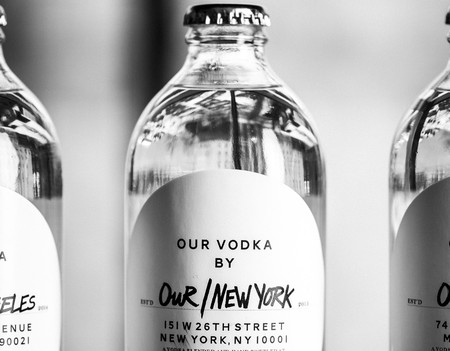 Our/New York is the first vodka distilled in Manhattan since Prohibition. | © Our/Vodka / Derivative from original

When it opened in May 2018, Our/New York Vodka Distillery & Bar became the first legal distillery in Manhattan in nearly 100 years.

This global vodka has a local flair, inspired by the city. From the cool hues of the walls to the simple, yet elegant barback—inspired by a nearby cast-iron building—Our/New York Distillery & Bar, located in Chelsea, looks and feels like New York. It includes a tasting room, bar, and shop, supplying the 80-proof vodka distilled on-site.

Even the vodka is 60% New York tap water, the same stuff that makes the city’s pizza and bagels famous. The novelist Sergio de la Pava wrote in an article for the Wall Street Journal, “Our/New York is the smoothest, best-tasting vodka I have ever poured. I guess it’s floral and fruity and whatever, but it also just goes down so easily, easier than anything 80 proof has any right to.” 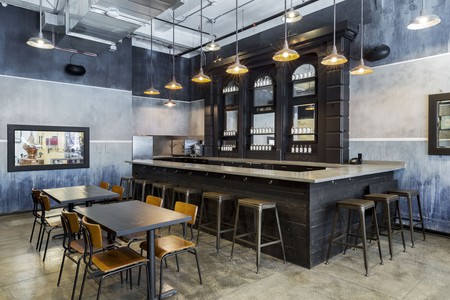 The parent company, Our/Vodka, is a global brand with locations in seven cities worldwide. While they all use the same recipe, each city’s vodka is unique, produced by local entrepreneurs with local ingredients.

Our/Vodka’s team tapped Dave Ortiz, an artist known for running skatewear shops, to run the Manhattan distillery. Ortiz had no prior distillery experience, but as one of the first employees of the Zoo York brand, he knew how to sell New York.

New York is at the heart of the distillery’s interior design. Along with the barback, which is built from reclaimed Brooklyn wood, the wall colors are visual cues to the street, sky, and sidewalk.

“Three elements that every New Yorker sees, even when they’re looking at their phones,” says Ortiz. The drippy, gritty texture of the paint suggests his background in street art. 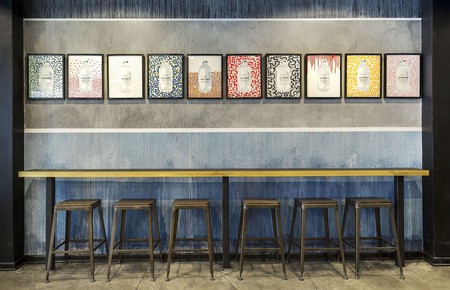 Dave Ortiz brings his style to Our/New York with artistic renderings of each Our/Vodka city's bottle. | © Our/Vodka / Derivative from original

Our/Vodka initially planned to open its second location in New York in 2013. But it soon realized that building a distillery in the heavily populated and regulated Manhattan meant jumping through a number of hoops, including liquor licenses to fire codes. According to a press release, it took five years and 220 meetings with different authorities for Our/New York to open. It’s easy, then, to see how it took so long for Manhattan to get a distillery, though there’s been a rollback of state alcohol production laws in recent years to allow for distilleries in other boroughs. 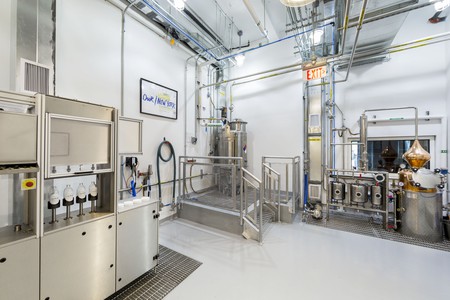 It took five years for Our/New York Distillery to meet all requirements to open in Manhattan. | © Our/Vodka

After all that, Our/New York is determined to connect with New Yorkers, and not just through themed cocktails like its Empire Martini. For Ortiz, “It’s just working with New Yorkers, having events for different local people.” He hopes that suppliers like Flatbush’s Hunger Pang, which provides the bar’s snacks, and nearby startups will help elevate the distillery’s brand.

Certainly, the word is starting to spread online, with Cindy T. on Yelp saying, “The bartender checked in a couple of times and seemed watchful of people’s reactions. I take that as a sign of the good care that went into our drinks,” and Abbe D on TimeOut New York calling it, “Perfect for after-work drinks or a fun weekend spot.” A sign of good things to come.