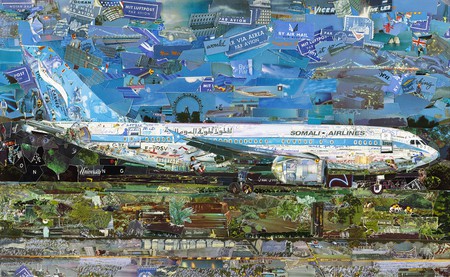 The celebrated photographic agency Magnum Photos is hosting its unique print sale again in November 2018 with a collection of impressive visual stories from around the world that explore the concept of crossings.

Known for telling unique stories about the world from the perspective of dynamic photographers employing a variety of styles and approaches, Magnum Photos is once again offering over 100 images in its affordable $100 sale of museum-quality prints. The only catch: it’s on for just five days.

Partnering with Aperture Foundation for a second time, the November 2018 sale brings together an exciting range of international artists to explore the notion of crossings. Each image responds to this theme in a different way, revealing wonderfully literal and abstract depictions.

The works blur the boundaries between documentary and conceptual practice, reflecting on subject matter that ranges from the physical act of crossing a road, ocean or a border to notions of identity, religion and war.

The Magnum Square Print Sale in Partnership With Aperture runs from 9am EST/1pm GMT Monday, October 29 until midnight EST Friday, November 2/4am GMT Saturday, November 3 2018. You can purchase each 6in x 6in (15cm x 15cm) museum-quality print, which is either signed or estate-stamped, for just $100 at Magnum Photos’ shop.

Here is a taste of some of the prints that are available in the five-day sale. From Harry Gruyaert’s striking image of Shibuya Crossing in Tokyo to Madagascar-born Malala Andrialavidrazana’s photomontage of archival material celebrating cross-cultural relations, each image is accompanied by personal annotations by the photographers.

“In 1979, she [Eve Arnold] took two three-month trips to the country [China], crisscrossing her way through 40,000 miles [64,370 kilometers] and capturing extraordinary slices of daily life that hang on the wall like freshly discovered jewels. She is painterly in her evocation, combining bright patches of foreground colour with vast, broad horizons and giving each photograph a sense of self-containment, both intimate yet detached.” – Elizabeth Day, ‘So Much More Than Marilyn,’ The Guardian (November 11 2007) 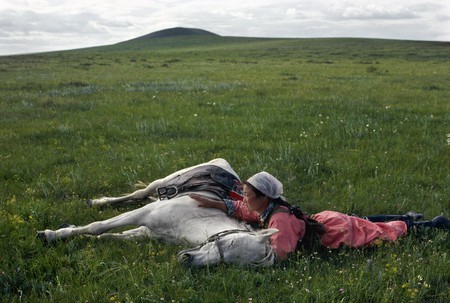 “Sometimes photography gives you no time to think. That can be a relief, and an escape. Other times it’s more meditative. The slow crossing of this boat across a lake in Kashmir gave plenty of time to revel in the quiet beauty of the bright flowers against the muted winter landscape. Photography crosses constantly between split-second decisions and slower, more methodical ones, with every variation in between. In a place at war like Kashmir, it can cross equally quickly from the sublime to the violent.” – Peter van Agtmael 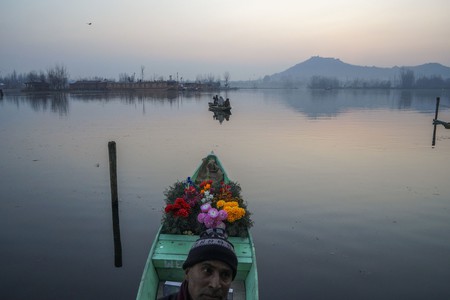 “Postcards From Nowhere is a series about how we have learned to deal with places we are not at, have never been, nor wished to be, through images. It confronts the materiality of the postcard, which travels, physically, from one place to its destination, with the immateriality of spatial memory. My intention with these works is to point out the ambiguities of spatial memories and how important these are in the personal making of the notion of the world we live in.” – Vik Muniz

The photographer’s proceeds from the sale of this print will be donated to Escola Vidigal.

“Go and discover for yourself, because the fantastic thing about photography is that you are able to freeze a moment that can never come back.” – René Burri 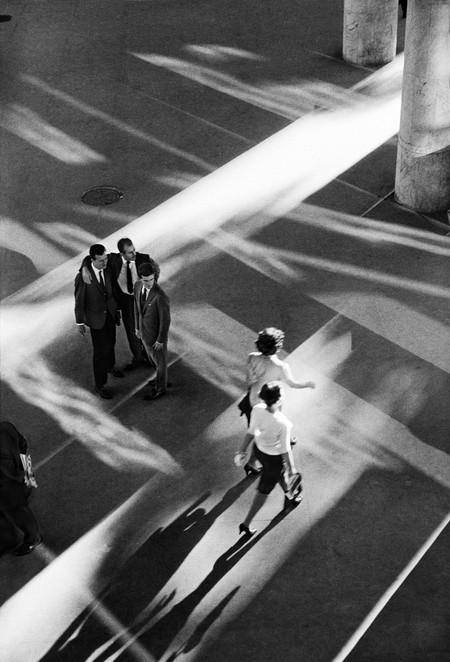 “This image comes from my ongoing series Figures, which aims to remove the borders of meaning around specific imagery to inspire cross-cultural associations. The photomontages from this series are composed of 19th-century maps, currency notes and other archival materials. When I mix all the figures and details together it is like writing – creating different phrases within a picture frame.” – Malala Andrialavidrazana 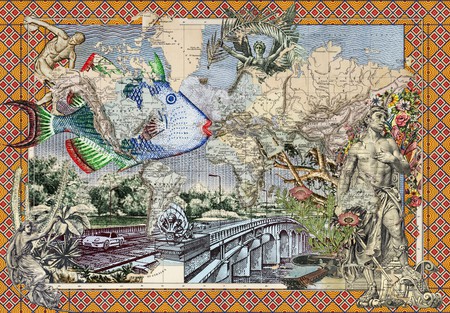 ‘Crossing in the Ginza district’ (1996) by Harry Gruyaert

“Since my first trip to Tokyo in 1996, I have always been fascinated by Japan; it’s so different from China or Korea. The attitude of the people is distinctive. You have an incredible sense of security. There is also such a sense of discipline, like at this crossing where everybody waits patiently for the light to change before moving forward. Something else about Japan: nobody looks at you. It’s paradise for a photographer, but after a while you wonder if you still exist.” – Harry Gruyaert 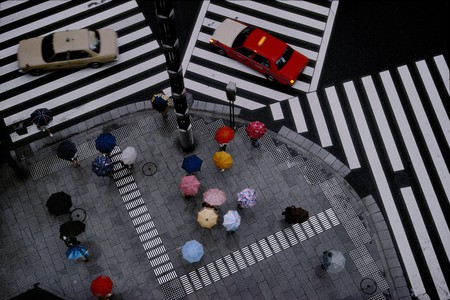 ‘Evacuation of Sephardic Jews from Sarajevo’ (1993) by Gilles Peress

“Since the fall of the Berlin Wall, rather than ‘The End of History’ as described by Francis Fukuyama, we find ourselves in an historical period where there seems to be no third term, no possible resolution to the ‘Clash of Cultures.’ Out of this period, I was left with a feeling that we had, without realizing it, shifted from one epoch into another, one that is not structured by the traditional Hegelian dialectics but much more by the bipolar dialectics of similitude and difference, whereby if you are different from me you have to go, or I have to kill you. Such was the nature of the conflict in Bosnia in the ’90s that the Sephardic Jews of Sarajevo had to flee.” – Gilles Peress 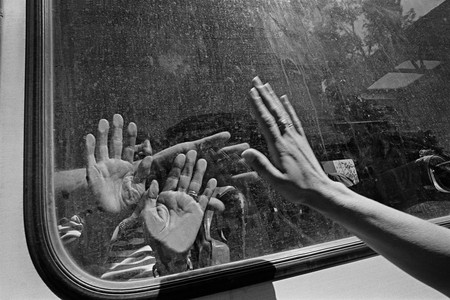 “A girl on a Vespa on her way to ‘who knows where,’ when the light stopped her at the 72nd Street crossing near the Dakota, where John Lennon would one day cross paths with his fate. She takes this moment to finesse a fingernail before she resumes her downtown journey, while I, stopping at the same crossing, but on foot, leap into the street to capture this vision of a dream girl before time takes her on her way.” – Joel Meyerowitz 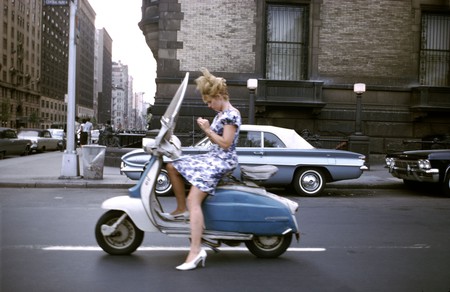 “The United Kingdom, a union of nations forged centuries ago, and British identity too, is currently in a state of confusion as Brexit threatens; increasing pressure from growing white nationalism weighs heavily into the mess. Against this backdrop, I’ve been focused on photographing young Muslim men, second- and third-generation immigrants to the UK, who, caught in the crosshairs of traditional Islam and permissive British youth culture, are forging a distinct subculture of their own. These two men, standing as they do, symbolize the inevitable, that they too are the embodiment of the UK.” – Mahtab Hussain 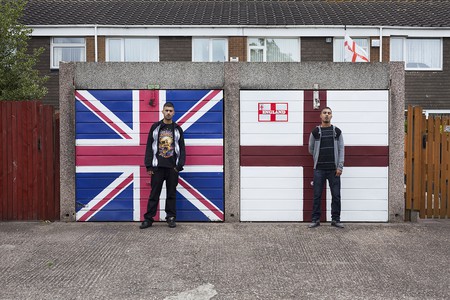 “Their itinerary was unplanned; Rodger’s aim was to find settlements remote from colonial ‘civilization.’ It was in southern Sudan that he came closest to what he was seeking, and there that he produced some of his most striking and successful work. Relying on his remarkable ability to gain acceptance, Rodger stayed with many of the communities for weeks, photographing, in his words, not exhaustively but ‘when something happened.’ His approach was neither dispassionate and anthropological, nor sensational. Where possible he included in the image the environment of his subjects, to explain rather than mystify, to convey the unity of man with nature which he saw as his ideal, the real end of his quest.” – Martin Caiger-Smith, George Rodger, Magnum Opus: Fifty Years in Photojournalism(1987) 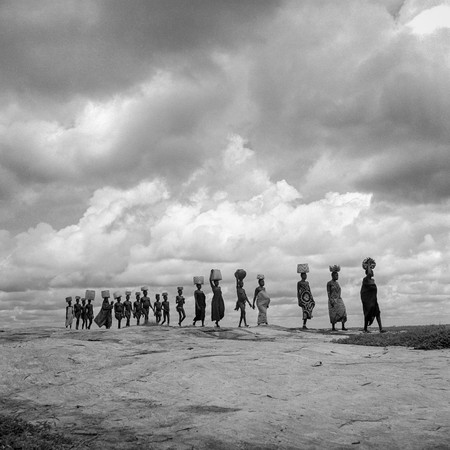 “I had covered numerous protests and rallies on the National Mall in Washington D.C. But the Million Man March surpassed all of those as an unforgettable experience. Hundreds of thousands of African American men gathered en masse for a peaceful rally, stretching from the US Capitol to the Washington Monument. Many brought their sons. Just after the sun had gone down, many dispersed and headed home; I saw these two adult men with their sons, the golden light illuminating the Capitol. It was a symbolic moment of reflection, for them but also for me, on what this day meant.” – Pete Souza 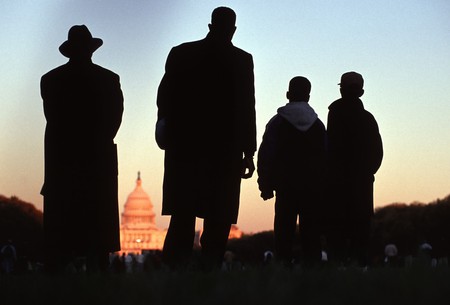 “I’ve long been fascinated by the transience and paradoxes of the US-Mexico border. Between 1975 and 2001, I crossed the border numerous times, photographing this unique region to try to make sense of it. Even though these two countries were culturally worlds apart, it sometimes seemed that the border region was a kind of third country between them – 2,000 miles [3,220 kilometers] long and 10 miles [16 kilometers] wide, a place where two countries meet, sometimes easily, sometimes roughly, and often with a confounding note of surrealism. Looking back, I realize that Crossings [2003], the book I made from this work, reflects the last days of a more porous border between the United States and Mexico, so different from today’s militarized border.” – Alex Webb 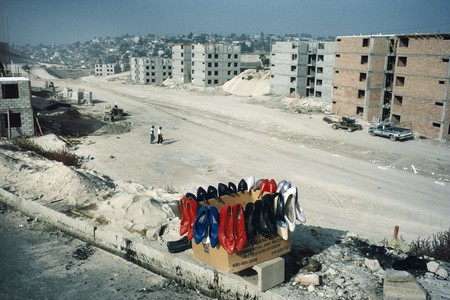