Keith Haring’s Public Art And The Murals That Changed America

Keith Haring’s bold artworks are a direct response to the 1980s New York City street culture. Artist and social activist, his work was heavily politicised expressing his own personal views on the topics of sexuality, society, birth and death. Striving throughout his career to make his work accessible to all, today his paintings are a widely recognised visual language of the 20th century. 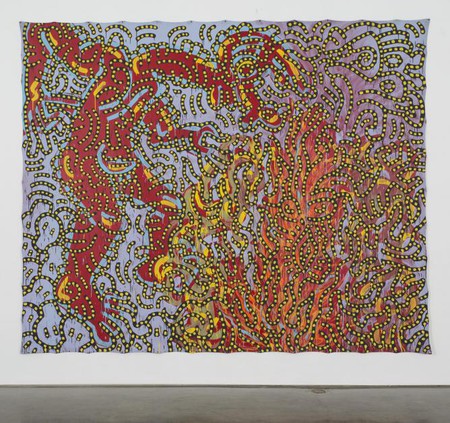 In a vibrant and playful array of interlocking forms and colours, Haring’s paintings combine vivid, painted graphics, with graffiti-inspired drawings. He began work as an artist in the mid-1970s, creating intense and richly illustrative paintings directly onto the walls of the New York subway. Using the city as his canvas, his work later progressed into large-scale murals and free-standing paintings that became not only a celebration of colour and figurative line, but also an opportunity to hold a critical mirror up to contemporary culture. Haring was highly regarded as a man of intense, creative spirit, an activist and socially conscious artist he frequently explored themes of technology, sexuality, capitalist greed and, importantly, AIDS.

Born in 1958, in Reading, Pennsylvania, his love for drawing and painting made itself evident at an early age. The short time spent at the commercial art school in 1976 paved the way for his early style, which had an animated and illustrative quality to it. His experience in the commercial arts influenced his methods of circulating his work to the general public by displaying within public spaces. For example, the 1986 mural Crack is Wack was painted directly onto the wall of a handball court in a playground in New York, to warn youths against the dangers of drug use. Haring utilised the same techniques as the commercial arts to display his creative vision and ideas within the city, like the vast bill boards and advertising campaigns which shout down at passers-by from every street corner. 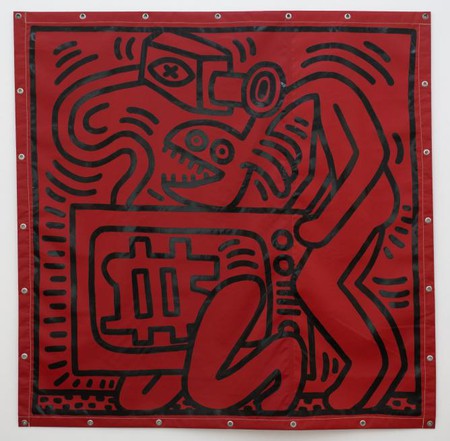 The appearance of Haring’s work seems to bring along a sense of life and energy. The playful motifs and imagery that are so iconic to his practice include dancing figures, dogs barking, hearts throbbing, all evoking a seemingly celebratory and optimistic perspective of the world. One of the most iconic motifs, Radiant Baby, an illustration of a crawling infant with rays of light emitted from its body, is not only his response to the newness of life, but also an expression of his admiration for childlike creativity. It is perhaps this joyous naivety that makes Haring’s work so immensely intriguing and playful, and it is without surprise that his paintings were able to reach a wide audience and gain popular acclaim from both the critics and the masses.

Haring’s work is considered to be a significant part of the populist aesthetic movement in its attempt to break down the boundaries between high art and popular culture. The artist advocated the idea that ‘art is for everyone’; refusing to simply accept that the galleries possessed the power to elevate a work of art, he took things into his own hands, choosing to work directly with and within public space. Although he was arrested on numerous occasions, he tirelessly sought to break open circuits of communication by locating his artworks where they could be enjoyed widely, while preventing them from becoming commodities, in line with his beliefs on anti-consumerism. He moved in the same sphere as Andy Warhol and Jean-Michel Basquiat and fed off the seductively bold youthful aesthetic which characterised pop art at the time. 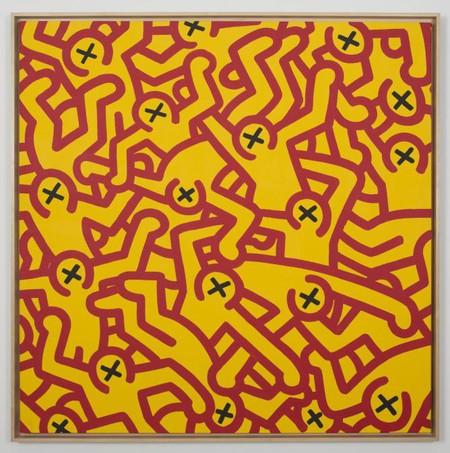 Drawn in by the exuberant colour palette and bold lines, we can be tempted at first to believe that Haring’s work conveys quite simply a pure vivacity for life. But on closer inspection, the paintings also seem to contain a darker undercurrent and carry a much more cynical stance of the world. Winged creatures, barking beasts, figures climbing through one another, his paintings seem to possess an air of mythology, but wrapped in a plastic and artificial aesthetic. They almost take the form of contemporary cave paintings, possessing an echoing primitive quality, which contrasts with the striking man-made colors.

Indeed, although he had a very clear political vision, many of his works exhibited highly personal views and experiences. The theme of AIDS became extremely prevalent in his later works, reflecting the strain of living with the disease which took many of his friends’ lives and, most tragically, his own. Striving always to make his art more accessible, Pop Shop was opened in 1986 in New York City’s SoHo neighbourhood, a retail shop selling T-shirts, posters, badges and other affordable items all bearing his striking designs. Today the Pop Shop still exists but in a digitalised, online format. The Keith Haring Foundation, another memorable and lasting initiative by Haring, was created with the mission of providing grants to children in need and supporting those affected by HIV. Established by the artist in 1989, it continues the legacy of Haring’s work to this day. 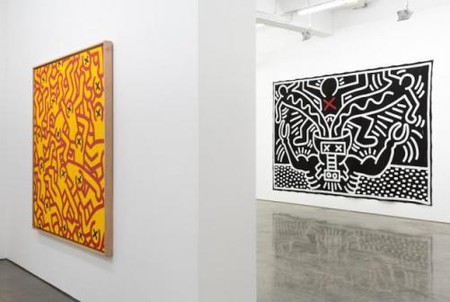