Joe DiStefano’s Guide to the Untapped Restaurants of Queens 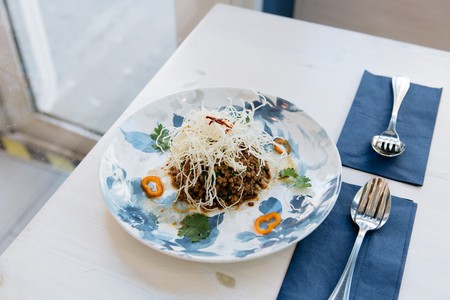 Food writer and tour host Joe DiStefano takes Culture Trip on a tour of his favorite spots in his home borough of Queens.

Joe DiStefano is sporting an outfit entirely dedicated to Queens.

His T-shirt advertises the World’s Fair 1940-1965 anniversary festival, in alternating blue and orange lettering. His blue baseball cap flaunts “Queens,” brightly stitched in orange thread. Even his Converse high-top sneakers are streaked in zig-zagging blue and orange, a not-so-subtle nod to the identical flying colors at the nearby Mets stadium. It’s a charming welcome to New York City’s largest – and most diverse – borough. 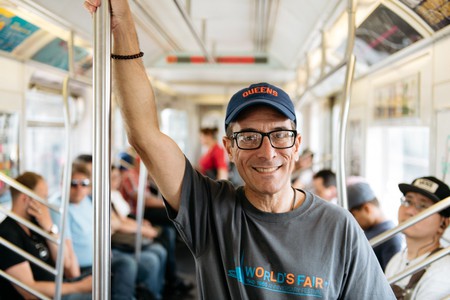 As the Culinary King of Queens, Joe has emerged as a food authority, showcasing the borough’s indisputable culinary diversity.

“Queens is the real New York City: actual neighborhoods filled with immigrant strivers living the American dream and often hungry for a taste of foods from back home,” DiStefano says. The borough has long been a hub for immigrant communities from far-flung countries. Unsurprisingly, the neighborhoods where they settled are renowned for a distinct cuisine: South East Asian in Elmhurst, Indian and Nepalese in Jackson Heights, Chinese in Flushing. 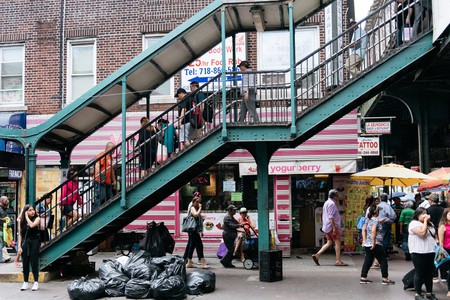 “When I moved to Queens in my twenties, it really opened me up to all sorts of culinary culture. In the evenings, I would take the 7 train to Roosevelt Avenue and then walk home, experiencing a different cuisine each night,” DiStefano says.

Back then, there was no Instagram or guidebooks of Queens for him to find recommendations; he’d simply wander into one of the myriad restaurants congregated near the bustling avenue. His passion ultimately prompted him to document his findings on his blog Chopsticks and Marrow, and he regularly hosts food tours. His first book, 111 Places in Queens That You Must Not Miss, is a sweeping guide to the unlikely, the obscure, the edible.

Although we begin in Queens, we end up traveling the world – simply by hopping on the 7 train. From the cacophony of Flushing’s Chinatown to the serene streets of Elmhurst, this is DiStefano’s guide to the best restaurants, food stalls and cafés in Queens. 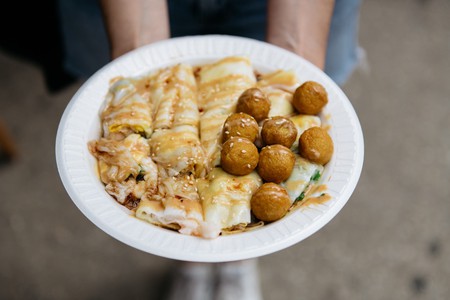 DiStefano maintains that no one in Queens – or anyone in the other four boroughs – makes rice rolls like Joe’s Steam Rice Rolls.

Here, a flurry of chefs tap metal trays so the rice batter settles. The pans are transferred into the steamer, transforming the once-translucent batter into an opaque white sheet. Once out, the thin sheets are ready to be crowned with toppings. There are over a dozen fillings to choose from – rounds of beef, pork and liver; ribbons of scrambled egg, char siu (barbecued pork) and crisped up roast pork – all folded into the batter and delicately maneuvered into one long, wobbly roll. 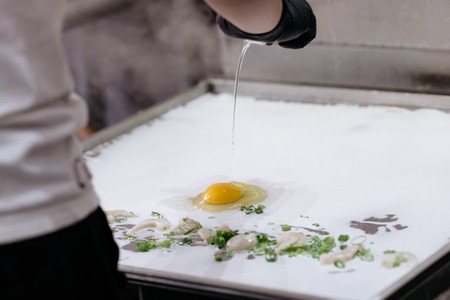 After the rolls are sealed, the chefs chop them into smaller, bite-sized rounds. The fragile rolls are slipped onto a white styrofoam plate, drizzled with peanut and soy sauce, and finished off with a smattering of sesame seeds. They’re springy and slick to the touch, cloaking delicate bits of meat. 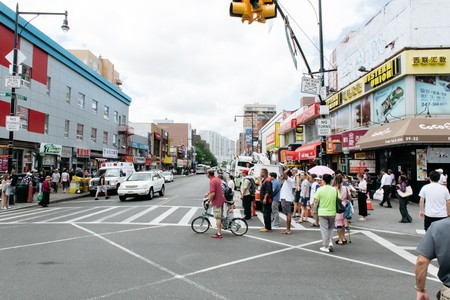 Around the corner from Joe’s Steam Rice Rolls is C Fruit Life, a Hong Kong-style dessert cafe. In the front of the shop, cooks hack away at pink and black-freckled dragon fruit, tossing cubes of soft flesh into whirring blenders. But DiStefano insists that the must-order is durian shaved ice.

Spiky on the outside with a stringy, custard-like interior, durian is a pungent fruit that’s been described as a mix between turpentine and gym socks. 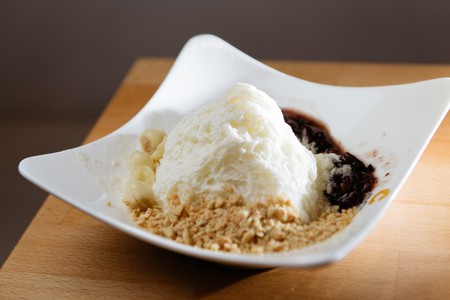 At C Fruit Life, the durian shaved ice is prepared like shawarma, chopped away like meat on a spit. The shaved ice is streaked with clusters of small, concave air pockets resembling freshly fallen snow. Topped with red beans, crushed peanuts and ginkgo nuts, it’s crystalized, tropical and, most importantly, neither smells nor tastes of gym socks. 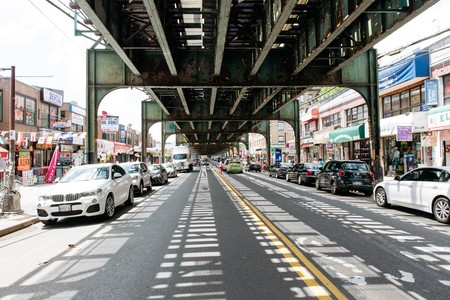 Beneath the 90th Street-Elmhurst Avenue 7 train station sits Taqueria Sinaloense, a sliver of a space slinging food from Sinaloa, a northwestern region of Mexico. The restaurant only opened in November of 2017, but it feels storied. 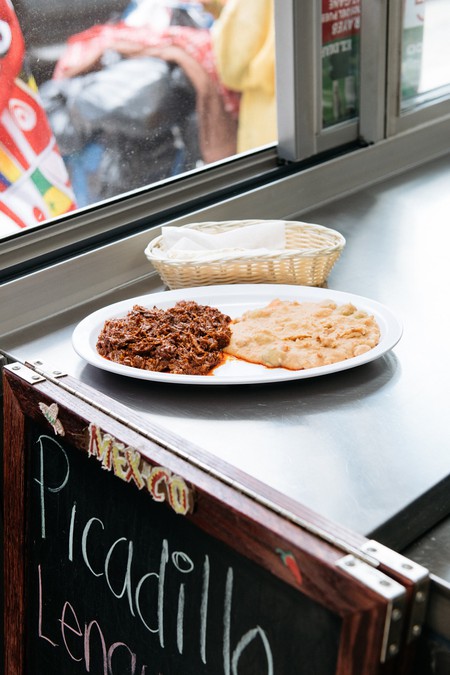 Here, the move is chilorio. Simply, chilorio is thrice-cooked pork. It’s braised for hours, wrenched apart into thick ribbons and cooked in a host of ingredients from cumin and chocolate to ancho and lard. It’s then seared on the comal until delightfully crunchy, a color convergence of crimson and copper. The pork arrives glistening and swimming in a spicy, chili-flecked sauce. It’s flanked by a pool of orange refried beans, streaked with morsels of pork and whole green olives. A wicker basket jammed with folded tortillas rests alongside.

As the dish hits the table, DiStefano demonstrates the proper way to eat it by swiping a mound of beans on the tortilla and scooping hunks of pork on top. 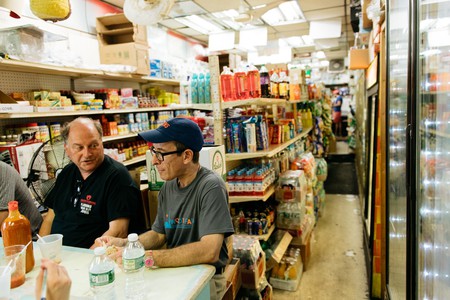 Seafood cocktails extraordinaire hide among the aisles of a modest bodega

“La Esquina del Camaron Mexicano started out in front of this bodega,” DiStefano says, explaining how it originated as cart on the corner of Roosevelt Avenue selling Veracruz-style seafood cocktails in the shadow of the elevated train tracks.

Eventually the cart merged into a small kitchen in the back of the bodega – past the narrow aisles lined with canned Goya beans and Mexican chips – where it morphed into a teeny counter operation doling out cocteles al estilo Mexicano – the Mexican equivalent of a shrimp cocktail. 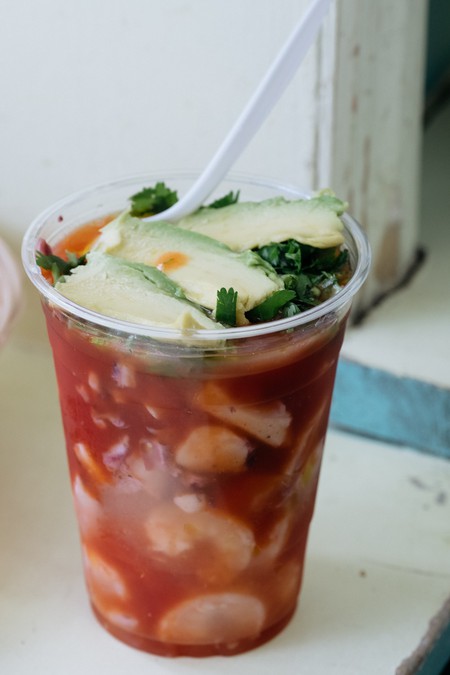 Bits of shrimp and octopus swim in a cocktail of tomato, orange and clam juices | Cayla Zahoran / © Culture Trip

The mixed coctele is presented in a clear plastic cup and is otherwise unadorned. The chefs pour a red sauce – a confluence of tomato juice, orange juice, clam juice and hot sauce – into a cup containing pieces of shrimp, octopus and avocado. A plastic spoon is wedged in the coctele, further adding to the loveable unpretentiousness of the place. 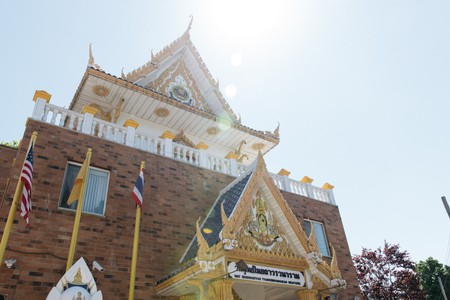 Away from the the bustle of Roosevelt Avenue, Lamoon is a restaurant specializing in northern Thai cuisine: herbaceous, bitter ingredients, fish, and sticky rice.

“In Manhattan, Thai restaurants are catering to an entire country’s cuisine – an encyclopedia of food,” DiStefano explains. “But here in Elmhurst, restaurants are hyper-regional. Some just serve one dish.” 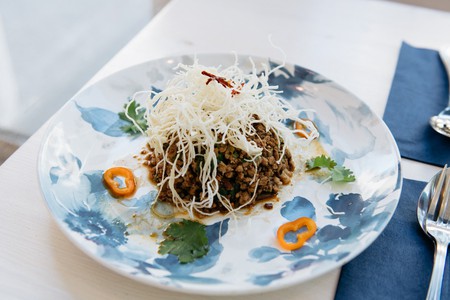 At Lamoon, it’s all about the spice. After a few bites of abb ong oor – steam-marinated pork brain tossed with homemade shrimp paste and herbs, wrapped in a banana leaf – your lips begin to tingle. Then there’s larb neua (ground pork and pork belly mixed with nine herbs and shrimp paste, crowned with a twisting tangle of crunchy rice noodles), where even furiously guzzling chrysanthemum tea won’t quell the fiery heat. Both dishes can be offset with an order of khao kun jin: purple-stained jasmine rice marinated in pork blood and mottled with delicate morsels of pork. It’s soft and sticky, offering a gentler blood sausage flavor. 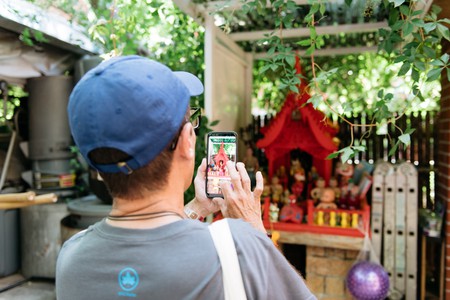 In the back of Wat Buddha Thai Thavorn Vanaram, offerings such as dolls and soda cans are displayed | Cayla Zahoran / © Culture Trip

Thai shaved ice proves to be sweet and savory

On hot days, there’s Khao Nom’s shaved ice to cool you down. There are two versions: tao tueng and tub tim krob. Each is served in an ornate gold bowl, a mountain of ice covered with a thick syrup. 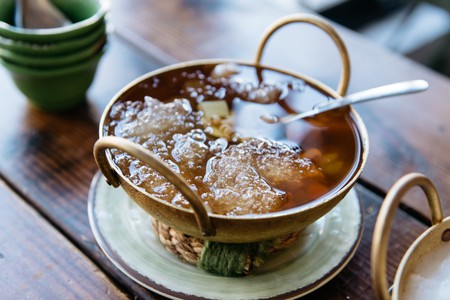 Tao tueng flirts with the savory. Lotus seeds, barley pearls, dates, longan fruit, potato and tapioca swim in a subtle longan syrup. Tub tim krob leans on the sweeter side: pink water chestnuts and shards of coconut float in a cloudy coconut-milk syrup. Both boast wonderfully confusing textures: crunchy from the ice, chewy from the tapioca and soft from the steamed potatoes.

DiStefano concludes the tour here, but there’s plenty more to discover in Queens. So how does the writer respond to diners who are apprehensive about tackling the borough’s complex culinary scene? Easily.

“Don’t be. Pick a neighborhood and get off a subway stop and follow your nose. As my pal Andrew Zimmern says, ‘If it looks good, eat it.’”