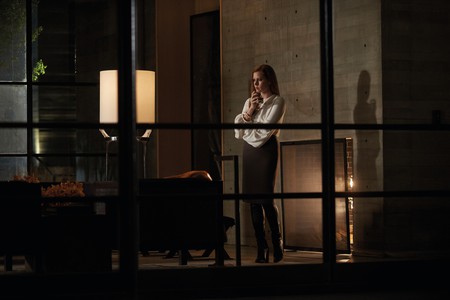 Nocturnal Animals, the second feature written and directed by the fashion designer Tom Ford, is a fatalistic drama about an embittered divorced writer who manipulates his ex-wife into reassessing the collapse of their marriage years before.

Based on Austin Wright’s 2003 novel Tony and Susan, it’s a film about the haunting of the present by the past, like Ford’s auspicious 2009 debut A Single Man. It makes you ask yourself what traps did you lay for yourself that you can never wriggle free from? 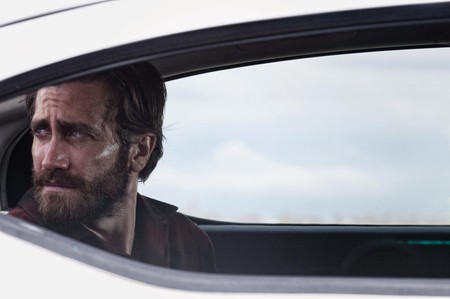 From the film’s perspective, Susan Morrow (Amy Adams) is the film’s transgressor since she committed a devastating emotional crime against her ex-, Edward Sheffield (Jake Gyllenhaal). Though Edward was her soulmate, she dumped him for the much more handsome Hutton (Armie Hammer) an Alpha male with better financial prospects. The revenge Edward inflicts on her is vicious but in the realm of the imaginary. It takes the form of a novel he has written, dedicated to Susan, and sent to her as a proof.

We don’t see the hateful story as Edward has written it, but how Susan casts and directs it in her mind as she reads it. It tells of a couple, Tony (Gyllenhaal) and Laura (Isla Fisher, a fair Adams lookalike) and their teenaged daughter India (Ellie Bamber) who are menaced at night on a remote Texas highway by the sexual sadist Ray (Aaron Taylor-Johnson) and his two cretinous henchmen. Gyllenhaal’s dual role indicates that Susan interprets the story as an infernal allegory of her and Edward’s marriage.

Susan is so disturbed by its authenticity that she make a panicked phone call to her own teenage daughter, Samantha (India Menuez), to make sure she is all right. Because Susan is the film’s protagonist and “owner” of the meta-narrative, it’s her moral value system the movie questions. (That’s not sexist exactly, but it does beg the question how Ford might have told the story from a male perspective, with Gyllenhaal as the treacherous husband and Adams as the revengeful novelist). 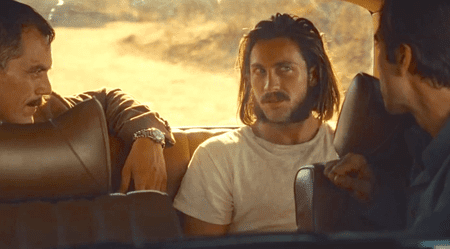 Susan’s mother (Laura Linney excelling as a wealthy Texas matriarch in a flashback) had warned her when she was at grad school not to run off with the penniless writer Edward, whom she deemed “weak.” The word resounds through the film, and is the source of Edward’s low self-esteem and the rage that galvanizes him to write a potentially popular novel and drop it like a bomb into Susan’s lap. Functioning as the return of the repressed, it detonates her shallow present reality and makes her yearn for him again. We should all write such a book.

Adams seldom plays morally ambiguous characters, the most striking having been her preppie seductress in Cruel Intentions 2, her Lady Macbeth-like Peggy Dodd in The Master, and her ravishing, half-mad con woman in American Hustle.

It would be exciting to report that Susan is a full-blown femme fatale, but she’s more of a jaded innocent who in her late thirties affects the image of an ice queen. She wears chokers, stark blacks and whites, the occasional virulent green; her severe red mane is a soignée version of Veronica Lake’s peekaboo cut. It’s style as a protective shell, but it’s full of holes: her snarky assistant (Jena Malone) has her measure; her husband – whose business is failing – disappears on long business trips with his mistress. 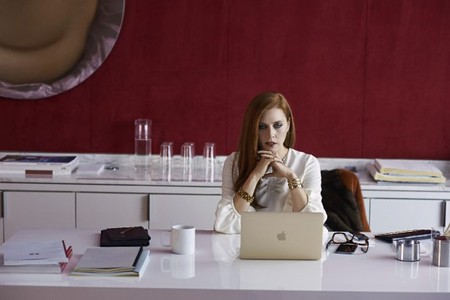 The opening credit sequence reveals that Susan’s gallery is a showcase for self-conscious grotesquerie. Its latest installation features obese naked women dancers displaying their elephantine thighs and grimacing lewdly at a camera. A mockery of thinness fetishism in the fashion industry, it comes across as a desperate bid for shock appeal with a flavor of early David Lynch – but Lynch wouldn’t have touched it.

It also bores Susan, who in her visualization of Edward’s book removes the dancers from their pedestals and relocates them to a Texas bar where they are no longer ridiculous. It’s not just Edward she misses but their old, less manicured life together, which she fooled herself into renouncing.

Nocturnal Animals (also the title of Edward’s novel) feels at times like a stylish but empty haute Hollywood romance about well-off, navel-gazing liberal arts graduates untouched by the struggles faced by ordinary people. Yet the sorrow that suffuses the film is as perversely pleasurable to savor as its sudden lurch into the neo-noir territory of the Coen Brothers’ Blood Simple and Lynch’s Lost Highway. 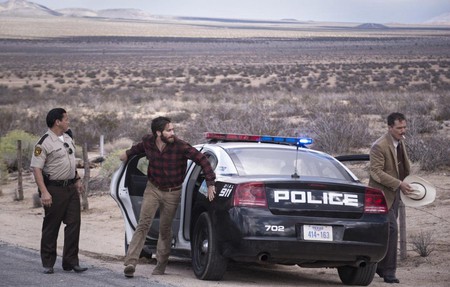 It echoes those films in its recognition of the terror that can fall on unsuspecting travelers of the nation’s rural blacktops. It has even more in common with Bruno Dumont’s road movie Twentynine Palms, another fantasy of desecration, though whereas Dumont’s target was America, Ford’s is a romantic betrayal.

He pulls off two daring gambits here. First, Nocturnal Animals defies genre conventions by allowing the baroque grandeur of its framing story (Susan’s present reality) to penetrate the dankness of Edward’s hard-boiled novel – Abel Korzeniowski’s melancholy classical-style score does much to merge Susan’s sensibility with his own.

Second, her L.A. existence has more of an oneiric quality than the vivid fiction of Tony’s attempt to rescue Laura and India from the degenerate thugs. Reversing the familiar relationship between “real” sequences and dream interludes in films, Ford speculates that art (Edward’s story) contains more truths than reality and simultaneously that truth is stranger than fiction.

Susan sees the character of Ray as both repulsive and charismatic – it’s as if Edward couldn’t help feeding her imagination with the specter of a violator who is nastier, sexier, and more dynamic than he ever was. Is Ray (minus the evil) whom he wishes he could have been?

As Susan’s feelings for Edward begin to reawaken, she softens the character of the Texan detective who investigates the abductions of Laura and India. A good ol’ boy who initially has little respect for Tony, he begins to love him as a son. Through this wiry, laconic cop – played by a very touching Michael Shannon – Susan starts to put a protective arm around Edward again.

Nocturnal Animals is one of those movies that invokes Edgar Allan Poe’s couplet, “All that we see or seem/Is but a dream with a dream.” It might be a niche film with a rarefied atmosphere, but it trails a poisonous mushroom cloud that can suck in anyone who has wilfully walked away from the love of his or her life, or sought to wound someone they can’t have. The afterwinds linger – it’s that good.