Inside Wigstock: A Revival and Resurgence of New York Drag Queens 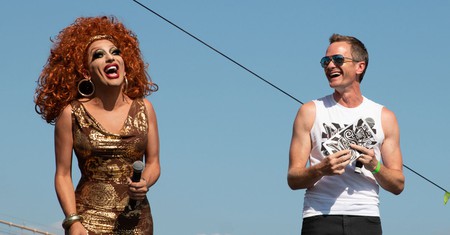 After two decades, New York’s original drag queen festival comes out of retirement for an epic showcase of performances and hair.

It was minutes between daylight and darkness on Manhattan’s Pier 17 rooftop – that hour when the sky turns the color of denim. On stage sat a giant embellished version of a Birkin satchel purse. Bob The Drag Queen, a 6′2″ vision of florals and tulle, vogued, hard, to the sound of “Purse First.” Suddenly, the front of the satchel collapsed, revealing a four-foot-tall figure in a candy pink swing dress and bright yellow tights. The Insta-famous 11-year-old drag kid and gender activist Desmond Is Amazing circled the stage. The uproar from the crowd vibrated every inch of Pier 17 after Desmond’s grand finale, plummeting to a dramatic death drop.

“I’m dressed up as Lady Miss Kier,” he said later of his fitted red wig, holding a large fan with pressed yellow and silver nails. Over the course of the day, over 50 drag queens took to the stage of this downtown Manhattan rooftop. And Desmond’s energy never faded – performance after performance. “It’s like a celebration for people who don’t feel accepted,” he said. 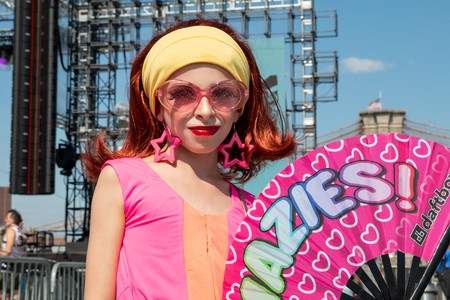 “Kids in America see me, and that resembles how you can be anyone,” Desmond said. | © James Emmerman / Culture Trip

On September 1, 2018, decades of New York’s most legendary drag queens (along with some younger, shorter, stars in the making) united to pull Wigstock out of retirement. Wigstock, a once-annual showcase of New York’s liveliest queens, took a decade-and-a-half hiatus after outgrowing its mid-’80s East Village roots. But this year, the newly minted rooftop event celebrated New York drag, returning with a seven-hour performance rally to be seen and heard from Brooklyn to New Jersey. Helmed by its original founder and mother of New York drag, Lady Bunny, and produced by Neil Patrick Harris, the festival of queens exhibited everything from goth metal lip-syncing to drag king stand-up. 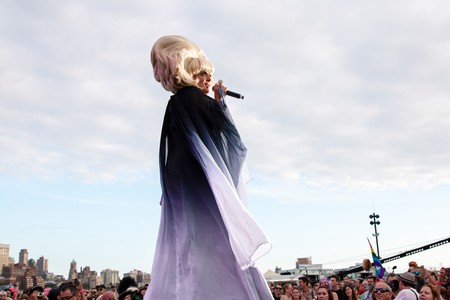 Lady Bunny in chiffon, presenting the next queen to take the stage. | © James Emmerman / Culture Trip

While Wigstock predates some of its own performers, the new iteration of the festival – replete with a massive stage overlooking the Brooklyn Bridge, a customized cocktail bar, and VIP lounge areas – is a far stretch from the 1984 grassroots event that once populated Tompkins Square Park.

It started amid New York’s first drag boom in the ’80s and ’90s, where the now-legendary performers like Lady Bunny, RuPaul, Lypsinka, and Miss Demeanor congregated in the backs of East Village and Chelsea nightclubs, surging with new wave base beats and club kids. Pyramid Nightclub was the mecca of New York’s original drag surge, and on one particular late night, Lady Bunny and a gaggle of queens known as the Fleshtones stumbled their way through Tompkins Square Park, performing for no one but themselves, until the concept dawned on them: a festival for drag queens to perform for the city of New York. 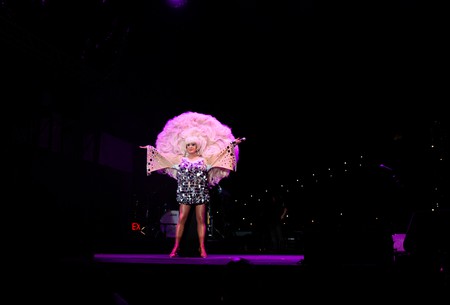 The following year in 1985, 100-some-odd friends and passersby stood around Lady Bunny as she opened the inaugural Wigstock with her rendition of “I Feel The Earth Move.” Over the course of the day, hundreds of spectators grew to thousands. In the two decades to follow, supporters spanning all LGBTQ networks gathered in the park on Labor Day for Wigstock. From early proponents like RuPaul and Boy George to Debbie Harry, Crystal Waters, and Deee-Lite, Wigstock pulled New York drag queens in all their gender-defying performance glory out of the dark clubs and into the New York spotlight. And for almost 20 years, Wigstock found its place in drag queen history – predating the mainstream success of RuPaul’s Drag Race and creating a local visibility that supported all queer communities.

According to legendary drag comedian Jackie Beat, who opened this year’s show stand-up style alongside Lady Bunny, Sherry Vine, and the ironically abrasive Bianca Del Rio, the resurgence of drag in New York is impossible to ignore – particularly with all of its mainstream exposure and success. “It’s great that something that was so underground at one time has gone so mainstream,” Beat said. “And there are good points and bad points to that.” 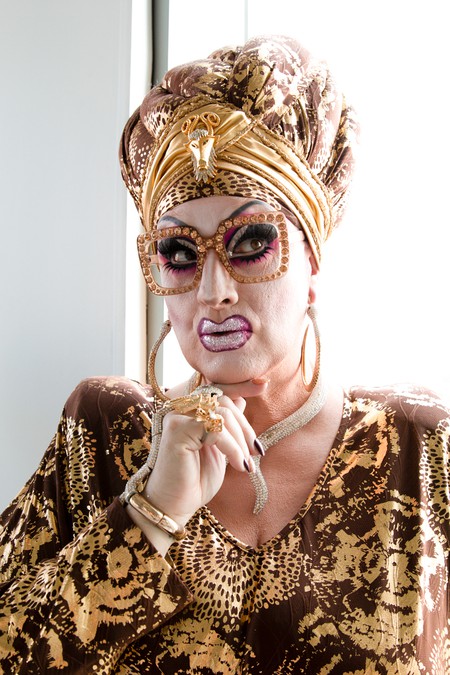 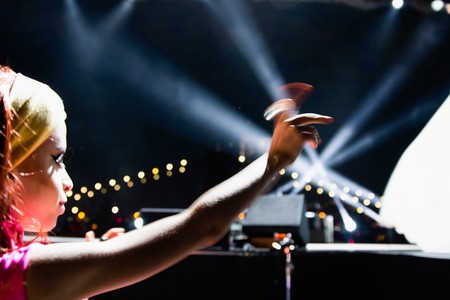 While complaints about surging ticket prices inevitably circulated (they ranged from $100–1,000), Beat is among the many queens who are just grateful for the visibility of local drag. “People don’t know who their neighbors are – gay, lesbian, transgender. And we are here,” said Coco Laching, a performer in the Imperial Court of New York. “With all this interest in RuPaul’s Drag Race, we are here to say this is who we are. And a lot of us started here, at Wigstock, in New York.” 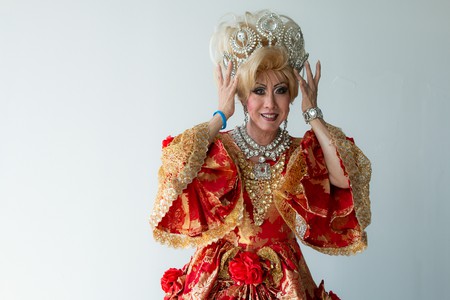 Former Wigstock dancer and notable mainstay in Chelsea’s ’90s club scene, Candis Cayne came out as transgender just a few years after moving to New York. The dancer-model-actress found herself in the midst of Manhattan nightlife, among the queens, where she first learned of trans identification and realized her own gender expression. “I came from Maui where there wasn’t any gay culture,” she said. “When I came to New York, there was the tribe.” Cayne took the stage in a lip-syncing battle alongside her partner-in-performance-crime, Lina Bradford. 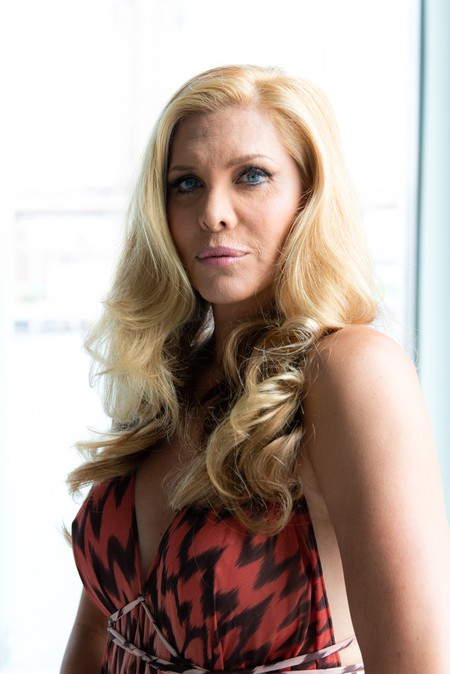 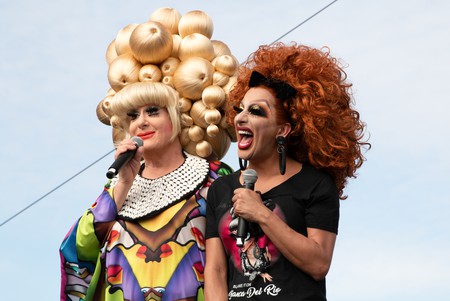 Over the course of seven hours, the old guard of drag queens appeared in full force at this year’s Wigstock – even Darcelle XV, the 87-year-old self-proclaimed world’s oldest drag queen who “performed,” err, complained between song lyrics. “Forty-eight years I’ve been doing this damn song night after night,” she grunted. Opera-singer Shequida took the stage in a white sequin skating suit to belt out high C’s, and Sherry Vine dramatically sang a romantic ode to oral sex (to the tune of “Hallelujah”). And the entire lineup was interspersed with Lady Bunny’s self-pointed quips about drag, insider jokes and references targeting other legendary queens, and a faux feud with high-volume Bianca del Rio, Drag Race’s Season 8 winner and the “Joan Rivers of Drag.”

Still, the old guard made way for new talent to take the stage. A showstopping opening Latin dance sequence from New York’s shining star, Pixie Aventura, represented a new generation in the resurgence of drag. “When I started doing drag, Wigstock was not around anymore,” Aventura said. “I just never thought it would come back – that was the end. But with the popularity of [drag], it’s only logical for us to do this.” 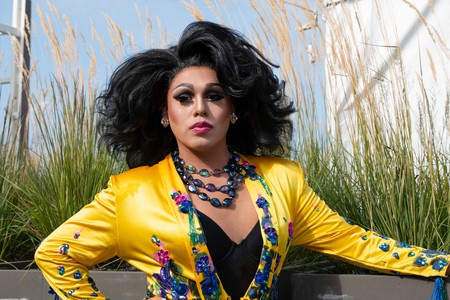 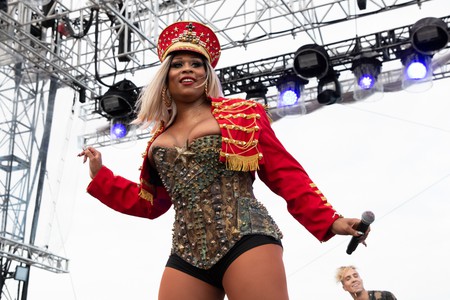 Charlene’s all-red leather cowgirl suit, tassled and cut open at every crevice, was mostly left behind on stage after her electric rendition of Cher’s “Just Like Jessie James.” Before Willam emerged on stage with teased blonde locks, a transparent mini-backpack, riding a hot pink hoverboard, Peppermint lit up the rooftop with her live rendition of a Salt-N-Pepa classic. Peppermint, who is currently debuting in Head Over Heels, is the first trans woman to originate a Broadway principle role. 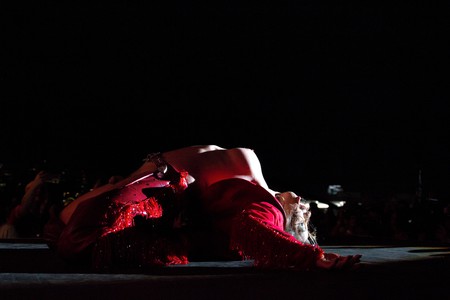 The day continued with other younger performers, including Alex Newell, who formerly starred on Glee as Unique – the show’s first trans character. Nuart was followed by Alaska Thunderfuck, who stripped down from a ’60s-inspired neon swing dress to a leather lingerie suit. In the day’s most memorable musical break, Drew Droege performed a pursed-lipped monologue as Chloë Sevigny, riddled with unknown brand name references and obscure cocktail demands. And later, Latrice Royale literally kicked her heels off in a Whitney Houston trilogy tribute. 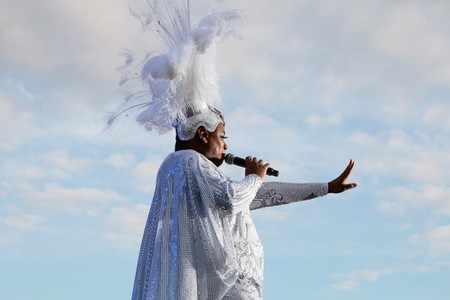 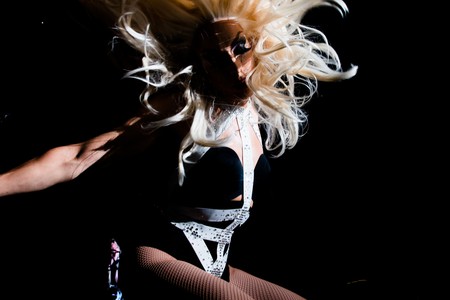 For executive producer Neil Patrick Harris, there was never a doubt that the return of Wigstock was necessary for the greater community. As he took the stage to kick off the show and invigorate the audience with a planned day of queens – old and new – doing what they do best, he also closed out the night in his own drag performance. Accompanied by former castmate Lena Hall, Harris appeared as Hedwig – the title character of Hedwig and the Angry Inch, which Harris originated on Broadway. The six-minute performance ended in Hedwig dousing herself with bottled water before spraying the crowd. 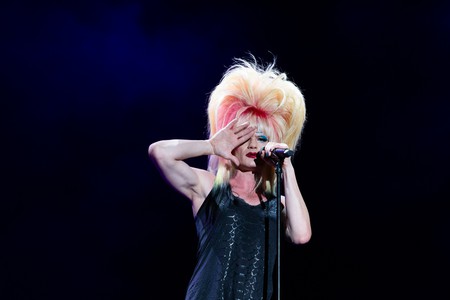 It’s undeniable that mainstream exposure is only a benefit to the drag community and the greater queer community, but Wigstock’s particular resurgence pays homage to its New York roots. The celebration of queens continues on September 8 & 9 at Bushwig – Wigstock’s sister event. And Bushwig’s representation goes a step beyond hair – it’s a call to action (and to partying) for the queer community of New York. As drag queens continue to evolve from the classic beauty queen aesthetic to a freer and more fluid expression of gender, Bushwig pushes boundaries and honors the new wave of New York drag to complement Wigstock’s commemoration of drag’s origins. And newer artists are honing years of energy and inspiration from queens before them to take a stand for their queer community. 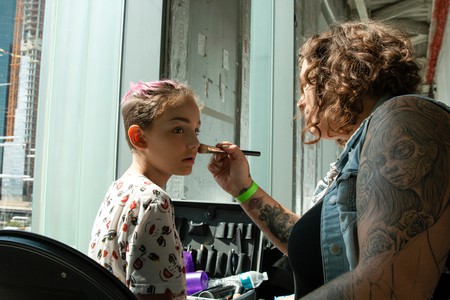 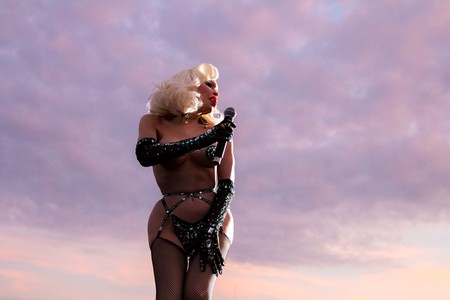 In the fourth hour, a lesser-known duo took to the stage. Lady Quesa’Dilla emerged in a fire-red wig and multi-colored sequin dress. She was a member of the new wave drag, standing there to promote Bushwig, and an unexpected still silence befell the crowd. In an impassioned moment, paying tribute to Wigstock and its heritage of inspirational drag queens, she summoned an unforeseen energy. Borrowing words from the late trans-activist Sylvia Rivera, she asked everyone standing in front of her, “what are you doing for your queer brothers and sisters?” 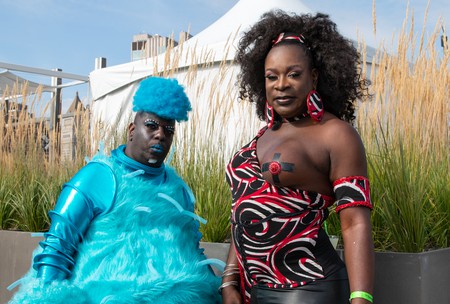 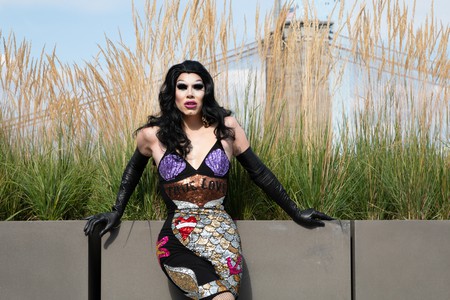 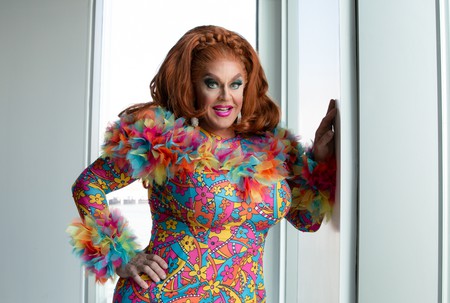 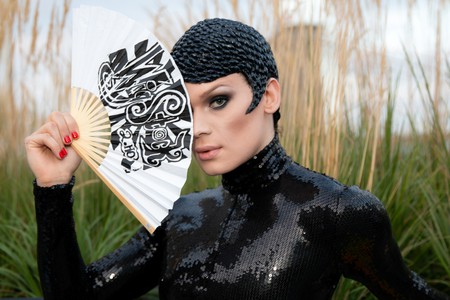 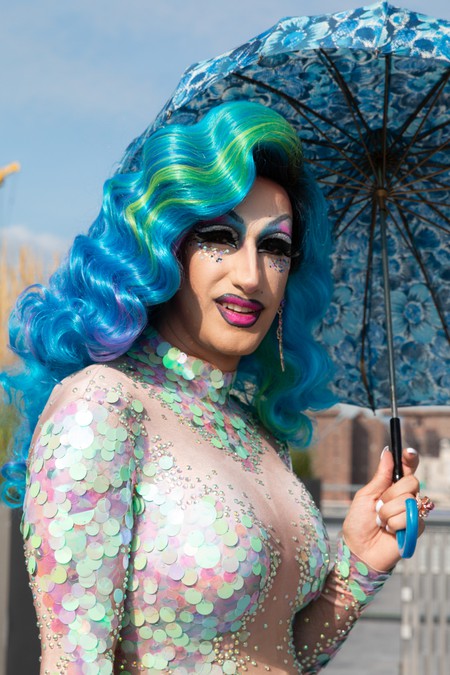 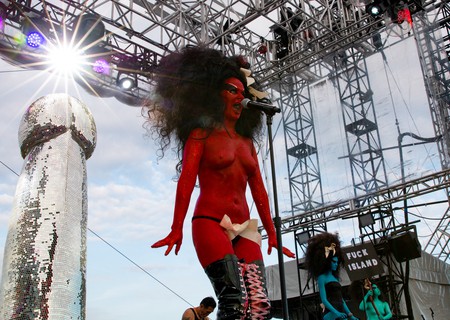 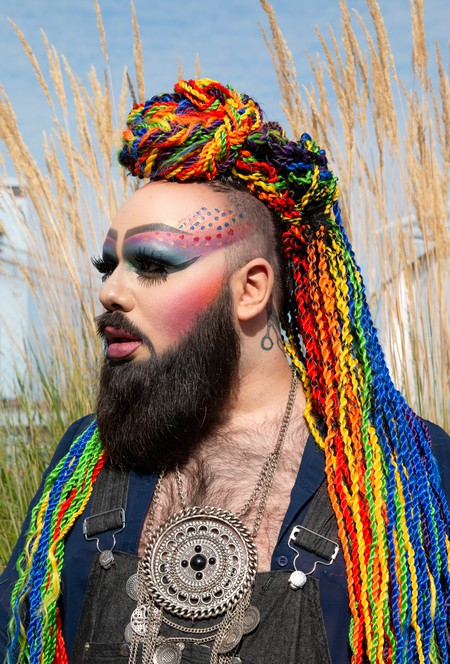 “I love all the queens that are in the show. It’s amazing that Wigstock is back in the city,” Dee Trannybear said. | © James Emmerman / Culture Trip
Give us feedback