"I Love Dick" Is Sexier and More Subversive Than "50 Shades"

Enough already with the twee kink of the 50 Shades franchise. Jill Soloway and Sarah Gubbins’s priceless eight-part adaptation of Chris Kraus’s revolutionary autobiographical novel I Love Dick is both a genuinely raunchy celebration of 39-ish female lust and a wry takedown of performance art pretension. It’s also funny and moving—if not as Dick-friendly as its title suggests.

Dick (Kevin Bacon) in I Love Dick is a rangy, impassive Marlboro man in his early fifties. He has a full head of hair and shifty eyes. He wears a white stetson and rides a horse. He takes solitary skinny dips at dawn, and in the evenings he hunkers down over whiskeys with unemployed ranch hands. He could be Clint Eastwood’s younger brother. 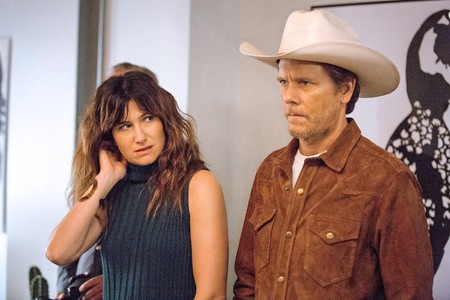 Dick’s sculptures are made of rock and steel, and the first examples we see are rigidly linear. It’s the work of a guy who’s a phallic symbol more than than a complex human being, though he later incorporates curves—the result of seeing a snake and dealing with a smitten woman. Only in the eighth episode does Dick reveal why he is dismissive and mirthless; fleetingly he becomes sympathetic. He also reveals why he saunters rather than walks—and it’s not because he’s the coolest cat west of the Pecos. Dude’s got a foot ailment. 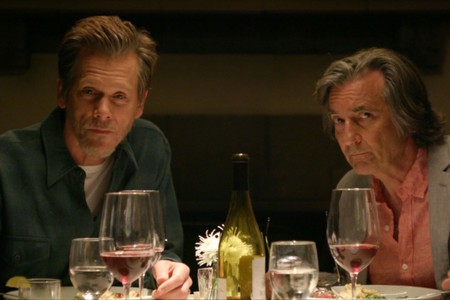 I Love Dick isn’t about Dick, but the midlife crisis he triggers in Chris (Kathryn Hahn), the Brooklyn filmmaker whose cerebral Holocaust scholar husband Sylvère (Griffin Dunne) has accepted a residency at Dick’s institute. Having accompanied Sylvère to Marfa, Chris falls in unrequited lust with Dick at first sight. A kook to begin with, this hyper-articulate woman is suddenly a stammering adolescent klutz in heat, 40 going on 13.

Dick’s disdain for Chris’s pseudo-avant-garde films and his belief that women are bad filmmakers anyway fuel her ravenous desire for him much more than his praise would have done. Hahn, who played the stay-at-home mom in Soloway’s Afternoon Delight (2013), makes Chris’s regression into gaucheness and her masochistic passion enormously touching. It’s a searing comic performance. 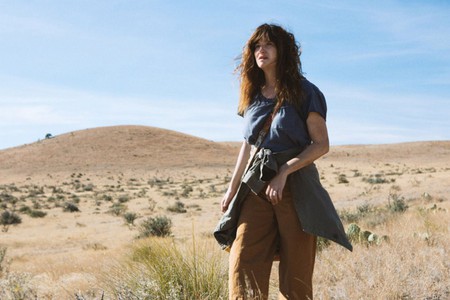 A feminist meditation on the inviolability of the female gaze though it is, the show throws up a major ambiguity. The three ace women directors who worked on I Love Dick—Soloway, Kimberly Peirce, and Andrea Arnold—can’t help but make Chris sexy and beautiful, paradoxically an object for male (or female) gazing. Chris’s desire for Dick, which antagonizes him because men do the pursuing in his ancient world, reawakens Sylvère’s desire for her.

When he asks her to read aloud a letter she has written to Dick that reveals her yearning for him, Sylvère is immediately turned on and their sex drought ends. Their rutting is spontaneous, ungainly, and hilarious. It’s almost the real deal, a little dirty and a lot more fun than the aestheticized coupling of the much younger 50 Shades duo, Anastasia Steele and Christian Grey, with her tricky designer lingerie and his ludicrously ripped bod.

Really (and it’s psychologically simplistic), she’s inviting gang rape; fortunately her playwright girlfriend Devon (Roberta Colindrez) comes to her rescue. The episode in which this sequence appears was directed by Arnold, whose American Honey similarly exposed a vulnerable young woman to industrial workers in a remote rural spot. Arnold is working out something pathological here.

I Love Dick is risky TV, not because it’s explicit, but because viewers not down with performance art won’t get it: they’ll just think Chris and Toby are nuts. The use of a clip from a film by the avant garde director Maya Deren—whom Chris agonizes about—has to be a first for an American comedy-drama series. This is new ground, and it’s exciting.

A savage, wake-up moment comes for poor, doting Sylvère when Chris is pulled away from him and down Marfa’s main street by the magnet in the crotch of Dick’s jeans. Shrugging off her serial humiliations by Dick, Chris eventually acquires power and sexual confidence, less by getting in touch with him than with his land. She then has to discover if his self-regarding monolithic beauty comes packaged with a capacity for passion, intimacy, and sexual abandonment.

Can he live up to the earthy stud muffin he is in her imagination? Does she get Dicked, or Dicked-over? The ending of I Love Dick oddly recalls the ending of the Carey Mulligan movie An Education (2009). It also says be careful what you wish for, you may get it… .

I Love Dick is on Amazon now.