The route between Washington DC and New York connects two of the most important and powerful cities in the US. Proposed infrastructure changes, from floating trains to underground hyperloops, will change the journey forever – if they are approved.

Driving between New York and Washington DC is a dull affair. It’s a five-hour journey and most of it involves the same road: the I-95. Small American towns draw in drivers wanting a breather from the monotony of the freeway with the promise of Waffle House, McDonalds, and other chain restaurants. It’s not an exciting prospect for a traveler looking to experience America.

Those not driving can take the bus, which is cheap, but slow and even more boring. And then there’s the Amtrak train service. The fastest trains can make the journey in less than three hours. But a month in advance, most reasonably timed trains will cost upwards of $93, making it one of the more expensive ways to travel between the two cities. Flights are also an option, of course, but most would seek to avoid time spent at the airport for the sake of a five hour drive or three hour train journey.

The vacuum of infrastructure between the two cities has invited some ambitious plans, including a maglev train, currently only seen in China and Japan, and Elon Musk’s Hyperloop.

Musk has struggled to find a realistic testing site for the Hyperloop, but has received encouragement for the DC to New York route. While transport groups in the US have been excited by Musk’s Hyperloop proposals, and the prospect of an ultra high speed rail in the area, the worry is that the existing infrastructure, which in some cases needs repair and improvements, will be overlooked.

In the summer of 2017, Elon Musk tweeted that he’d been given “verbal government approval” to build a Hyperloop between New York City, Philadelphia, Baltimore and Washington DC. It was later established that Musk had spoken to a White House adviser, son-in-law of Donald Trump Jared Kushner, who had endorsed the plans. Musk’s firm, The Boring Company, has also received the support of Maryland governor Larry Hogan.

In February 2018, Washington DC’s Department of Transportation issued the company a preliminary permit to start digging at an abandoned area of land in the city, according to a report from the Washington Post.

“We’re just beginning, in the mayor’s office, our conversation to get an understanding of what the general vision is for Hyperloop,” a spokesperson for DC mayor Muriel Bowser told the Washington Post, adding, “We’re open to the concept of moving people around the region more efficiently.”

A Hyperloop system uses pods to carry passengers and cars at speeds of nearly 800 miles per hour, in a tube that is sealed with a partial vacuum. Musk claims a Hyperloop journey from New York to DC will take an astonishing 29 minutes.

The maglev train is a similarly distant yet exciting prospect. Known for its use in Japan primarily, the maglev can reach speeds of up to 375 miles per hour. The system works by harnessing magnetic forces that lift the train off the ground and propel it forward at great speeds. They are known as the fastest trains in the world, and it’s thought they could shorten the journey between DC and New York to just one hour. Critics have questioned the demand for the maglev train and its cost, but those pushing for the new system say it will help ease congestion on one of the most well traveled corridors in the world. 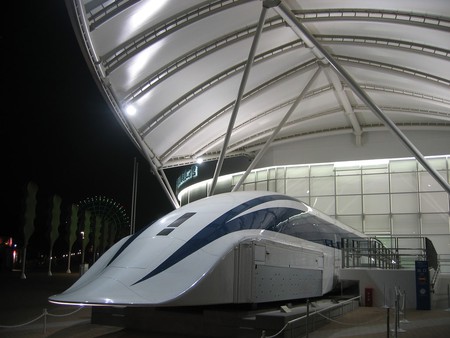 A maglev train on display in Japan | © Dom Pates / Flickr

“The corridor is one of the most vibrant corridors on the Earth, arguably the most vibrant on Earth,” says Art Guzzetti, Vice President of policy at the American Public Transport Association. “The nation has an economic gold mine right here, and it’s sad the lack of attention it’s received. It’s a very developed corridor so projects aren’t easy to have there but you certainly have the economic centers, you have wealth in the corridor that can sustain a lot of traffic.”

Guzzetti talks about both the Hyperloop and maglev train proposals with excitement, but also urges caution against overlooking other needs of the infrastructure. “What we have to be careful about doing is to say there’s this new vision of Hyperloop thus we can halt other plans that are underway. That wouldn’t be good, that would be a recipe for disaster,” he says. “We can’t say we’re going to halt addressing crying infrastructure needs because something might happen in the future. In fact we’re dealing with backlog needs here.

“If something better comes in the future then good, let’s move that into place. On the plus side, the travel demands in that corridor are so robust, you may well have more than one way to go where you’re going: that’s not bad news.”