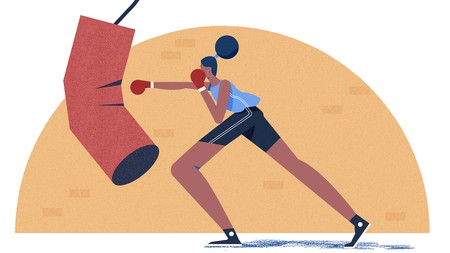 Culture Trip examines how female gymgoers have influenced the evolution of boxing, transforming it from a male-dominated ‘sport of the underdog’ to a practice of personal development and physical empowerment.

The floor at Box + Flow, a fitness studio located in lower Manhattan, is polka-dotted with sweat droplets. A room full of people with firm stomachs and expensive activewear jab and hook at Everlast bags suspended from the ceiling, then throw their gloves aside and drop onto a yoga mat, assuming downward-facing dog poses.

“I see Box + Flow as less about fitness and more about life – resistance and ease, struggle and celebration,” says Olivia Young, a former restaurant brand director who opened the boxing-meets-yoga studio 18 months ago. “There was something about boxing that kept my focus on point. It gave me this feeling that I could do anything. And what yoga did on top of that is keep me grounded. I think you need both – it comes back to that balance of being strong but also being soft.”

Young, who hails from Miami Beach, started boxing aged 20 after discovering a fight gym near her home. Rather than feeling intimidated by the atmosphere – barebones, competitive and a bit grimey – she was attracted.

“I would go to yoga every day and I would walk by a dirty boxing gym,” she explains. “One day I popped in and it was a bunch of sweaty men in weird wrestling shorts and disgusting facilities, and I liked the grit.”

Yoga and boxing might not seem like an obvious combination, but the sport has been reimagined by the boutique-fitness industry – its signature grit replaced with a sleeker, cleaner aesthetic and a mind-body approach. 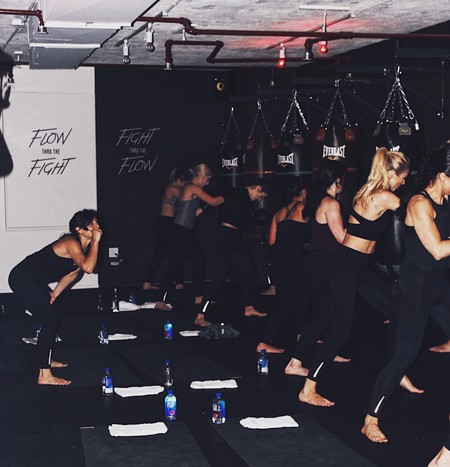 At Gleason’s – a world-famous fight gym in Brooklyn’s DUMBO neighborhood – the walls are painted fresh-blood red. Beaten-up bags are patched up with silver duct tape. It’s an unmistakably masculine look that’s remained relatively unchanged since its opening in 1937.

The current owner, Bruce Silverglade, has been running Gleason’s since the early ’80s, when it catered solely to male athletes – amateurs and pros who wanted to train at the same facility as Muhammad Ali and New York’s hometown champion Jake LaMotta. In the midst of a recession, the partners of Gleason’s decided to close the gym early three nights a week and let women train, despite the taboo around female fighters. It was a first in the industry.

“Day one, women were flocking into the gym, and amazingly they turned out to be tremendous athletes,” says Silverglade. “They trained very very hard – harder than most of the men … A woman would come into the gym and say, ‘listen, I don’t know anything about boxing. Teach me.’ They would start ground zero and work their way up, and it was easy – they followed your instructions. The men would come in all macho with an attitude of ‘I know how to fight, I can beat anybody up,’ and it takes you months to break down those bad habits and get men to the place the women were at from day one.”

Vanessa Chakour, a herbalist and ex-professional boxer from Brooklyn, trained at Gleason’s from 2000 to 2005. She’s seen women’s boxing grow into the mainstream over the last decade thanks in part to blockbuster movies, high-profile fighters, and a curious amount of supermodel endorsement.

“I remember when I was fighting before people would be so shocked that a woman would even go and box,” Chakour says. “So the fact that more women are doing it, it’s more accessible and it’s such a great outlet for pent up aggression or just feeling empowered – that part of it is great.”

Chakour retired from professional boxing years ago, but still incorporates training into the wellness retreats she runs. She views boxing as a way to challenge her body and mind, confront her fears and push the limits of her own capabilities. 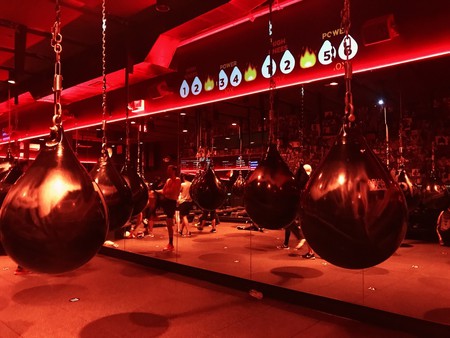 Processed with VSCO with nc preset | Courtesy of Rumble Boxing

Even for those whose goal is simply to get in shape, boxing provides much more than a good sweat. It bolsters self-control and self-confidence. And for women, who aren’t often granted the freedom to be outwardly ferocious, it’s physically empowering. Perhaps that’s why boxing has been embraced so thoroughly by the boutique-fitness industry, the primary consumers of which are twenty- and thirtysomething females.

ClassPass currently lists 165 workouts in the New York metro area that take inspiration from boxing, but there are plenty more studios not signed up with the fitness-booking app. Rumble, for example – a slick venue with unique teardrop-shaped bags and a nightclub-quality sound system – charges $36 for a single session. After winning investment from fitness behemoth Equinox, it plans to expand rapidly throughout New York City and beyond.

“The workout is intoxicating,” says Brian Cubero, a trainer at Rumble. “The passion of the instructors, the energy of 60 people side by side giving it their all, the thumping music … that’s what keeps people coming back. After 10 hard rounds they walk out drenched in sweat and feeling like a badass.”

In some ways, boutique boxing studios like Rumble are training grounds for a fight gym. Gleason’s has seen an influx of new members over the last couple of years – many of them women wanting to graduate to sparring.

The appeal of boxing isn’t simply about physical conditioning or feeling like “a badass”, the sport has a philosophy, a history and a culture that hooks people. Vanessa Chakour calls it “a spiritual practice” and a way to “develop the whole self”, likening the sport to yoga in that sense.

After 38 years at Gleason’s, Bruce Silverglade believes mental focus in the ring equates to a more gutsy disposition in general, helping fighters navigate their work and homelife more competently. Silverglade explains how boxing helps people understand “what fear is”, which is knowledge they can use outside of the gym.