In 1942, the Hollywood star Hedy Lamarr co-patented a torpedo anti-tracking system that could have helped the Allies win the war at sea. A new movie chronicles how the authorities scoffed at her invention and urged Lamarr to use her glamour to sell war bonds.

Alexandra Dean’s Bombshell: The Hedy Lamarr Story, an American Masters documentary launched at the Tribeca Film Festival, partially addresses the curse of beauty. Given that the Viennese immigrant was marketed as the “most beautiful woman in the world,” her journey as a “love goddess” manipulated and discarded by Hollywood, was especially humiliating. 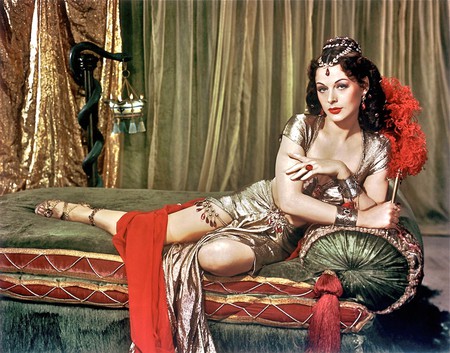 So, too, was the US Navy’s rejection of a torpedo anti-tracking and anti-jamming system patented by Lamarr (under her then married name Hedy Kiesler Markey) and her avant-garde composer friend George Antheil. Lamarr had learned about munitions when married to the Austrian arms mogul and Mussolini friend Friedrich Mandl between 1933 to 1937.

Bored by the kinds of movies she was offered, the MGM contract player had developed an interest in scientific inventions. She dreamed up a cola-flavored soft-drink cube. She impressed Howard Hughes, one of her lovers, with a design for airplane wings modeled on fish fins and bird wings.

Lamarr and Antheil met over a piano at a dinner party. She supposedly asked him for advice about how she might enhance her modest bust. They then talked about World War II. Lamarr had been disturbed by the sinking of the SS City of Benares, which had been carrying 90 child evacuees from Britain to Canada, in September 1940.

She believed the Allies could defeat Germany by sinking enemy ships with radio-controlled torpedoes. Their effectiveness was dependent on preventing the torpedoes being thrown off course by the targeted vessels broadcasting signals on the same frequency as the control signals, in order to jam them.

Drawing on papers and diagrams presented on screen by Lamarr’s son Tony Loder, Bombshell deploys delicate animations to explain how Lamarr and Antheil’s “Secret Communications System” proposed to manipulate radio frequencies at irregular intervals—”frequency-hopping spread spectrum”—to form an unbreakable code. Antheil’s contribution was to propose the use of a coded tape, the equivalent of a piano roll, to change at random intervals the signal sent between the control center and the torpedo. 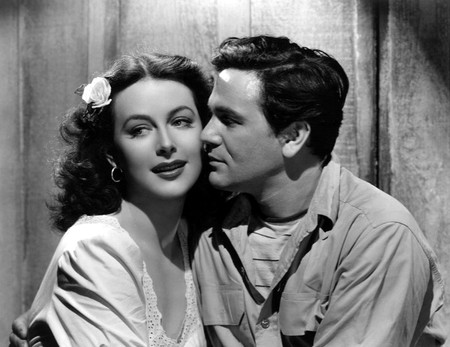 Lamarr and Anthiel received a patent for their invention in 1941, but the Navy considered the idea impractical and decided not to implement it. (It’s hard to believe the suggestion made in the film that the Navy thought actual pianos would be required for frequency-hopping.) When Lamarr tried to join the National Inventors Council, she was allegedly told by its head, Charles F. Kettering, that she could better serve her country by selling war bonds.

“You don’t get to be Hedy Lamarr and smart—no!” observes the film historian Jeanine Basinger in Bombshell. The film reports that Lamarr, who danced and chastely kissed a lot of soldiers at the Hollywood Canteen and on war bonds tours, raised $25 million (the equivalent of $340 million today). 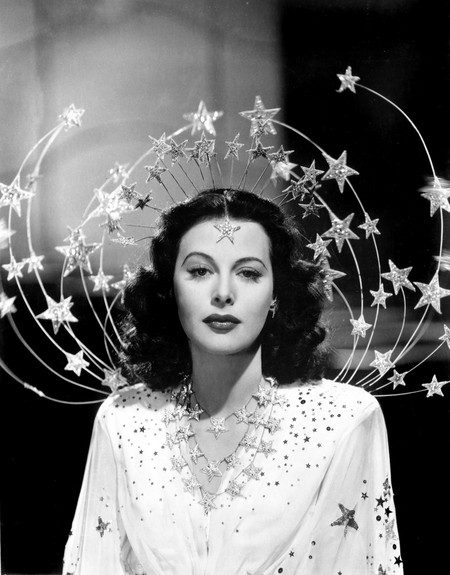 ‘The Ziegfeld Girl’ | Photo courtesy of the Everett Collection

The patent, absurdly seized by the government as the property of an enemy alien, eventually languished. Lamarr never benefited financially from the invention’s use by naval ships during the Cuban Missile Crisis. But she had made a bolder effort than John Wayne or Errol Flynn to conquer the Axis Powers. She alone among the Hollywood elite anticipated Wi-Fi.

Three years before her death at the age of 85 in 2000, she became the first female recipient of the BULBIE Gnass Spirit of Achievement Award for inventors. That same year, she and Antheil were awarded the Electronic Frontier Foundation Pioneer Award.

Reading clippings on Lamarr’s scientific accomplishment requires wading through a sustained and ongoing sexist commentary on the phenomenon of such a beauty also having “brains.”

“With IQ numbers as impressive as her hip-and-bust measurements, she offers her mind to the war effort,” jocularly recounted the Chicago Tribune in a story headlined “Brainy Beauty” in 1997. “But the military brass takes one look at her figure and face and decide that her contribution would be to prance around nightclub and vaudeville stages selling war bonds… .” 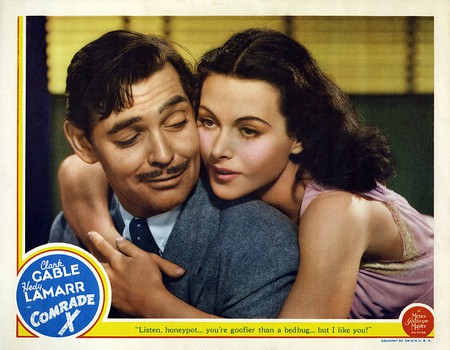 The woman born Hedwig Eva Maria Kiesler on November 9, 1914 was trapped by her exquisite looks, which were notoriously exploited when she was 17. Her nude idyll and simulation of orgasm in the Czech-Austrian Ecstasy (1933) would prefigure her Hollywood career.

As Bombshell relates, MGM chief Louis B. Mayer, who divided his actresses into madonnas and whores, didn’t place Lamarr in the first category. Beginning with Algiers (1938), she was typecast as a seductive exotic. Her excellence in a rare dramatic role in H.M. Pulham, Esq. (1941) was rewarded with trash like White Cargo (1942); her dusky “tropical temptress” Tondelayo in that film belongs in the camp hall of fame. She was unable to repeat her triumph in the box-office smash Samson and Delilah (1949), in which she put conviction and wit into feigning carnality.

In 1937, Lamarr had escaped the possessive Mandl by doing a moonlight flit disguised as a maid—MGM should have cast her in a movie version. Her union with him established her pattern of marrying men who regarded her as arm candy.

None of Lamarr’s four subsequent marriages were happy. Interviewed in Bombshell, her son Tony and daughter Denise Loder-DeLuca, Lamarr’s children with the English actor John Loder, her third husband, praise her mothering skills. Tony admits that her addiction to amphetamines (injected by Max Jacobson, “Dr. Feelgood” to the stars and President Kennedy) caused her to act irrationally.

She had allowed their stepbrother James Loder, her son with her second husband, screenwriter Gene Markey, to drift away from her when he was at military school. Though they spoke on the phone, they didn’t meet again for over forty years, James glumly remarks in Bombshell.

The nadir was Lamarr’s arrest for shoplifting in 1966. Disfigured by primitive plastic surgery, she ended her days as a recluse in Florida. The home movie footage (presumably taken by one of her children) that shows her pottering around her apartment as an octogenarian is hard to watch only if one over-values the Aphrodite of the 1930s and 1940s.

She herself decried her image: “Any girl can be glamorous. All you have to do is stand still and look stupid.” History, fortunately, is reclaiming Lamarr as a brilliant thinker, no longer defined primarily by her beauty.